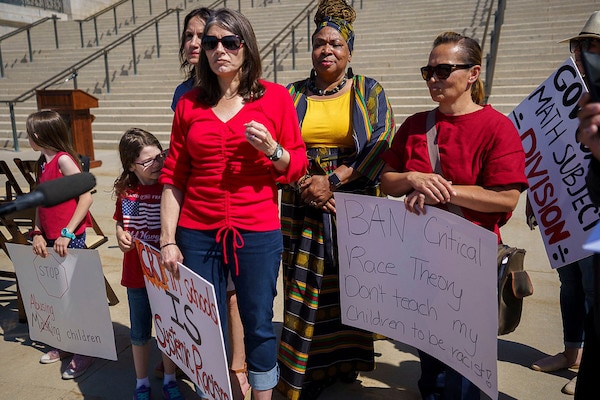 Some 25 states have already enacted or are considering laws to ban teaching what they call “critical race theory” (“CRT”) in public schools, a concept that school officials around the country deny they even teach. A parents’ group in Washoe County, Nevada wants teachers to wear body cams, just to make sure. And Ted Cruz just charged that CRT is “every bit as racist as the klansmen in white sheets.”

As a law professor closely associated with the critical race theory movement for more than 30 years, I am astonished. Most academic work never gets noticed at all, and ours is being publicly vilified, even banned. While we wrote footnotes and taught our classes, did our ideas become the new orthodoxy in American society and the foundation of K-12 education, as our critics charge?

CRT is not a racialist ideology that declares all whites to be privileged oppressors, and CRT is not taught in public schools.

But over the past nine months or so, first slowly in right-wing media conversation and now quickly in state houses and even mainstream newspapers, conservative activists have branded all race reform efforts in education and employment as CRT—a disinformation campaign designed to rally disaffected middle- and working-class white people against progressive change.

If you understand what CRT actually is, though, it’s easy to see that it has nothing to do with the cartoonish picture of reverse racism that its critics depict. And, more importantly, CRT is a pretty good lens for understanding why the campaign against it has been able to spread so fast.

CRT, in the real world, describes the diverse work of a small group of scholars who write about the shortcomings of conventional civil rights approaches to understanding and transforming racial power in American society. It’s a complex critique that wouldn’t fit easily into a K-12 curriculum. Even law students find the ideas challenging; we ourselves struggle to put it in understandable terms. We embrace no simple or orthodox set of principles, so no one can really be “trained” in CRT. And if teachers were able to teach such analytically difficult ideas to public school students, it should be a cause for wild celebration, not denunciation.

The common starting point of our analysis is that racial power was not eliminated by the successes of the civil rights movement of the 1950s and 1960s. That movement succeeded in ending the system of blatant segregation reflected in the “Whites Only” and “Colored” signs that once marked everyday life in America—but in its wake, in the 70s and the 80s, racial-justice reform in countless institutions was halted by old-guard resistance.

For example, as a first-year law teacher in the early 1980s, I served on the University of Virginia Law School admissions committee. UVA had been regularly admitting a tiny number of Black students for some 15 years by then. But some of my colleagues serving on the admissions committee were the very same people who had administered the school when it was segregated. The rules had changed, but they were still in charge. So, there they were, decades after formal desegregation, insisting categorically that all graduates of historically Black institutions were unprepared for the rigors of law study at such an elite school like Virginia, and voting against their admission.

The same story was playing out in institution after institution. The “Whites Only” signs were gone, but the racial power remained in a myriad of social practices—now couched in the language of race-neutrality, such as the old guard administrators’ professed concerns about “standards,” and their ideas about what those standards should be.

CRT was first articulated in the 1980s by a new generation of scholars who confronted this kind of racial power in the universities we attended and in the law schools where we would eventually teach. As American constitutional law embraced “colorblindness” as the ideal of racial justice, we focused on all the ways that racial power was exercised in supposedly “colorblind” ways. And while we have a number of different approaches and beliefs, our shared goal—broadly speaking—is to understand how those subtler racial power structures work, how they often pose as “neutral” institutions in law and society, and how to undo the injustices they’ve been causing.

From the viewpoint of traditional liberal thinking, the problem of “civil rights” was that the policy of racial integration was never implemented strongly enough. But, from a critical perspective, Black students getting admitted into mainstream institutions wasn’t enough to achieve racial equality—because once inside the gates, they confronted norms organizing what was taught and how it was taught that had been created exclusively by whites operating in all-white institutions. There were, or could be, racial power dynamics embedded even in what was called “knowledge” in academia or “neutrality” in law. Rather than seeing “racism” as an irrational deviation from rationality, we began to explore how liberal categories of reason and neutrality themselves might bear the marks of history and struggle, including racial and other forms of social power.

Critical race theorists analyze social practices—and the law is a social practice—in terms of how they help to construct or maintain the subordination of the Black community. We reject “colorblindness” as an ideal because being conscious about race is the only way to tell whether the situation of the Black community is improving or not. As appealing as colorblindness might sound to some, it’s also dangerous: It can lull decision-makers, wrongly, to assume that once they no longer explicitly discriminate along racial lines in admissions or hiring, then racial power no longer plays a part in social life.

So, in thinking about police reform, a CRT perspective would focus on the historical relations between the community and the police, rather than simply on the idea of neutral enforcement of rules like probable cause requirements. (The idea of imposing race-neutral standards of “reasonableness” on police is hollow in the actual context of white suburban police officers sealed off in high-tech patrol cars patrolling the urban streets of Black neighborhoods.) Similarly, to counter claims that “objective” market forces explain the continuing wealth inequities between Black and white America, a CRT perspective would highlight the long history of discrimination—in employment, in real estate, in education and healthcare—that built and still underlies the economy we have today.

We likewise question the traditional ways that liberals have defended affirmative action as a useful exception to a presumed race-blind ideal of “merit.” To us, the very definitions of merit reflect racial and other forms of social power.

Asking critical questions about widely shared values always makes people uncomfortable, and understandably so. The opponents of CRT seize upon our critique of the ideology of colorblindness to charge that we are divisive—or, as Ted Cruz put it, that we are in fact racist. But colorblindness is an empty ideal that works to ensure confirmation of its own premises: If one is not permitted to see the social consequences of policies in terms of race, then the disparate racial effects of policies simply become invisible. Racialized police violence disappears when no racial statistics are kept on police interactions. Racial redlining looks like simple risk-based pricing if one doesn’t look at the racialized ZIP code results. The way to end racial subordination is to end it in fact, not to define it away.

In contrast to being racially divisive, the “critical” part of CRT holds that there is no objective and neutral idea of merit that could explain the distribution of wealth, power, and prestige in America. The unfairness extends to whites as well as to Blacks, and to all those whose place on the hierarchies of American life are supposedly legitimated by ways that “merit” is defined by the professional classes.

CRT is a powerful lens for understanding the racial dynamics of the current cultural situation. The campaign against CRT has spread so fast in large part because of how narrowly traditional civil rights approaches comprehended racial power. As the civil rights “revolution” of the 1960s was institutionalized in American cultural understanding, whites were taught to understand racism simplistically in terms of bad individuals who carry around racist ideas. The “redneck” Southern sheriff became the consensus villain for mainstream America.

But such a simplistic analysis of racial power meant that there was never a national reckoning with the subtle and systemic effects of American apartheid, as they marked schools and workplaces over multiple generations. And if racism means identifying bad actors, as the conventional image holds, then whites are understandably anxious that renewed attention to all these forms of institutionalized racial power means that they will be blamed and shamed.

It makes sense that the depictions of CRT by its opponents bear so little resemblance to our actual work and ideas. Like the invocation of Willie Horton in the 1980s and affirmative action after that, the point of those who seek to ban what they call “CRT” is not to contest our vision of racial justice, or to debate our social critique. It is instead to tap into a dependable reservoir of racial anxiety among whites. This is a political strategy that has worked for as long as any of us can remember, and CRT simply serves as the convenient face of the campaign today—a soft target.

The multiracial, multigenerational popular mobilization in the wake of the murder of George Floyd last summer is a sign that the old strategy is weakening. And, while it is a lie that CRT itself is being taught to elementary and high school students, it is likely true that many teachers and administrators in school systems across the country have been motivated since George Floyd’s murder to include themes of racial justice in their schools.

This basic effort to tell the truth—the inspiring as well as the ugly—about American history and government must be encouraged, not denounced. Most readers can recall in their own educations the tired and idealized cartoons of civics and American history that has held sway for generations in American schools. It is a good thing that teachers and other school officials are trying to change that by taking a more thoughtful and accurate approach to our history, and being more honest about what needs fixing. And as they do, it’s worth bearing in mind that what’s really under attack right now isn’t the bogeyman of “critical race theory”— it’s the modest and long overdue change being ushered in by teachers and school administrators. They may never have heard of CRT, but they intuitively understand why it exists—and rightfully see the absurdity of the conservative charge that teaching about racism is itself racist.