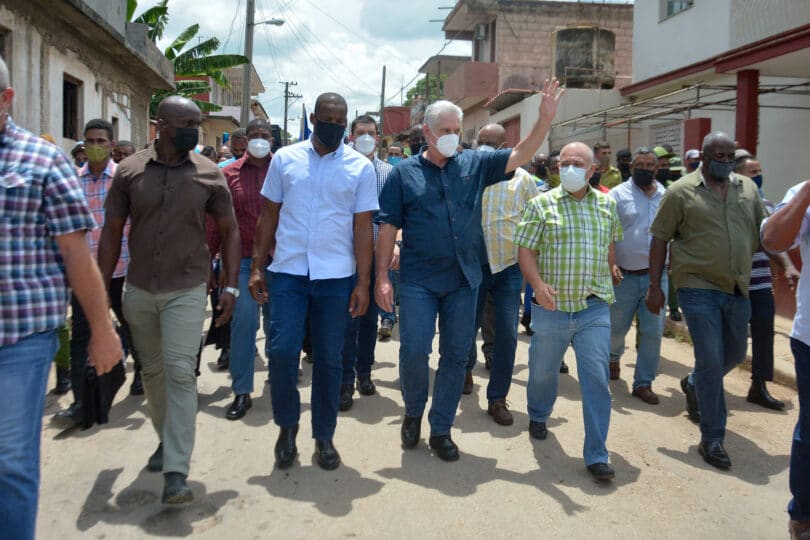 The imperialist media and its camp followers are over-active in circulating the news: Protests and loot in Cuba. Then, they draw conclusion: The people in Cuba are rejecting socialism.

Thus, the media-masters cheer and draw conclusions while they show their ignorance in ignoring the demarcation line between socialism and communism, as the two systems are far-far different.

Nothing to hide: There are protests in Cuba.

Nothing to hide: There’s are incidents of looting.

The issue for consideration is what goods were looted. Do food-hungry people loot TV and electronics goods? Were not there reports of loot of food products and clothes in cities in the Empire months ago while a section of the populace was raging in protests demanding justice? Those people were at least a bit hungry, at least a bit deprived of clothes. The stories of unemployment and homelessness are another issue for another story. And, there’re reports on members of an important organization of the state machine in the Empire, who were facing hunger, were facing difficulty in procuring food due to salary-shortage.

The Empire is resource-rich. This richness goes for hundreds of years. This richness comes from accumulation of wealth from all corners of the world. The Empire has never, till now, faced any economic embargo.

How many reports the MSM have produced and circulated on the issues? Which of the MSM can claim that that has circulated reports on the way Cuba’s procurement of raw materials for producing Coronavirus-fighting vaccines was stalled, and who the actors were behind this stalling of a nation’s fight against pandemic? How many reports have the MSM carried on Cuba’s unprecedented help to countries including a member of the powerful G-7 in fighting the pandemic? How many reports on Cuba’s research and successful production of vaccines to fight the coronavirus the MSM have circulated? How many reports on the Cuba’s fight against the pandemic. Despite the Empire-imposed embargo, Cuba is the first country in Latin America that has successfully developed and produced two coronavirus vaccines, and has vaccinated over a quarter of its population with at least one dose while suffering a severe shortage of syringes due to the Empire-imposed embargo. Has the MSM reported on this? Has a comparison between Cuba and countries with a fat foreign exchange reserve and well-developed infrastructures been made ever? The countries to be compared are not only in Europe. They are in South Asia and South-East Asia also; and a few of these countries have nuclear arsenals, and they regularly tests missiles that can carry nuclear arms and can travel hundreds of miles. “Success”, it’s “success”, “success” at playing with vehicles of death! How many critical stories by the MSM are there on that?

And, the defeat and loss of face of the Empire in the UN General Assembly, which has turned into an annual event now? That was on withdrawal of the embargo on Cuba. Only 2-3-4 countries including the Empire oppose the resolution while rest of the countries stand for the withdrawal of the decades-long illogical embargo imposed on Cuba. Silence there! It’s the MSM-silence!

Isn’t it hypocrisy when reports of protest are partially presented and other basic facts that expose the reality, a major part of which has been created by the Empire, is circulated with electronic speed?

What happened when one of the countries claiming to be the “biggest democracy” abruptly and suddenly imposed joblessness and homelessness on millions of migrant workers? They’re not looting food stores. The helpless walked miles, many of them walked hundreds of miles with wife and children as they frantically tried “fleeing” away from hunger and the pandemic to reach their rural homes. That hundreds of miles-journey was unimaginable!

This subcontinent, during its colonized days, faced famines that took millions of lives. In Kolkata, how many cars of the colonial rulers were turned over, how many stores were looted?

Today, it’s well-known that the geographically small country of Cuba is plagued with shortages of basic necessities—a result of the Empire’s never-ending embargo. The embargo is the Empire’s position on “human” rights –in fact an embargo on humanity!

Who denies the pandemic situation—food situation deteriorated by the pandemic? Aren’t countries, from India to the Empire, facing the situation?

Marco Rubio, U.S. Senator (R-Florida) well-known for his diehard anti-Cuban Revolution stand, pleaded with U.S. president Joe Biden and secretary of state Antony Blinken to urgently “call on Cuban military forces to not fire on their own people.”

US Representative Nicole Malliotakis (R-New York) said: “I hope and pray for a free Cuba for my relatives and all suffering under its unbearable communist rule.” [“Communist” rule is “unbearable”, and capitalist rule—capital’s yoke on billions making billions hungry, making millions cannon-fodder is “bearable.”] Nicole Malliotakis felt encouraged as the “protesters” were demanding an end to their “misery”.

Florida Governor Ron DeSantis said on Twitter: “Florida supports the people of Cuba as they take to the streets against the tyrannical regime in Havana. The Cuban dictatorship has repressed the people of Cuba for decades and is now trying to silence those who have the courage to speak out against its disastrous policies.”

These actors are enough to expose the character of the “protest”, of the “protesters”—siblings of the now well-known organizations from the Empire funding “democracy” projects in countries considered not the Empire’s camp.

These actors are politicians telling “facts”, standing for “freedom”; and yet these actors’ actual acts and utterances—political position—are enough to take away all the credibility of the Cuba-story they’re telling.

They are silent about their funding of subversive activities to topple the revolutionary system in Cuba. They don’t reveal the enormous amounts already spent for “democracy” propaganda in Cuba.

These actors’ loss of credibility makes the contrary claim Miguel Díaz-Canel, the president of Cuba, has made credible: External forces have incited and expanded the protest. The Empire’s media campaign is manipulating sincere protest. In a broadcast to the people of Cuba, Díaz-Canel said:

We are calling all the revolutionaries in the country, all the Communists, to hit the streets wherever there is an effort to produce these provocations.

The Cuba “protest-story” is not a single incident. Similar foreign interference happened in other countries. The Cuba-protest-incident is not going to be last attempt by the Empire. In countries in regions including the South Asia, the Empire is organizing its “democracy” campaigns. There its “democracy”-mongering organizations are funding and training organizations, groups and individuals for carrying out the Empire’s design.