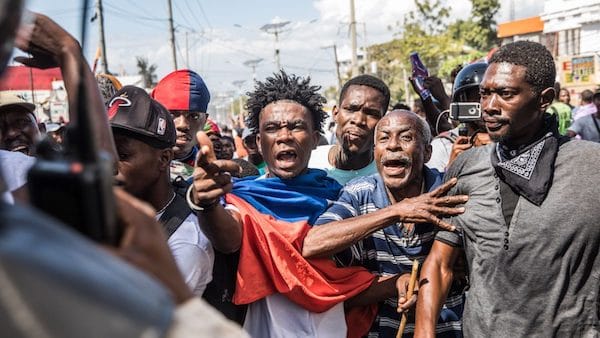 Demonstrators marched in Port-au-Prince on February 14, 2021, to protest against the government of President Jovenel Moïse. (AFP)

U.S. President Joe Biden and the Democrats have been playing the “Black Lives Matter” tune on their fiddle. Biden even raised the issue of Black Lives Matter during his presidential campaign. But, just days after Biden was sworn into office, his administration lent support for the Haitian dictator, Jovenel Moïse, who stayed in office past his term to the dismay of the Haitian people, who flooded the streets in protest.

Now, Moïse is dead and the United Nations has decided who will be the new president of Haiti. We see the racist irony. The people of Haiti have not been allowed to weigh in. The white rulers have made their decision, as the Black Alliance for Peace (BAP) stated in its July 9 press release.

And while the director of Colombia’s National Intelligence Agency and the director of its national police’s Intelligence Division are in Haiti to investigate the role of Colombia in the assassination, those agencies have not launched investigations into police forces and paramilitary elements involved in the recent killings of peaceful protesters in Colombia, a client state of the United States.

Accepting the recommendation from the United Nations Special Envoy for Haiti that contested Prime Minister Claude Joseph would be the new president is the ultimate in Western arrogance. The white West is continuing its white-supremacist narrative that the predominately African/Black population of Haiti cannot govern itself. What is really going on is the U.S./EU/NATO Axis of Domination is working through the “Core Group” to ensure Haiti remains subordinate to its interests. The United States remains in the lead of that axis.

That is why we say Biden and Democrats could care less about Black lives.

In fact, Biden was famously quoted in 1994 as saying, “If Haiti just quietly sunk into the Caribbean or rose up 300 feet, it wouldn’t matter a whole lot in terms of our interest.”

Is this the man and are Democrats the people Africans and other colonized people around the world are supposed to trust with our lives?

No, they are committed to one thing: The perpetuation of the pan-European colonial-capitalist project that has been underway for more than 500 years. That ideological foundation explains why they do not believe in the inherent dignity of all human beings. Hence, the double standard in place: The pretense of democracy and the rule of law for them and colonial fascism for the nations and peoples of the global South.

This is why the white West’s deployment of “humanitarian intervention” because of the “Responsibility to Protect” is so cynical. The West is responsible for the barbaric treatment and conditions colonized peoples have faced for centuries. The U.S. ruling class has shown nothing but contempt for the lives of workers inside its borders and for the millions worldwide who live in abject poverty as a result of the global U.S.-dominated capitalist-imperialist system.

Why the concern about Muslims in China while Biden and Democrats greenlight Israel’s war crimes against predominately Muslim Palestinians?

Whenever the United States raises humanitarian issues—be it in the Horn of Africa or in China—we know it can only mean one thing: The United States has strategic interests that have nothing to do with the humanity of the people they pretend to care about.

That is why BAP will continue to tell the truth, no matter the consequences.

On the June 29 episode of WPFW (89.3 FM-Washington, D.C.)’s “Voices With Vision,” co-host Craig Hall put together a special mix in honor of the 80th birthday of our late elder-comrade Kwame Ture. Netfa Freeman, who represents BAP member organization Pan-African Community Action (PACA), interviewed Sara Flounders about the little known case of Alex Saab, a Venezuelan diplomat who the United States has subjected to extraordinary rendition—meaning kidnapping, imprisonment and torture—in Cape Verde off the Atlantic coast of Africa, part of the ongoing U.S. policy targeting Venezuela. Craig and Netfa kicked the show off with a short exchange about how the United States is a rogue state, representing the biggest threat to peace and security on the planet. This episode included a portion of the song, “North Star,” by Mumu Fresh featuring D Smoke, and the song, “Never Ever Submit To Authority,” by the Antibalas’ Afrobeat Orchestra.

The July 6 episode of “Voices With Vision” aired Netfa’s remarks from a rally in front of the Department of Justice in Washington, D.C., on the 19th birthday of Tamir Rice—one of the many but not forgotten victims of police terror. Margaret Kimberley, senior columnist at Black Agenda Report, provided commentary on defunding the police. PACA members revisited Dhoruba Bin Wahad’s essay, “Toward Rethinking Self-Defense in a Racist Culture,” addressing what they believed they didn’t get right the first time. Political prisoner Mumia Abu Jamal shared a tribute to longtime MOVE member Consuewella Africa, who recently passed away and became an ancestor after a lifetime of struggle.

Hood Communist co-editors (some of whom are BAP members like Erica Caines and Onyesonwu) had the opportunity to attend a historic press conference, where they spoke with newly appointed Permanent Representative of Cuba to the United Nations H.E. Ambassador Pedro Luis Pedroso Cuesta. The conversation was published on Hood Communist.

The June 24 joint statement on the Tigray situation in the Horn of Africa that BAP’s U.S. Out of Africa Network and BAP member organization Horn of Africa Pan-Africans for Liberation and Solidarity (HOA PALS) issued was reprinted in The Ethiopian Herald, All Africa, GhanaNews, Black Star News, Monthly Review, Global Research, Hood Communist and Black Agenda Report.

Netfa was quoted in the Final Call’s article, “U.S. Role in Africa Driven by Lust for Resources, Not Fear of Terrorism.” Netfa also discussed 104 minutes into Radio Sputnik’s “The Critical Hour” how amid U.S./European colonialism and oppression, many North African nations are turning to Russia, China and even Turkey for economic expansion. Starts at 104:20 into the show. 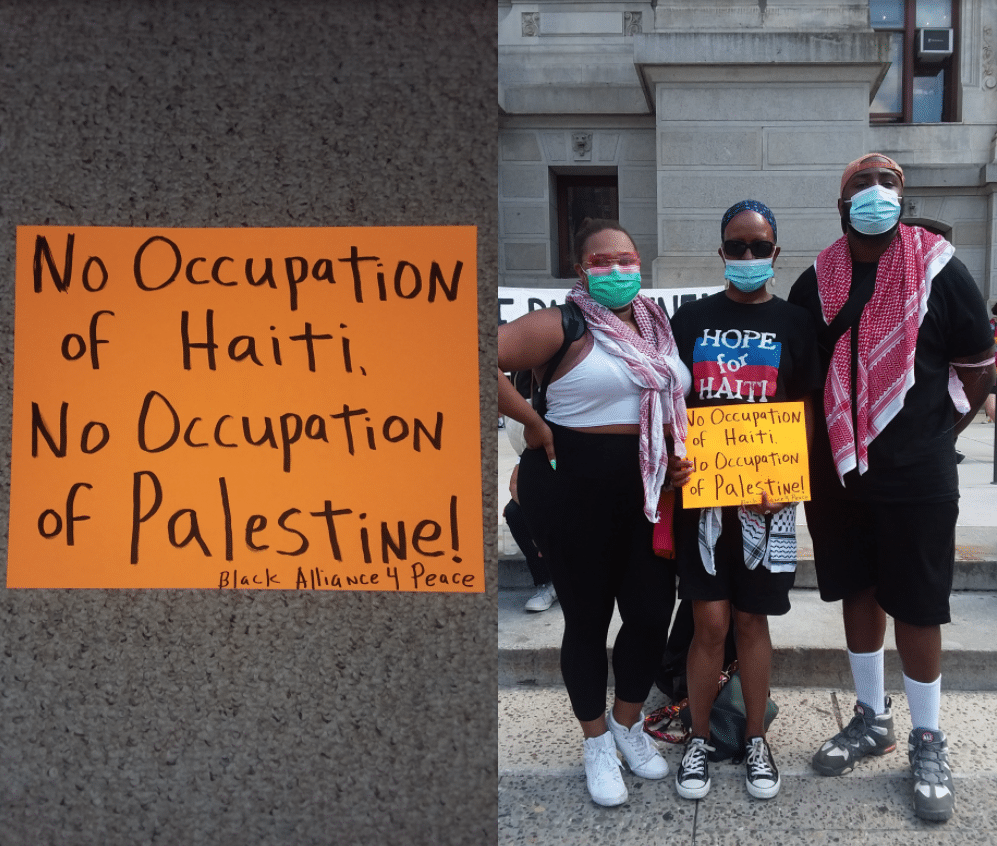 BAP member Deandra Jefferson spoke at a July 10 Philly 4 Palestine rally, which starts at the 17:57 mark. BAP member Nicholas Johnson served as a marshal during the march. Pictured below are from left to right, Deandra, BAP member Asantewaa Nkrumah-Ture and Nicholas at the rally and march, as well as a close-up of a sign (left) they held that says, “No Occupation of Haiti, No Occupation of Palestine!”

The Black Myths Podcast hosted by BAP member Too Black on Black Power Media’s YouTube channel will feature a debate on Community Control of Police on July 20.

BAP Coordinating Committee member Erica Caines and BAP-South member Salifu Mack appeared on BAP Solidarity Network member Ramiro Sabastían Funez‘s YouTube show, “Unmasking Imperialism,” to discuss right-winger Candace Owens and break down her comments about race and class in the United States as well as her role as a shill for the Zionist, evangelical and pro-war forces.

Margaret Kimberley’s column for Black Agenda Report on the myth of July 4 is titled, “The Terrible Origins of July 4th.” Margaret also discussed trauma and oppression in Black America on the Fred Hampton Leftists podcast.

July 14: PACA‘s next Assata Shakur Study Groups (ASSG) event on Community Control of the Police will be held at 7 p.m. ET. Register here.