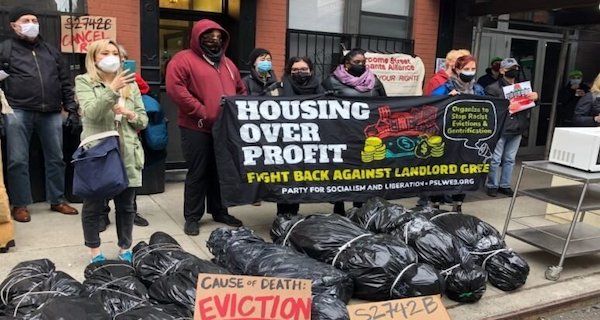 On Saturday, Biden’s half-hearted, last-minute plea for Congress to extend the federal eviction moratorium failed and the measure expired. The Democrat-controlled House of Representatives chose to go on vacation rather than pass a bill to save renters. The Center for Budget and Policy Priorities has estimated that over 11 million renters are behind on their rent. Hundreds of thousands of people could be evicted from their homes in the coming days and weeks alone, amid a deadly surge in coronavirus infections.

Earlier this summer, the right-wing majority on the Supreme Court ruled that Congress would have to act to extend the eviction moratorium and that it couldn’t be prolonged further simply by decision of the Centers for Disease Control. With a month to prepare, the Biden administration twiddled its thumbs. And Democrats in Congress were just as aware as the Biden administration that the court ruled the moratorium could not be extended without congressional action.

With just three days to spare, Biden finally officially requested last Thursday that Congress pass legislation to pause evictions. A significant number of right-wing Democrats in the House were unwilling to vote in favor of such legislation. Instead of launching what would have likely been a wildly popular public pressure campaign to get these congressmembers to fall in line, Speaker of the House Nancy Pelosi sent legislators home for a six-week vacation, during which time thousands and thousands of families will likely be thrown out into the streets. There was simply no serious effort from the Democratic Party and the federal government to extend the moratorium.

The Biden administration followed the example of the Trump administration and passed responsibility off to state and local governments. Some states have extended their moratoriums—New York, Illinois, and California being notable examples. But these states are exceptions to the rule. Less than one out of five states has extended state level eviction moratoriums.

The roughly $46 billion dollars in rental assistance approved by Congress in March and December of last year has almost totally failed to reach renters. Red tape and bureaucracy have allowed only 7% of these funds to reach the people who need it most. A large part of this is due to the poorly-advised decision by the Biden administration to let state and local governments handle the disbursement of the funds themselves. State and local governments do not have the money and personnel to create the infrastructure to give out this money. The resources of the federal government could much more effectively be put to use to do this. The Democratic Party establishment has demonstrated to the whole country their inability to offer leadership in a moment of crisis for the working class.

This stands in stark contrast to the government’s dramatic action to bail out the rich. When the COVID-19 crisis hit, the Democratic and Republican parties chose to bail out banks and corporations with trillions of dollars of loans and tax credits. Very little relief came to working-class families outside of a one-time stimulus check. Much of the stimulus money went directly to pay debt accrued during the pandemic. Even the “Paycheck Protection Program” loans for small businesses, designed to help struggling small businesses pay their workers, were gobbled up by wealthy banks and corporations.

As the capitalist class and their government fails to act, it is up to the working class to take matters into our own hands. Since the pandemic began, a movement demanding the cancelation of rents and mortgage payments has been gaining strength—this demand is more important now than ever. Representative Cori Bush, who herself has experienced homelessness, began a sit-in protest outside Congress that has been joined by many supporters of housing rights. Activists across the country have been organizing eviction response networks and tenants unions to mobilize people to directly block evictions and help mitigate some of the worst effects on families. An all-out struggle by the working class is the only hope to prevent possibly the worst eviction crisis in the country’s history.