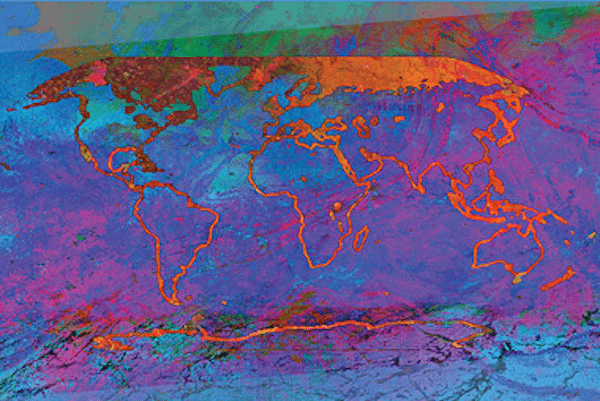 The Intergovernmental Panel on Climate Change (IPCC) Working Group 1 has presented its Physical Basis Report as a contribution to the Sixth Assessment Report on climate change, due in early 2022. The report and its summary are written in the precise style and vocabulary of scientific publications that make ‘objective’ statements. However, never before has a report by global warming experts given such an impression of the anguish caused by the analysis of the facts in the light of the inescapable laws of physics.

The anguish stems first of all from the context: the terrible floods and fires that are spreading desolation, death and fear in the four corners of the planet are the very things that the IPCC has been warning against for more than thirty years, and that governments have done little or nothing about. It also stems from the enormity of the fact, mentioned in the report, that even if COP26 (in Glasgow in November) decides to implement the most radical of the stabilisation scenarios studied by climate scientists, i.e. the one that ensures the most rapid reduction in CO2 emissions and cancels net global emissions by 2060 at the latest (while also reducing emissions of other greenhouse gases), humanity would still face terrible prospects.

… in the best case scenario?

This report forces us to face reality: we are literally on the brink of the abyss. All the more so because, let us repeat and insist:

1) the projections for the sea level rise do not include the phenomena of the disintegration of the ice caps, which are non-linear and therefore cannot be modelled, and which have the potential to very quickly turn the catastrophe into a cataclysm;

2) all of the above is what the IPCC believes will happen if the world’s governments decide to implement the most radical of the emission reduction scenarios studied by scientists, the scenario aimed at not going (too far) above 1.5°C.

To detail the impacts of the other scenarios would make this text unnecessarily long. Let’s just give an indication, concerning sea levels: in the business-as-usual scenario, a rise of 2 metres in 2100 and 5 metres in 2150 is “not excluded”. And in the long term, over two thousand years, for a warming of 5°C, the seas would inevitably and irreversibly rise (on the human timescale) by… 19 to 22 metres!

Let’s recap. Implementing the most radical scenario proposed to them is not what governments are doing. Their climate plans (the “nationally determined contributions”) are currently leading us towards a warming of 3.5°C. With less than one hundred days to go until COP26, only a few countries have “upped their ambitions” … but not nearly to the necessary levels of emission reductions. For example, the EU, the “climate champion”, has set a target of 55% reduction by 2030, when 65% is needed.

A simple question of maths, and its political conclusion

Greta Thunberg once said that “The climate and ecological crisis simply cannot be solved under the current political and economic systems. This is not an opinion, it is simply a matter of mathematics.” She is absolutely right. You only have to look at the figures to see that:

3°) according to the IPCC’s 1.5°C special report, achieving zero net CO2 emissions in 2050 requires reducing global emissions by 59% before 2030 (65% in developed capitalist countries, given their historical responsibility)

4°) 80% of these emissions are due to the burning of fossil fuels which, despite the political and media hype about the breakthrough of renewables, in 2019 still accounted for… 84% (!) of humanity’s energy needs;

5°) Fossil infrastructures (mines, pipelines, refineries, gas terminals, power stations, etc.)–the construction of which is not slowing down, or hardly at all–are major facilities in which capital is invested for some 40 years. Their ultra-centralised network cannot be adapted to renewables (they require another, decentralised energy system): it must be destroyed before capitalists can recoup their investments, and the reserves of coal, oil and natural gas must remain underground.

Therefore, knowing that three billion human beings lack the essentials and that the richest 10% of the population emit more than 50% of global CO2, the conclusion is unavoidable: changing the energy system to stay below 1.5°C while devoting more energy to satisfying the legitimate rights of the poor is strictly incompatible with the continuation of capitalist accumulation that generates ecological destruction and growing social inequalities.

The catastrophe can only be stopped in a manner worthy of our humanity by a double movement consisting of reducing global production and radically reorienting it to serve real human needs, those of the majority, democratically determined. This double movement necessarily involves the suppression of useless or harmful production and the expropriation of capitalist monopolies–first and foremost in energy, finance and agribusiness. It also requires a drastic reduction in the consumption extravagances of the rich. In other words, the alternative is dramatically simple: either humanity will liquidate capitalism, or capitalism will liquidate millions of innocent people to continue its barbaric course on a maimed, and perhaps unliveable, planet.

It goes without saying that the masters of the world have no desire to liquidate capitalism… What will they do then? Let’s leave aside the climate deniers like Trump, those followers of Malthus who are betting on a fossil fuel neo-fascism. a plunge into planetary barbarism on the backs of the poor. Let’s also leave aside the Musks and the Bezos, those obscene billionaires who dream of leaving the ship Earth made unliveable by their greedy capitalist parasites. Let’s focus on the other, more cunning ones, those–the Macrons, Biden, Von der Leyen, Johnson, Xi Jiping…–who will fight like brigands for the Glasgow agreement to give them an advantage over their competitors, but will stick together in front of the media to try to persuade us that “everything is under control”.

To escape the above alternative, what do these gentlemen propose? Firstly, of course, making consumers feel guilty and asking them to “change their behaviour”, on pain of sanctions. Then, a set of tricks, some of which are downright crude (the failure to take into account emissions from international air and sea transport, for example), and others which are more subtle–but no more effective (for example, the assertion that planting trees–in the global South–would make it possible to absorb enough carbon to sustainably compensate for the fossil CO2 emissions of the North). But beyond these tricks, all these political managers of capital now believe (or pretend to believe) in a silver bulletincreasing the share of “low-carbon technologies” (code name for nuclear power, especially “micro-power plants”) and, above all, deploying so-called “negative-emission technologies” (NETs–or CDRs, for Carbon Dioxide Removal), which are supposed to cool down the climate by removing huge quantities of CO2from the atmosphere to be stored underground. This is the so-called “temporary overshoot of the danger threshold” of 1.5°C.

There is no need to dwell on nuclear power after Fukushima. As for “negative emission technologies”, most of them are only at the prototype or demonstration stage, and their social and ecological effects promise to be terrifying (more on this later). Nevertheless, we are led to believe that they will save the productivist/consumerist system and that the free market will take care of deploying them. In truth, this science fiction scenario is not primarily about saving the planet: it is primarily about saving the sacred cow of capitalist growth and protecting the profits of those most responsible for the mess: the oil, coal, gas and agribusiness multinationals.

The IPCC between science and ideology

And what does the IPCC think of this madness? Adaptation and mitigation strategies are not part of Working Group 1’s remit. However, it does make scientific considerations that should be taken into account by the other Working Groups. On NETs, it is careful not to rush to the brink. The Summary for Policy Makers states:

Anthropogenic CO2 removal (CDR) has the potential to remove CO2 from the atmosphere and durably store it in reservoirs (high confidence).” The text goes on to say that “CDR aims to compensate for residual emissions to reach net zero CO2 or net zero GHG emissions or, if implemented at a scale where anthropogenic removals exceed anthropogenic emissions, to lower surface temperature. (D1.5, p39)

Clearly, the summary endorses the idea that negative emission technologies could not only be deployed to capture “residual emissions” from sectors where decarbonisation is technically difficult (e.g. aviation): they could also be implemented on a massive scale, to compensate for the fact that global capitalism, for reasons that are not “technical” but profit-driven, refuses to give up fossil fuels. The text goes on to extol the benefits of this massive deployment as a means of achieving net negative emissions in the second half of the century:

The summary makes one caveat, but it is cryptic:

CDR technologies may have potentially widespread effects on biogeochemical cycles and climate, which may either weaken or enhance the potential of these methods to remove CO2 and reduce warming, and may also influence water availability and quality, food production and biodiversity (high confidence).

Clearly, it is not clear that NETs are all that effective, as some “effects” could “weaken (their) potential to remove CO2”. The last part of this sentence refers to social and ecological impacts: bioenergy with carbon capture and sequestration (BECCS), the most mature NETs today) could only significantly reduce atmospheric CO2 concentration if an area equal to more than a quarter of today’s permanently cultivated land was used to produce biomass–at the expense of water supplies, biodiversity, and/or feeding the world’s population.1

Thus, on the one hand, the IPCC Working Group 1 bases itself on the physical laws of the climate system to tell us that we are on the brink of the abyss, on the verge of irreversibly tipping over into an unimaginable cataclysm; on the other hand, it objectifies and trivializes the political-technological headlong rush by which capitalism is once again trying to postpone the irreconcilable antagonism between its logic of unlimited profit accumulation and the limits of the planet. “Never before has an IPCC report given off such a strong sense of the anguish caused by the scientific analysis of the facts in the light of the inescapable laws of physics,” we wrote at the beginning of this article. Never before has such a report illustrated so clearly that a scientific analysis that considers nature as a mechanism and the laws of profit as laws of physics is not really scientific but scientistic, i.e. at least partly ideological.

The IPCC WG1 report should therefore be read with the understanding that it is both the best and the worst of things. The best, because it provides a rigorous diagnosis from which to draw excellent arguments for indicting those in power and their political representatives. The worst, because it spreads both fear and powerlessness… from which the powerful benefit from even though the diagnosis accuses them! Its scientistic ideology drowns the critical spirit in the flood of “data”.

It thus diverts attention from the systemic causes, with two consequences:

1) attention is focused on ‘behavioural change’ and other individual actions–full of good will but pathetically insufficient;

2) instead of helping to bridge the gap between ecological and social awareness, scientism maintains it.

Ecologising the social and socialising ecology is the only strategy that can stop the catastrophe and revive the hope of a better life. A life of caring for people and ecosystems, now and in the long term. A simple, joyful and meaningful life. A life that the IPCC scenarios never model, where the production of use values for the satisfaction of real needs, democratically determined in respect of nature, replaces the production of goods for the profit of a minority. This ecosocialist alternative scenario will not be modeled by the IPCC. It is rational and feasible, but can only grow from the solidarity and the self-organised struggles of the exploited and oppressed.