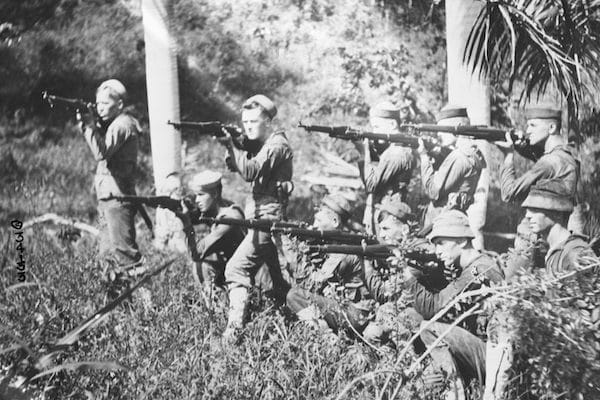 Circa 1915: American naval officers and marines from the USS Washington come ashore for the capture of Port-au-Prince in Haiti. (Photograph by Getty Images)

On the night of 14 August 1791, enslaved Africans gathered in the Bois Caïman forest and planned the revolt that would begin the Haitian Revolution. Last week, on the 230th anniversary of this meeting, Haiti was hit by an earthquake that has upturned the lives of more than a million people. The count of the lives lost stood at 1 941 at the time of writing, with around 10 000 more injured. The following day, the Taliban took the city of Kabul and thereby control of Afghanistan.

In these two days, the question of Euro-American imperialism was brought into sharp and dramatic focus. It has, beginning with the arrival of Christopher Columbus in the Bahamas on 12 October 1492, been the most powerful force shaping the modern world. More than 500 years later, we continue to inhabit the historical epoch inaugurated by Columbus. The rise of China is beginning to bring this period of unrivalled Euro-American domination of the planet to an end, but it is far from over.

Revolution and containment in Haiti

After 1492 came genocide, mass enslavement and colonialism, first legitimated in the name of religion. Then, from the latter part of the 17th century, came the idea of race. The revolution in Haiti defeated the three great European powers of the day–the French, the Spanish and the English–and after more than 12 years of war it declared the first Black republic in the modern world on 1 January 1804.

In 1805, the French foreign minister wrote to then American secretary of state James Madison, declaring: “The existence of a Negro people in arms, occupying a country it has soiled by the most criminal acts is a horrible spectacle for all white nations.” France and the United States moved swiftly to isolate the new republic, and France sent its warships to Haiti in 1825 to demand that it accept and pay a debt of 150 million francs for France’s loss of slaves and its colony. The debt had to be financed by incurring further debt at extortionate rates, and by the end of the 19th century it consumed around 80% of the national budget. It was only fully paid off in 1947.

In 1915, the U.S., which had always seen the independent Black republic as a serious threat, sent its army to occupy Haiti. It moved swiftly to steal the country’s gold reserve and take it to the National City Bank in New York. A brutal and intensely racist regime was implemented, and a revolt that began in 1918 was met with unrestrained American savagery and crushed by 1922. The U.S. ended its occupation in 1934, but its exit was designed to sustain control via proxy, including the army that it had established.

In 1957, Francois Duvalier was elected to power in a rigged election. He ran an extraordinarily brutal dictatorship, a kleptocracy backed at every turn by the US. Democrats and leftists were viciously persecuted. Up to 50 000 people were murdered under the Duvalier dictatorship, which his son continued when, in 1971, he died a fabulously wealthy man in what had become a country of extremely impoverished people.

Resistance to the dictatorship was organised through popular formations, often based in shantytowns and animated by a commitment to the affirmation of dignity. The statement tout moun se moun, every person is a person, which has obvious African roots, became central to the logic of organisation and resistance. As so often happens, the movement crystallised around a charismatic figure, Jean-Bertrand Aristide, a Catholic priest committed to liberation theology. He was elected as president in February 1990.

The first coup attempt, immediately after the election, was seen off by huge mobilisation in the streets. But in September the following year, Aristide was removed in a coup covertly supported by the U.S., following which 4 000 to 5 000 of Aristide’s supporters were murdered. 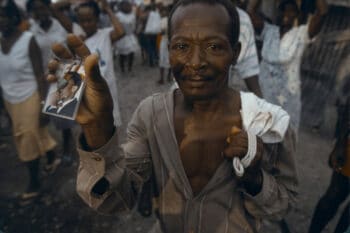 24 September 1994: Haitians march in pro-democracy and pro-Aristide demonstrations after the arrival of United States troops in Port-au-Prince. (Photograph by Andrew Lichtenstein/ Corbis via Getty Images)

After more than a quarter of a million people took to the streets in the U.S. in support of democracy in Haiti, Bill Clinton allowed Aristide to return in 1994 after he agreed to allow U.S. control over the police force, implement a structural adjustment programme and the deployment of 20 000 U.S. soldiers. The U.S. agreed to pull its soldiers out of the country in 1996, with Clinton’s deputy secretary of state saying: “Even after our exit in February 1996, we will remain in charge by means of USAID and the private sector.”

Aristide was elected for a second term in 2000, with huge popular support, and on 28 February, two months after the bicentenary of the Haitian Revolution was commemorated, abducted from his home at gunpoint by U.S. soldiers and flown out of the country. Since then, the U.S. and other Euro-American powers, including Canada and France, have not allowed the Haitian people the right to chart their own course into the future.

The devastation of the 2010 earthquake was largely a result of the deliberate impoverishment of the country, a process going back to the revolution and taken over by the U.S. in 1915. It was exploited to effectively implement rule by non-governmental organisations. The earthquake last weekend hit so hard for the same reason.

The Haitian experience of U.S. imperialism is far from unique. Since 1945, the U.S. has bombed at least 32 countries, invaded at least 12 and attempted to overthrow or support the overthrow of more than 45 governments, including the 2019 coup in Bolivia. Between 1946 and 2000, the U.S. sought to intervene in at least 81 elections around the world. A report prepared for members of the U.S. Congress notes that between 1946 and 2020 the U.S. deployed its armed forces abroad “for other than normal peacetime purposes” in more than 70 countries.

The number of lives lost to violence perpetrated and supported by the U.S. is staggering. Estimates of deaths resulting from the war in Vietnam range from around 1.5 million to 3.5 million. Around a million people are said to have been killed in Indonesia in violence backed by the U.S. Central Intelligence Agency (CIA) against the Left in 1965 and 1966, although there are estimates that range as high as three million. Estimates of deaths consequent to the war in Iraq are highly disputed and reach past the one million mark. A 2006 study published in The Lancet journal concludes that 654 965 Iraqi lives were lost between March 2003 and June 2006 as a result of the U.S. invasion. Estimates of the number of people displaced by the war are between 3.5 million and five million. And the devastation caused by the destruction of Iraq paved the way for new wars, and the horrors of the Islamic State.

There are plenty of states that repress their own people in horrendous ways. But there is, in planetary terms, no more dangerous, anti-democratic and murderous a state than the U.S.

If a government from anywhere outside of the Euro-American world engaged in even a small fraction of this sort of conduct it would be vilified in the most extreme terms, isolated and every effort made to overthrow it. The sole reason why figures such as George W Bush and Tony Blair are not received as monstrous war criminals is because they represent countries that are assumed by many in major circuits of influence, including much liberal opinion in South Africa, to have a natural right to rule the world, and to decide who lives and who dies.

Conservative estimates place the cost of the 20-year U.S. occupation of Afghanistan at close to a quarter of a million deaths and more than $2 trillion, $6.5 trillion when the interest on the loans taken to finance the war is repaid. This is more than enough to end global hunger and, by some estimates, climate change. Afghanistan has been laid to waste and will now have to endure the agonies of rule by the Taliban and what it will do to women and girls, and religious and ethnic minorities.

This grim situation should not be misused to mask the nature of U.S. power. The sense that the U.S. has some sort of sacred mission to free people with bombs, guns and coups has been held by everyone who has taken high office in that country and is shared by large numbers of U.S. citizens. Just as European colonisers told themselves that they were bringing the word of God to heathens, or civilisation to the uncivilised, the U.S. bombs people in the name of freedom, democracy and, since the invasions of Afghanistan in 2001 and Iraq in 2003, a perverse form of feminism blinded by whiteness and exemplified by Hillary Clinton.

This is hypocrisy of the highest order. The U.S. has backed all kinds of repressive regimes, including the apartheid state. It supports Saudi Arabia, has backed Al Qaeda in the Yemen and, in the 1980s, backed the deeply conservative Islamists in Afghanistan against the secular state allied to the Soviet Union. It has supported deeply reactionary Islamist projects against the Left and secular nationalism in countries such as Indonesia, Pakistan and Egypt. 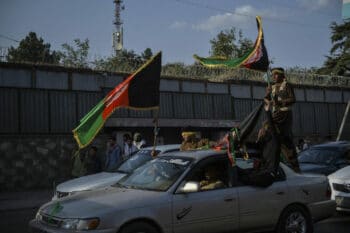 19 August 2021: Residents mark the 102nd Independence Day of Afghanistan in Kabul, days after the Taliban’s military takeover of the country. (Photograph by Hoshang Hashimi/ AFP)

As Mahmood Mamdani has observed, it was the Reagan administration that “rescued right-wing Islamism” from “the historical cul-de-sac” in which it was mired in the mid-1980s. The CIA, primarily working with Pakistani intelligence, provided money, weapons, intelligence and training to the mujahideen–the Islamist fighters in Afghanistan–with support from intelligence services in countries such as Israel, Saudi Arabia and Britain. Mamdani notes that more than 100 000 foreign militants were recruited and trained to support this project, including Osama bin Laden, who, by 1986, was working directly with the CIA. By the following year, clandestine U.S. support to the mujahideen was estimated at $660 million. The war was also supported by the heroin trade, which, Mamdani writes, was “organised and centralised under CIA control”.

The U.S. invested in a deeply misogynistic project. Gulbuddin Hekmatyar, who was allocated vast resources by the CIA during the war–up to $2 billion–and huge amounts of arms, ordered his followers in the early 1970s to throw acid in the faces of women students who refused to wear veils.

The Taliban has its roots in this U.S.-backed milieu, and in particular the madrassas that were supported in Pakistan. The chickens, as Malcom X famously said, have come home to roost.

It is difficult to overstate the urgency of the need to roll back and eventually defeat American imperialism. But if we are to avoid exchanging one form of oppression for another, imperialism needs to be confronted, driven back and eventually defeated by progressive forces. And, as the example of Haiti shows, these cannot be isolated. Progressive internationalism must be rebuilt.