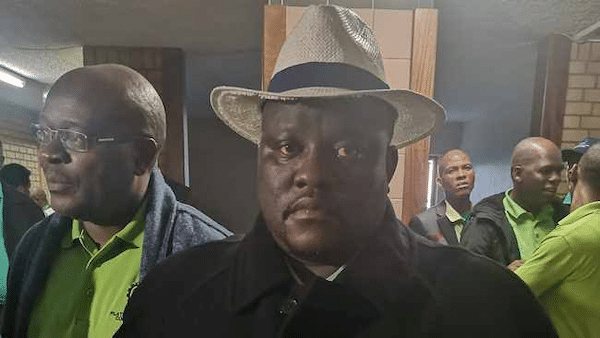 Four days after the public assassination of Malibongwe Mdazo, an organizer of the National Union of Metalworkers of South Africa (NUMSA), the South African police are yet to make an arrest. Mdazo had led the strike last month by 7,000 workers in Rustenburg city’s five mining companies contracted to Impala Platinum Holdings Limited (Implats), the second largest platinum producer in the world.

Amidst the ongoing labor dispute with these companies, he was gunned down outside the Commission for Conciliation, Mediation and Arbitration (CCMA) on August 19. NUMSA had taken the five companies to this labor dispute resolution body because of their refusal to recognize NUMSA, which claims to have a majority membership.

These contractor companies, NUMSA alleges, are instead seeking to reach a three-year agreement with the Association of Mineworkers and Construction Union (AMCU) and bind to it the majority of the workers even though they are allegedly not represented by AMCU.

Before the shooting on August 19, the CCMA was in the process of verifying NUMSA’s membership forms to establish whether the union had a sufficient number of members to warrant recognition by one of the five companies, Newrak.

This session was adjourned at 12:10 p.m with the decision to extend the process and involve AMCU. Following a 20 minutes-break, at 12:30 p.m, the next session at the CCMA was scheduled in connection with the same dispute with another of the five companies, Triple M. The armed attack happened right outside the CCMA office during this break.

According to a source, who was present with Mdazo and managed to duck for cover in time to save his life, two hitmen, with their faces covered in balaclavas, snuck up behind Mdazo and other NUMSA members who were singing and dancing at the CCMA’s doorstep and fired more than 10 bullets.

Mdazo, who fell to the ground on being hit, died after being shot with more bullets. Another NUMSA member and a bystander who suffered severe bullet injuries were hospitalized. The next conciliation session between NUMSA and Triple M had to be postponed after this attack.

After the state-owned South Africa Broadcasting Corporation (SABC) reported that the firing began amidst a clash between NUMSA and AMCU, multiple local media organizations repeated this claim.

However, the source, a NUMSA member, refuted this and insisted that AMCU members were not present at the site.

I have made a call to my Rustenburg office to check who was at CCMA; there was nobody. I have demanded a report from my local secretary and verified the locations of all regional AMCU leaders; none were near the CCMA. It was some CCMA official who made this claim before the press, which is being repeated by media organizations. There is a tendency to paint the picture that unions are always fighting with each other in South Africa. But that’s not true.

Condemning the killing in a statement on August 21, Mpahlele said,

As AMCU, we pass our condolences to the victim’s family, friends and comrades.. We call on the authorities to act swiftly and to leave no stone unturned to bring the perpetrators to justice. All progressive forces must stand united in condemning these dastardly acts of violence.

Nevertheless, the relation between the two unions has been souring, especially after about 7,000 NUMSA members, mostly unionized by Mdazo, struck work in five Implats-contracted mining companies in Rustenburg city in North West province on June 20. These companies include Platchro, Reagetswe, and LPK Isivuno, along with Triple M and Newrak.

Workers with NUMSA are demanding salary adjustment, living out allowances, and medical aid. The companies refused to engage with the striking workers on the grounds that NUMSA is not a recognized union. However, the workers continued strike action, complaining that AMCU, which is the union recognized by these companies, does not represent them. These companies dismissed over 4,000 workers by the beginning of July.

“The strike ended after the agreement was reached with contractors on the 13th of July. We negotiated for all employees to be reinstated. The only exception was the members of (NUMSA’s) interim committee who were dismissed. They could only be reinstated following a process of private arbitration,” said NUMSA’s national spokesperson, Phakamile Hlubi Majola.

As a part of this agreement to end the strike, the companies had also consented to participate in the verification exercise under the aegis of the CCMA to give NUMSA the chance to prove the majority it claims. However, when the NUMSA members returned to work at Reagetswe after ending the strike action, they were allegedly instructed by the Human Resource department to sign AMCU’s membership forms.

They were also asked to sign a pledge conceding to the company the right to terminate their employment contracts “should they engage in unauthorized meetings or embark on any illegal strike action or work stoppages in the future,” according to the letter submitted on July 21 by NUMSA’s attorney, Reynaud Daniels. This letter was addressed to the Managing Directors of Reagetswe Trading, Triple M Mining, Newrak Mining, and AMCU’s general secretary, Mphahlele.

[u]pon arriving for their induction, NUMSA members [were].. first addressed by two AMCU shop stewards, Zakhele Matiso and Joseph Ngxeke.. who demanded that members first sign an AMCU membership form or else they would not be permitted to work. This demand was made in the presence of management, who did not intervene to stop the shop stewards.

Daniels also added in the letter that “[o]ne NUMSA member, Khuselo Sigwabe who reported for duty on Saturday 17 July was assaulted by Matiso and Ngxeke. They threatened to kill him if he did not sign an AMCU membership form.”

At Newrak, he complained, “NUMSA members were required to sign stop order forms in favor of AMCU and a ballot sheet indicating that they were members of AMCU.” Under the threat of losing their livelihood, he said, some workers in these three companies signed these forms.

Daniels complained that this conduct of the contractor companies is illegal, in violation of the agreement which ended the strike, and “calculated to undermine our client in the agreed verification processes.”

Then, on August 19, when the first conciliation session between NUMSA and Newrak began, Mdazo, who had played a leading role in organizing workers under NUMSA, was gunned down at the entrance of the CCMA.

When asked for a response to the allegations made by Daniels in this letter, Mphahlele refused to comment because the matter is sub-judice. He, however, referred Peoples Dispatch to an affidavit he had submitted to the Labor Court in Johannesburg on July 27, in which he claimed:

I deny that employees of Reagetswe, Triple M, and Newrak have been forced or pressured into signing membership or stop order forms or ballot sheets indicating that they were members of AMCU. All employees signed membership forms freely and voluntarily.

He had further claimed that “AMCU, as the majority union at Impala and its contractors, is not prohibited from recruiting members upon their return to work. In fact, it is standard practice for employees returning to work, as part of the induction process, to be directed to unions’ offices for recruitment purposes. Whether or not employees returning to work ultimately join a union is their choice which they exercise freely and voluntarily.”

NUMSA’s general secretary, Irvin Jim, had said in a statement,

NUMSA is very clear that the murder of comrade Mdazo is as a result of him recruiting workers at Implats, and we believe his work is the reason his life was taken.

We are calling on the police to leave no stone unturned in ensuring that these criminals.. are arrested before they continue to kill in a targeted fashion all those workers who have taken it upon themselves to voluntarily join NUMSA as the union of their choice.

“Once again, we call on activists to unite towards condemning violence of any shape and form”, Mphahlele maintains.

Incidents like this one undermines the goal of the working class to ensure social justice for our members and to make a difference in their lives.

“It is crucial that the police must put an investigation team together that ensures that such criminals are taken out of society as we cannot afford any more loss of life,” he added, warning that if the police fail to act,

they will leave us with no choice but to call on our members to defend themselves.