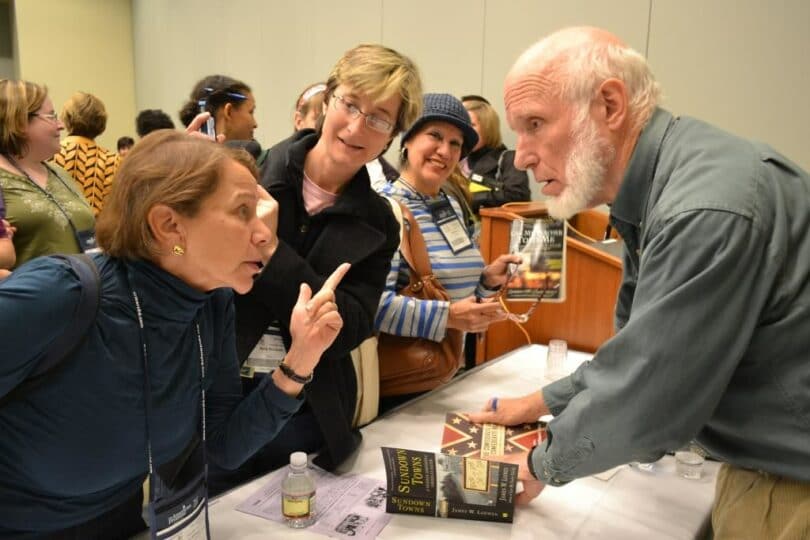 James W. Loewen (right) speaking to a standing room only audience at the 2011 National Council for the Social Studies Conference in a session hosted by the Zinn Education Project. Image credit: Teaching for Change, Flickr.

This essay is revised from James W. Loewen’s analysis of American history as presented for high school students in Lies My Teacher Told Me (New York: The New Press, 1995). This version appeared earlier in the Radical Historians Newsletter. (Note: minor updates have been made to the original introduction of this article as it first appeared in the November 1992 issue of Monthly Review, vol. 44, no. 6: 12-25. —Eds.)

Over the last few years, I have asked hundreds of college students, “When was the country we now know as the United States first settled?”

That is a generous way of putting the question. Surely “we now know as” implies that the original settlement happened before the United States. I had hoped that students would suggest 30,000 BC, or some other pre-Columbian date. They did not. Their consensus answer was “1620.”

Part of the problem is the word “settle.” “Settlers” were white. Indians did not settle. Nor are students the only people misled by “settle.” One recent Thanksgiving weekend, I listened as a guide at the Statue of Liberty told about European immigrants “populating a wild East Coast.” As we shall see, however, if Indians had not already settled New England, Europeans would have had a much tougher job of it.…

Read the full article at monthlyreview.org.

James W. Loewen is professor emeritus of sociology at the University of Vermont-Burlington. He is author of the best-selling book, Lies My Teacher Told Me: Everything Your High School History Textbook Got Wrong (now widely used in classrooms across the country), as well as Lies Across America: What Our Historic Sites Get Wrong. His works can be found at his personal website.