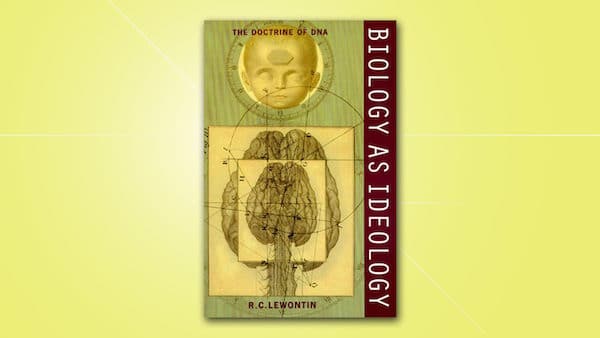 This first U.S. edition of Biology as Ideology by Richard Lewontin is a reprint of the 1990 Massey Lectures, which were broadcast on the Canadian Broadcasting Company, and an essay titled The Dream of the Human Genome written for The New York Review of Books (May 28, 1992). The lectures and essay were written in response to the Human Genome Project (HGP) and aimed to explain why the “doctrine” of DNA is an ideology masquerading under biological research agendas. Much like any other successful work on ideology, Lewontin’s book exposes hidden lenses that obscure our vision of the world.

In it, Lewontin shows how economic and social forces shape our conceptualization of biology and how, in turn, biology shapes and further perpetuates capitalist hegemony. The increased atomization of society and associated political economy of capitalism justifies the logic of reductionism. Just as individual economic actors constitute society, so do individual biological parts determine an organism. Such ideological commitment facilitated the construction of DNA as a “master molecule,” “the cause” of organismal traits. This led to the idea of genetic (biological) determinism, with which certain groups could use to justify their privileged status. According to Lewontin, in a modern democratic society, where artificial barriers between social groups (in theory) no longer exist, biological differences could be used to justify inequality. Drawing an analogy from religion, he postulated that science, especially biology, is a modern “institution of social legitimation,” an ideological force that creates a certain reality for its followers. He goes further in elucidating the influence of capitalist ideology on modern biology. A vision of evolution that applies competitive logic of capitalism to workings of nature—or a more recent theory of sociobiology that extends the status quo into natural order—is nothing more than a lack of imagination, a blueprint re-casted to accommodate biological facts.

Although the primary audience for the book is the general public, I wish more scientists read it. The big picture that Lewontin draws is rare, valuable, and still relevant. Our knowledge of the human genome has advanced since the book was written, but it is still very pertinent if not prophetic about the overreaching promises of the HGP to crack a “code of Life.” Unfortunately, general disillusionment with DNA in post-HGP times didn’t result in re-evaluation of the program that Lewontin tried to expose.1 Aided with technologies that the HGP brought us, biology has switched to RNA as the “next favorite molecule” and recent mRNA vaccines are good examples of it. Although one step away from “vulgar determinism,”2 but still within the nucleic acid paradigm, current biology is incapable of self-reflection, exactly because a big picture could no longer be seen. Perhaps, as Lewontin suggests, philosophical revision of the “cause and effect” relationship is necessary. Common confusion between an agent and a cause has been exposed in the ongoing global pandemic that has shown the incompleteness of molecular biological explanations. Is a virus an agent or a cause of the disproportionate loss of lives in underprivileged communities, in groups with underlying health conditions? Biomedical models of disease place the blame on individuals, on DNA, or on viruses. However, as Lewontin urges, we must recognize it as one cause among others and put it into a context from which it derives its meaning.

A vision of evolution that applies competitive logic of capitalism to workings of nature . . . is nothing more than a lack of imagination . . .

It is worth situating the book in early 1990s, with its coverage of the debate over the heritability of I.Q. and its review of literature related to the HGP. The creation of a discourse around the topic is a part of ideology, as something constructed by representatives of the elite. It is worth noting that for Lewontin, biology as an ideology is not just a Machiavellian plan by establishment, but rather a complex web of financial, political and personal interests of many parties involved.

The discussion on a concept of “environment” could be read differently now than it did thirty years ago. In a dialectical fashion, the organism creates the environment, as the environment creates the organism, irrespective of organismal type and scale. This realization renders some discussions on resurfaced notions of the Anthropocene futile, such as those that disregard other species as actors and ascribe the modern epoch as its start date.3 However, the author does acknowledge that minimizing our damaging impact on the environment is paramount for our survival.

Overall, ideas in this book are the continuation of previous work by Lewontin on a dialectical view on biology, genes, and environment. Lewontin’s commitment to revealing problems of agriculture—not just from the perspective of “pure” biology, but from political and economic motivations of seed-producing corporations—is particularly telling.4 He believed that the ideological traps of biological dogmas “prevent a rich understanding of nature and prevent us from solving the problems to which science is supposed to apply itself.”

I am deeply saddened that Richard Lewontin is no longer with us. My hope, however, is that his example will continue to inspire generations of scientists to commit to social action and continue his work. – K. Zhumadilova