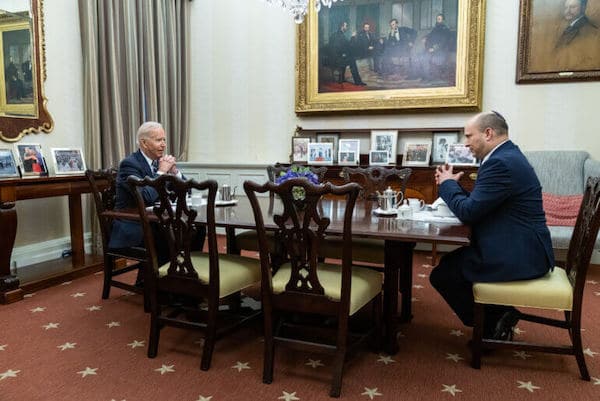 As we reflect on the Afghan withdrawal, I remember well the ideological thrill experienced by Israel supporters in the sadness and shock of 9/11. Now you know what it is like to live in Israel. The U.S. and Israel are in the same boat. Our tough neighborhood has come to your shores. Let us advise you how to deal with radical Islamist terror.

In the years that followed, the Israeli mindset and model were adopted by American policymakers. We occupied two Muslim countries and set about to reform their societies and governance. We dedicated ourselves to fighting the terrorists that hated us for who we are, a democracy. Yes, I know there were some Good Old American reasons to undertake these militant imperial activities; but the role of Israel and its lobby were significant. Netanyahu and AIPAC and the leading thinktanks urged the U.S. to go into Iraq. The neoconservatives who populated the Bush administration and had Rumsfeld’s ear had a near-religious faith in the use of American force (in a world of one superpower) to transform the Middle East.

From the start the causes of terrorism were never thoughtfully considered by our media. Only leftwingers and realists discussed Robert Pape’s exhaustive research in “Dying to Win: The Strategic Logic of Suicide Terrorism,” showing that many suicide terrorists through history were seeking to rid their lands of occupiers.

Alongside that blindness was the failure by the media and the government’s 9/11 Commission to consider a primary motivation of the 9/11 attackers: hatred of America’s role in oppressing Palestinians. That motivation got a few uncomfortable lines in the massive 9/11 report. But because Israel support is actually an article of faith in Washington– “unwavering commitment”, in Biden’s words; we support Israel even “if the Capitol crumbled to the ground,” in Pelosi’s words– such support must never be made to seem problematic. So the media and politicians distort the facts.

Just as the media and political establishment today ignore the fact that the leading human rights groups have labeled Israel an apartheid state.

Now the United States has withdrawn from Afghanistan amid scenes reminiscent of France leaving Algeria or the U.S. leaving Vietnam, and Afghanistan is for the Afghans.

Palestine must never be for the Palestinians. And that is the shock.

You could see the panic in Prime Minister Naftali Bennett’s meeting with Joe Biden last week. Bennett gave a long/bush-league/biblical lecture to the president. He spoke with evident angst about all the terror groups that surround Israel, from Hamas to Islamic Jihad to Hezbollah. He urged the U.S. to stay in Syria. He described Iran as a terror state outside civilized parameters and said Israel will continue to take it on– presumably by continuing to murder Iranian scientists.

It was the same old war on terror, being sold to Americans who polls show overwhelmingly want an end to the Afghanistan war. And the Israel lobby exulted over the summit meeting, saying it shows that the bipartisan consensus for Israel that Trump wrecked has been restored. A rightwing PM became “close friends” with a Democratic president, who all but endorsed the use of force against Iran.

Being idealistic, I say the good times at the White House can’t last. The paradigm has shifted on the war on terror, and Israel as an apartheid state.

Israel will continue to experience terror attacks, and will deliver terror ten-fold back to Palestinians– so long as it constitutes itself as a majority “Jewish” state that grants higher rights to Jews and forces rights-less Palestinian into cantons. No one in the Israeli government has challenged these concepts of governance. Israel is in national mourning today for a sniper who was shot at the wall of the Palestinian ghetto of Gaza by a Palestinian who is confined to that space. The Israel lobby tells Americans that a “Hamas terrorist” killed a good soldier.

When liberal Zionists say the occupation is unsustainable, they leave out the inevitable sequel: Palestinians who want a better future are always going to resist Israeli rule, by whatever means.

That’s why Israel is a security state surrounded by terrorists. It’s not a democracy.

This was all foreseen. Hannah Arendt said during the Nakba in 1948 that Israel was doomed to “degenerate” into a Spartan warrior state so long as it ignored the desires of its neighbors. In the same year State Department advisers warned the White House that helping to implant a Jewish state in Palestine would result in decades of unrest. Both predictions have come to pass. Nobel Peace Prize-winner Obama bombed 7 Muslim-majority nations.

The Israel lobby has worked tirelessly to overcome these brutal realities by projecting the Israeli experience and saying the Israeli condition is the American condition, and everything bad about its neighborhood also threatens America. So Israel is our great ally. The lobby has repackaged that ally again and again through the Cold War and the war on terror and on Iran too. “Both of us… are a lighthouse in a very, very stormy world,” Bennett told Biden.

The Afghanistan withdrawal reminds us that the U.S. and the so-called Jewish state have very different interests in the Middle East. If only we could discuss it.