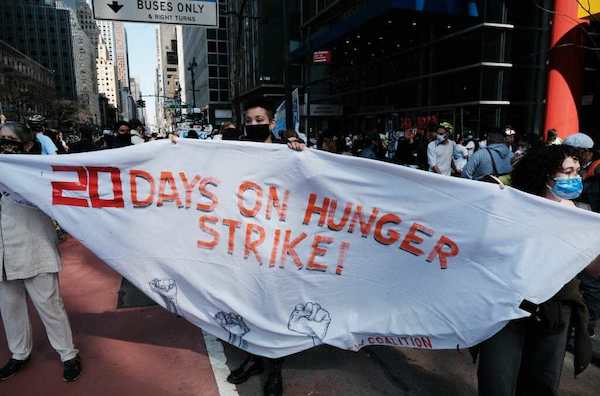 As we mark the second Labor Day under the pandemic, Americans at the top of the income ladder are seeing their fortunes balloon as working families continue to struggle. Frontline workers are reeling from rising infection risks and tensions over mask and vaccine mandates. The unemployed, who are disproportionately workers of color, are facing the expiration of Covid relief benefits at the end of September.

And yet there are reasons to be hopeful that our economy could be more equitable a year from now. Some essential workers are getting long-overdue raises, and federal lawmakers are debating budget proposals that could result in trillions of dollars of public investment in quality jobs in home care, renewable energy, and other much-needed areas–paid for through increased taxes on the wealthy and big corporations. There is also a push to advance much-needed labor law reforms through the current budget negotiations.

As these debates rage on, here are 10 charts on the state of U.S. workers this Labor Day. 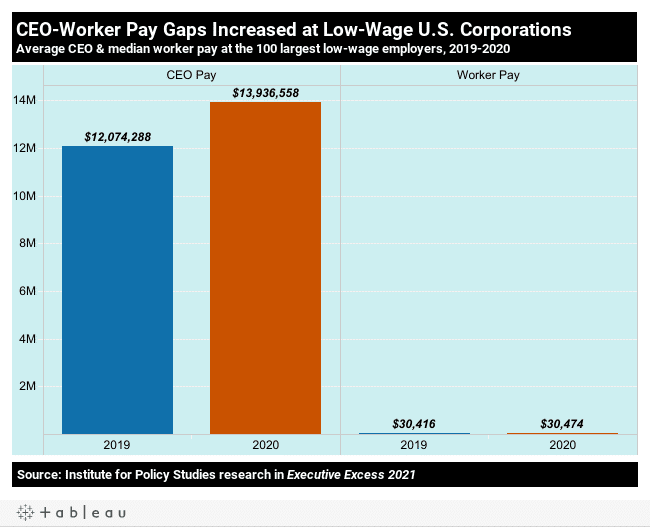 The crisis has fueled the country’s skyrocketing inequality. Among the 100 largest low-wage employers in the country, average CEO pay jumped 15 percent in 2020 to $13.9 million while their global median pay flatlined, according to Institute for Policy Studies analysis. More than half of these 100 low-wage companies rigged their own rules to inflate CEO pay–protecting top executives’ huge bonuses while their workers suffered during the pandemic. 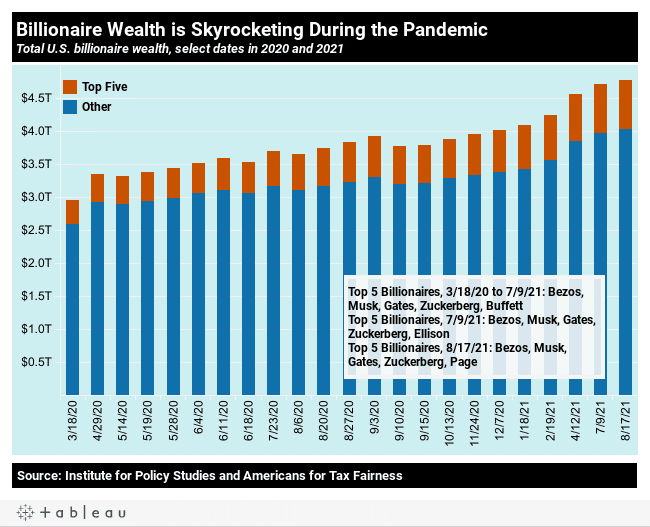 America’s more than 700 billionaires–a list dominated by current and former corporate CEOs–have seen their wealth increase by $1.8 trillion since the beginning of the pandemic, according to analysis from the Institute for Policy Studies and Americans for Tax Fairness. This incredible wealth gain could pay for more than half of the budget framework the House and Senate recently passed to support working families and invest in a just climate transition. The plan’s $3.5 trillion price tag is a ceiling. Congressional committees are hammering out the details, with a final vote expected by October 1.

Pandemic inequalities have hit people of color particularly hard. When Covid virtually shut down the economy in March and April 2020, employers were more likely to lay off Black and Latinx workers than other employees, according to Bureau of Labor Statistics data. The jobs picture has improved, but stark racial disparities remain. As of July 2021, the unemployment rate was highest among Black Americans, at 8.2 percent, compared to 4.8 percent among White workers. The Covid relief program that has offered an extra $300 in weekly unemployment benefits (at least in states that accepted the federal aid) is set to expire in September. 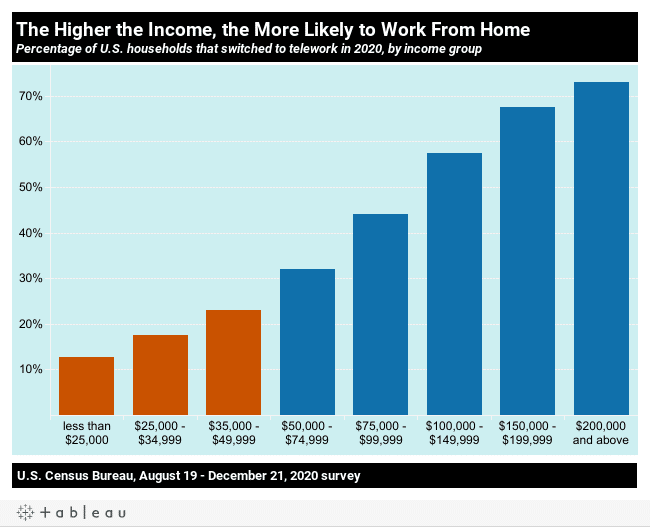 While Black and Latinx workers have relatively high unemployment rates, they also make up a disproportionate share of essential workers who have continued going to their jobs throughout the pandemic. Meanwhile, affluent Americans, who are more likely to be white, have had much more flexibility to work at home, lowering their exposure to the physical, mental, and economic harms of COVID-19. According to a Census survey, adults in households with annual incomes of $200,000 or more were nearly six times as likely to have switched to telework in 2020 than those with income of less than $25,000. 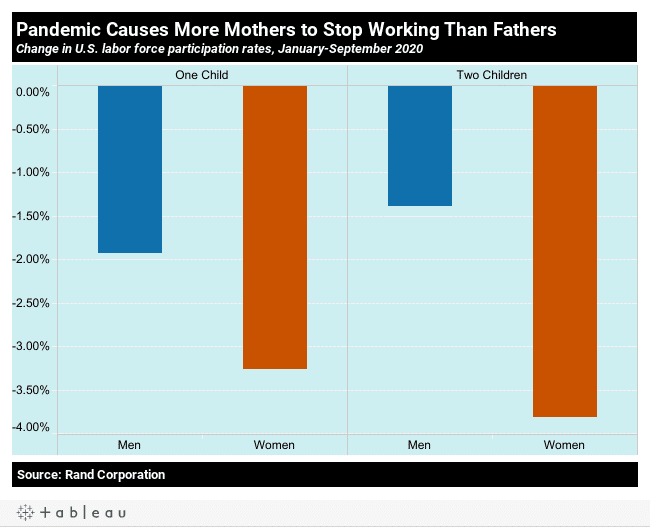 Women have faced particular challenges during the crisis because they tend to shoulder greater family caregiving responsibilities. While the unemployment rate among women was actually slightly lower than that for men in July 2021, this data masks the difficulties faced by many working mothers. A Rand Corporation survey found that women with two children had a 3.82 percentage point drop in labor force participation between January and September 2020, compared to a 1.39 point drop for men with two children. Despite the return to in-person schooling, many women are still being held back from returning to their jobs because of the collapse of the child care system. President Biden has proposed a $225 billion investment in quality child care for working families and another $220 billion for universal preschool. 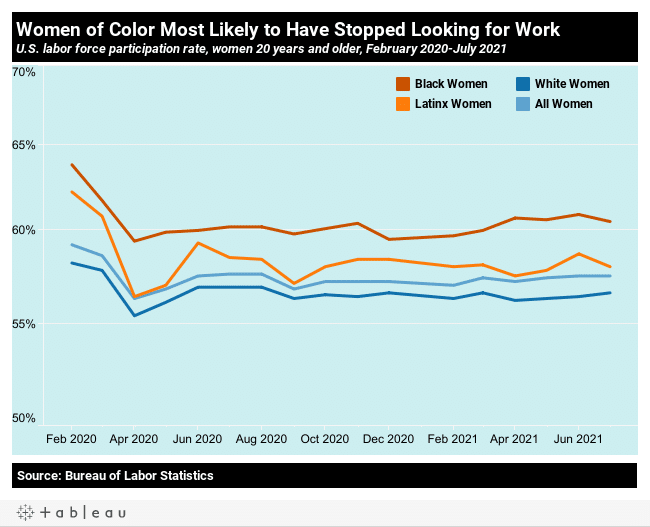 Among all U.S. women who’ve stopped looking for work during the pandemic, the steepest drops have been among women of color. Between February 2020 and July 2021, Black women had a 3.4 percentage point drop in labor force participation and Latinx women had a 4.2 point drop, compared to just 1.6 for white women. On top of caregiving demands, several other factors may have contributed to women of color becoming discouraged from seeking work, including racial discrimination in hiring and layoffs and a reluctance to return to caregiving and other service jobs with high risks of Covid exposure. 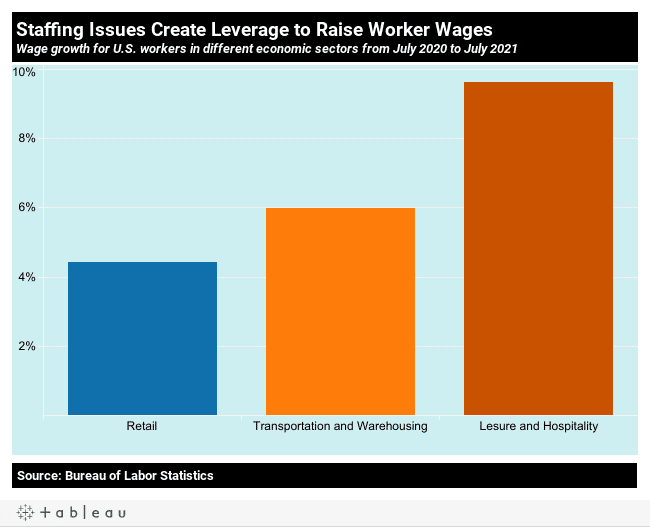 The reluctance of many low-wage service sector workers to return to their jobs–for a variety of reasons–has created leverage for long-overdue pay increases. According to the Bureau of Labor Statistics, as of July 2021, average hourly earnings in the leisure and hospitality sector, which includes restaurants and hotels, were up 9.6 percent over the previous year. In transportation and warehousing, wages were up nearly 6 percent and retail workers were pulling in more than 4 percent more than last year. 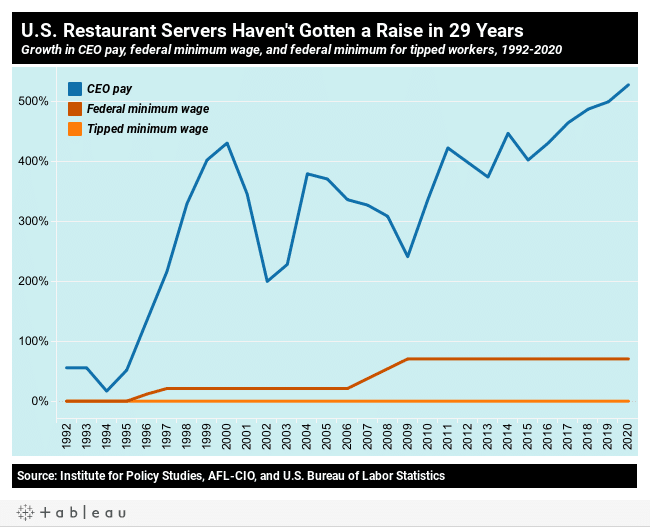 The increase in average restaurant wages is particularly long overdue. While CEO pay has soared, the federal minimum wage for restaurant servers and other tipped workers has been frozen at just $2.13 per hour since 1991. Only eight states have eliminated the subminimum tipped wage. While employers are supposed to make up the difference if workers don’t earn enough in tips to reach the $7.25 federal minimum, this rule is largely unenforced. 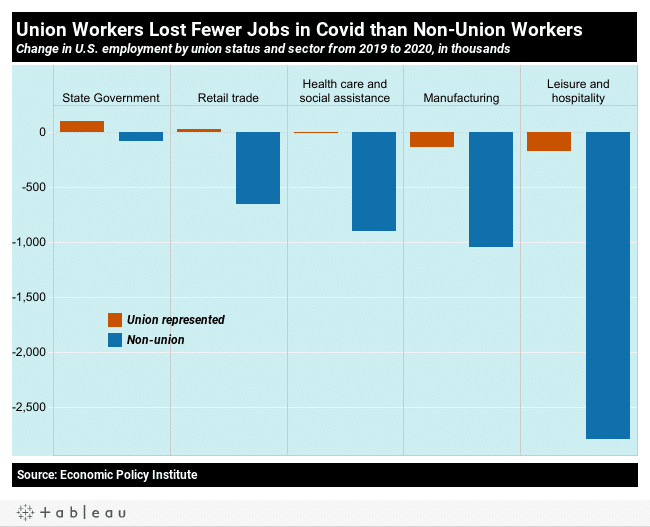 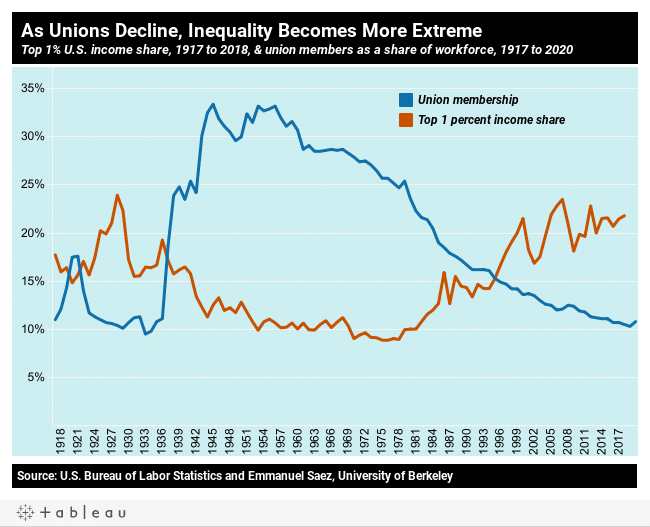 The connection between unions and inequality is clear. As the share of the U.S. workforce represented by a union has declined to less than 11 percent since their peak in the 1940s and 1950s, those at the top of the income scale have increased their power to rig economic rules in their favor, further increasing income inequality. More and more Americans see unions as an important countervailing power. A 2020 Gallup poll found that 65 percent of Americans approve of labor unions–the highest percentage since 2003 and up dramatically from 48 percent in 2009.

The Protecting the Right to Organize (PRO) Act would support unionization by undercutting state “right to work” laws that prevent unions from collecting dues, prohibiting employer intimidation tactics, and other means. After passing the House last March, this landmark legislation has been blocked by Senate Republicans’ filibuster power. A piece of the bill–stiff penalties on employers who violate worker rights–might be incorporated as a revenue raiser in the budget reconciliation package, which will require only straight majority support.

Senate Budget Chair Bernie Sanders has described this package has having the potential to be “the most consequential piece of legislation for working people, the elderly, the children, the sick and the poor since FDR and the New Deal of the 1930s.” But the deal is far from done. Deep-pocketed corporate lobbyists are swarming Capitol Hill to try to block pro-worker reforms. Whether lawmakers stand up to this pressure will have significant bearing on the state of U.S. workers come next year’s Labor Day.

Sarah Anderson directs the Global Economy Project and Brian Wakamo is an Inequality Research Analyst at the Institute for Policy Studies. They are co-editors of Inequality.org.