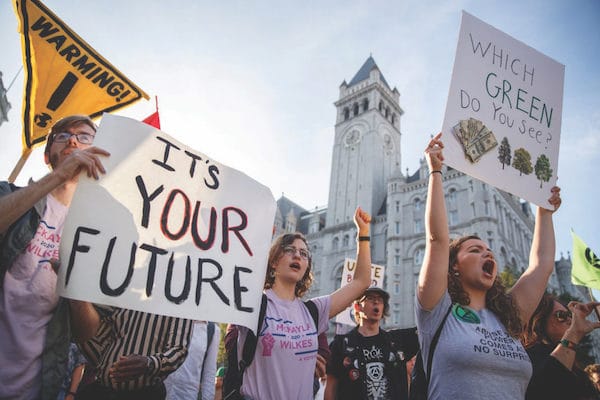 The latest IPCC report paints a picture of five potential futures for humanity. In the worst one, if corporations keep calling the shots, we could see catastrophic warming of up to 5.7˚C. This would spell disaster for ordinary people the world over who would have to cope with extraordinary heat, droughts, storms, and fires. But this could still be avoided. In the best scenario, we limit emissions and warming to the goals of the Paris Climate Agreement, which would allow us to maintain a relatively stable climate.

These potential futures are radically different but, even for the most dire, there is a glimmer of hope. But winning a sustainable, habitable, and healthy planet will require revolutionary change. Workers didn’t cause the climate crisis, but we do hold the solution. An international workers’ movement can, and must, fight for an end to capitalist exploitation of the planet and to secure a safe future for ourselves and our children.

Capitalism Is To Blame

Capitalist exploitation of people and the planet has, up to this point, been enormously profitable for big business. While the super rich can, have, and will build bunkers and sea walls to protect themselves from the worst impacts of wildfires and hurricanes, nothing can protect them from the growing rage of working people who are suffering from the consequences of these disasters. Poor air quality and a subsequent rise in lung disease, rainstorms, and floods on a drastic scale, brutal heat endured in buildings with no air conditioning, and snowfall that keeps people stuck at home unable to work with no guarantee that we will still be paid will all continue to radicalize ordinary people and expose the rot in this capitalist system.

The largest drivers of climate change are major industries like energy, agriculture, and fast fashion. They emit recklessly in order to guarantee mega-profits and then buy off and sponsor politicians to ensure these profits are secure, meaning deregulation and endless subsidies for fossil fuel companies to gobble up.

ExxonMobil, one of the world’s largest companies by revenue, has lobbied against climate science since the 1970s, proving they are (shockingly) capable of thinking long-term, but just for their shareholders of course. In 1982, an internal Exxon memo described “potentially catastrophic events” if fossil fuel use was not reduced. Decades went by and Exxon, BP, Chevron, Mobil, and Shell—all of whom also conducted internal research that predicted global warming and its catastrophic impacts, all while increasing their profits through continued extraction of fossil fuels—fought tirelessly to discredit the science of global climate change.

Now, rather than outright denying climate change, corporations like BP and Shell are rebranding as “integrated energy companies,” hoping that paltry investments in renewables will distract everyone from their ongoing mammoth fossil fuel operations. They continue to expand their existing oil and gas extraction projects while dedicating as little as 3% of their overall spending to low-emissions developments. They are fully aware of the deadly consequences of their actions, but because of just how profitable dirty energy is, they are simply not incentivized to prioritize anything other than their bottom line. In just the first quarter of 2021, ExxonMobil made $3 billion in profits, showing that, despite mass support for moving to renewable energy, polluting industries are still king.

We Can’t Rely On Corporate Politics

The Democratic Party, which claims to be on the side of working people, has limited itself to, at best, quick fixes for the climate and, at worst, total inaction. Frankly, the science has been clear about climate change since the 80s; both parties have had ample time, resources, and power to stop this train in its tracks, but their numerous ties to corporate interests have brought us to the crossroads we face today. Biden entered office paying lip service to youth climate activists, and many of us were frankly relieved after four years of Trump and his horrific attacks on the planet. But Biden completely removed all meaningful climate measures from the $1 trillion infrastructure plan and punted the spending to a future $3.5 trillion “budget reconciliation” bill, which we can be confident will be whittled down by moderate Democrats unless a mass movement is built to force politicians to take serious action to stop climate change.

Biden and establishment Democrats are making big promises to get the country to net-zero emissions by 2050. But getting there will mean taking on major polluting industries, something we know they’re unwilling to do. The establishment takes its cues from big business; we saw this clearly in July when Nancy Pelosi came out against student debt cancellation just days after receiving a letter from billionaire Democratic donors Steven and Mary Swig urging her to do so. What happens when Exxon or BP or Chevron come knocking on their door?

The only guarantee we have that corporate-controlled Democrats will follow through on their climate promises is if we force them to by building a mass movement with concrete, sweeping demands and democratic structures. An important first step could be climate conferences across the country bringing together youth climate activists and working-class people. Like they did with the struggle to extend the eviction moratorium, Cori Bush and the Squad should use their platforms to amplify the call for a democratic, mass movement to pass sweeping climate legislation.

In November, the United Nations Climate Change Conference (COP26) will convene in Glasgow, Scotland and mobilizations across Europe are being planned to demand more than another useless meeting of politicians who are all talk and no walk. International Socialist Alternative will be there in full force on the ground, with members from dozens of sections from around the world, including the U.S. This could be a crucial flashpoint in the struggle for the planet.

We Need a Working Class Movement for the Planet

The working class and youth who make up the vast majority of society are the only force which can bring an end to the capitalist exploitation that allows climate change to continue and worsen unchecked. Admirably, many young people turned quickly toward student strikes in 2019 when the environmental movement was coming to the fore, pointing toward one of the most effective strategies the working class has for winning demands. Demonstrations in the streets, direct action, and—crucially—strikes are the tactics needed to win because they affect businesses where it hurts: their bottom lines.

The system we have right now isn’t broken; it’s working exactly how it’s meant to. The reckless drive for profits inherent in the capitalist system is fundamentally at odds with the health of the planet and of ordinary people. While helping to build the broader struggle to slow climate change, socialists need to tirelessly make the point that the only permanent solution to this emergency is the socialist transformation of society. Given the timeline we have to turn things around, incremental sustainability measures are not enough. We need to take the top 500 companies into democratic public ownership, allowing for the democratic allocation and extraction of resources.

A socialist world is necessary, and possible, if working-class and young people around the world unite to fight for it. To join the fight for a sustainable and genuinely democratic future, join Socialist Alternative today.