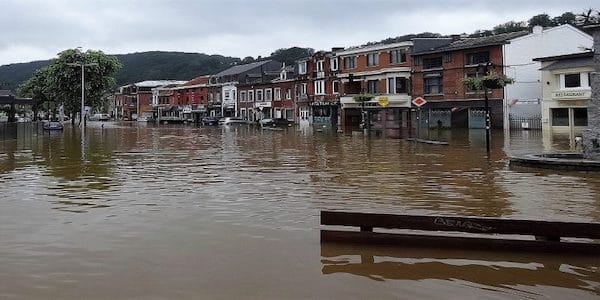 When I was growing up in Kolkata, every monsoon the streets would get flooded. I remember looking forward to the days when school would get cancelled and I would get to stay home and watch cartoons. I would look out from the balcony to see life carrying on, people wading through sometimes waist-deep murky brown water. Somehow it all still seemed fun through the eyes of a child, like an adventure.

This summer, however, as I’ve watched places around the world face historic levels of flooding, I’ve felt nothing but a sense of creeping horror at the onset of the realisation that climate change is here. It’s all happening even sooner than predicted, and will get far worse.

Of course, climate change has already been here for a long time, its effects felt most acutely by the people in the Global South who have contributed the least to the current state of affairs. Yet in the face of unprecedented amounts of rainfall, multiple countries around the world, including some of the richest and most technologically advanced nations, faced deadly flooding in the month of July alone. It would appear that the Global North’s preparedness for climate catastrophe is also far from what many may have expected.

Climate systems are incredibly complex and it is difficult to conclusively prove that this summer’s flooding was caused by climate change. However, these types of weather events certainly fit the model that many scientists have long predicted. Under normal circumstances, jet streams regulate the difference in temperature between the tropical and polar regions. But if they buckle due to a rise in global temperatures then they have a tendency of trapping low pressure depression zones in place for sustained periods of time. This is what happened in Western Germany, where a severe storm complex halted over the Rhineland and rained with such intensity over several days that the rivers Ahr, Erft and the Meuse (Maas) in Belgium all burst their dams. Over 200 people lost their lives due to flooding in Europe. The scale of the devastation, from the waste disposal crisis to infrastructure damage to the increased likelihood of Covid-19 outbreaks at emergency shelters for evacuees, is difficult to truly calculate.

In late May 2020, cyclone Amphan made landfall on the Bengal delta and left behind a trail of unimaginable devastation as it made its way inland. Vast tracts of land were flooded, entire settlements washed away, farmland salinated by encroaching seawater, and entire areas were left without electricity for weeks and months. However, at less than 150, the total death toll in a far more populous region was significantly less than in Europe this summer. We must understand the differences.

As cyclone Amphan approached the mainland, up to 3 million people were successfully evacuated to safety. Due to Bengal’s long and intimate history with severe cyclones and resulting flash floods, both Bangladesh and the Indian state of West Bengal have long-standing evacuation protocols in place. This includes warning systems, transportation routes and emergency rations for subsistence for those affected, many of whom are already among the most impoverished people in the world. In a federalised system such as in India, these measures exist mostly in the form of local state programmes but also NGOs and mutual aid groups which have developed the knowledge needed to deal with flood relief over many decades.

None of this, of course, diminishes the scale of the disaster in the Bengal Delta after Amphan, which left millions without homes and livelihoods, particularly during Covid-19 which had already made people’s lives far more precarious. The difference in death toll between Bengal and Europe also does not downplay the fact that countries like Germany have far greater resources to deal with the fallout of potential natural disasters. Meanwhile, the Bengal Delta will continue to be a hotbed for cyclonic activity, which – especially at a time of spiking food insecurity globally – raises fears of widespread food shortage and famine.

Even though the ruling establishment in Global North countries have long known about the imminent impact of climate catastrophe, there remained a belief that these countries would remain relatively safe. This summer has proven beyond any doubt that neither is there sufficient infrastructure to withstand climate change in these countries, nor will they escape unscathed. Even the funding for the EU’s ‘climate change adaptation and risk prevention and management, cohesion policy’ shows the countries worst affected this summer – Germany, Belgium, Greece – nowhere near the top contributions. The shocking levels of unpreparedness witnessed in Europe and North America in response to an extreme climate is perhaps a signal that post-industrial nations have much to learn from people in the Global South. Out of necessity, they have long established systems of resilience against the worst effects of climate change.

The explicit remit of Global Justice Bloc (formerly Global Justice Rebellion, formed in 2019) is twofold: to steer the conversation within the British climate movement towards one of anticapitalism and anticolonialism; and to facilitate dialogue and sharing of stories of struggle and tactics for resistance from frontline groups around the world. GJB recently hosted a Festival of Solidarity where groups working on issues from women’s and indigenous rights, to housing activism came together to share ideas and actions under the banner of climate justice.

In order for the global climate justice movement to be successful, leadership must come from those who have been most acutely affected by climate change. They are the ones who have the knowhow of withstanding its worst effects. It is crucial that any serious ecosocialist project centres around the idea of climate reparations: that nations in the Global North owe a great historical debt for their contribution towards climate change and must pay for it in kind by aiding countries in the Global South to decarbonise in conjunction with themselves. Because it’s not just the floods. This summer saw record-breaking heatwaves and wildfires across three continents, and every year since 2014 has been the hottest year on record. Our timeline for taking action is rapidly shrinking and it is clear that whatever action we do take must be truly global and truly revolutionary in scale.