Freshly painted banners for the ‘People vs. Fossil Fuels’ protests planned for Oct. 11 thru Oct. 15 outside the White House. The Build Back Fossil Free Coalition is planning the five days of rallies and civil disobedience is calling on the Biden Administration to use its executive authority to declare a climate emergency and immediately stop new fossil fuel projects and crack down on existing production. (Photo: Josh Yoder / Look Loud )

Organizers for climate justice are making final preparations Sunday ahead of five days of planned actions this week to confront President Joe Biden over the urgent need to declare a climate emergency, ditch fossil fuels, and move swiftly to create a green energy economy that can create millions of new jobs in the process.

“As fires burn, oceans rise and cities flood, we’re mobilizing to Washington D.C. to demand that President Biden act on climate justice right now,” said Joye Braun, a frontline community organizer with the Indigenous Environmental Network (IEN), a key member of the coalition behind the week-long mobilization dubbed “People vs. Fossil Fuels” which will kick off Monday, include daily civil disobedience at the White House, and culminate Friday with a march on the Capitol Building for a mass sit-in.

“The fossil fuel industry has brought devastation to our homelands and it’s time that we bring this fight to Biden’s doorstep,” said Braun.

The group’s detailed and complete list of demands can be found here and those who wish to get involved can visit this page on the coalition’s website.

In their invitation to join the cause and back the demands put forth by front-line organizers from around the country, the coalition said:

We are asking you to stand with us. As representatives of communities who have carried the brunt of the harm from fossil fuels for generations, we ask you to join us in solidarity. If we all come together, put our bodies on the line in the name of climate justice, we may be able to change the course of history.

The ‘Build Back Fossil Free’ coalition organizing this week’s mobilization says that Biden has both the executive authority and the popular mandate to act aggressively to address the climate crisis but so far has not acted with nearly enough urgency.

“Biden is faced with a momentous decision, and I and others will be gathering in Washington to encourage that decision: to declare a climate emergency, stop the petrochem build-out, and usher in a just transition to a clean, green renewables economy,” said John Beard, director of the Port Arthur Community Action Network, a Texas group fighting the oil and gas industry in the Gulf Coast.

The fossil fuel resistance is coming to the White House.

This is a test for @POTUS: the People or Fossil Fuels?

“President Biden came into office promising bold action to transform our economy with renewable energy and good jobs, but he passed the buck to a dysfunctional Congress,” said Jean Su, director of the Center for Biological Diversity’s Energy Justice program.

Biden has immense executive powers to speed the end of the fossil fuel era and ignite a just, renewable-energy revolution. Without executive action on fossil fuels, there’s no way for the president to protect us from the climate emergency. We’re calling on Biden to reclaim his power from coal- and gas-state Senators and show us he can be our Climate President. 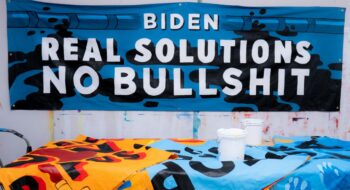 Despite the President’s rhetoric, his administration has failed to stop major projects like the Line 3 tar sands pipeline, defended oil drilling in the Arctic, promoted fossil fuel exports, and allowed drilling, mining and fracking to continue on Native and public lands.

Meanwhile, the impacts of the climate and pollution crisis have only grown worse. Hurricanes have devastated communities from New Orleans to New York City. Wildfires have burned millions of acres across the West. Historic droughts and heatwaves have gripped most of the country. And every day, millions of Americans, especially Black, Brown, and Indigenous People, breathe air and drink water poisoned by fossil fuel pollution.

As Common Dreams reported, over 300 scientists last week backed the demands of the coalition and said that to avert ‘uncontrollable climate chaos,’ Biden must move more swiftly and concretely to end the age of fossil fuels.

“U.S. scientists are done speaking calmly in the face of inaction,” said Sandra Steingraber, a biologist and co-founder of the Concerned Health Professional of New York, who signed a letter alongside 337 colleagues.

Terrified by our own data, we stand in solidarity with the People vs. Fossil Fuels mobilization and its demands. President Biden, listening to science means acting on science. It means stopping new fossil fuel projects, opposing industry delay tactics, and declaring a national climate emergency.

When scientists across the U.S. are imploring the president to get the country off fossil fuels, it’s time to listen.

Correction: This article has been updated to better describe the planned events in Washington, D.C. over the course of the week.