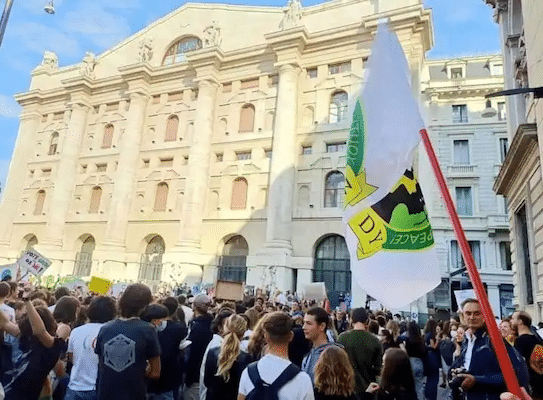 Journalists from the U.S. and Europe have warned that the summer of 2021 should be a wakeup call on climate catastrophe. Rightfully so. A slew of recent studies and the Intergovernmental Panel on Climate Change (IPCC) had already issued dire assessments even before the wildfires, droughts, floods, Hurricane Ida and extreme heat waves shocked the world.

Everything points to the same reality–the efforts of climatologists to predict the timing and impact of global warming have been too conservative. The events of summer 2021 rendered the newest scientific pronouncements almost unnecessary. Deaths in the thousands and destruction in the billions of dollars, widespread and all in a matter of a few weeks, spelled it out clearly.

You don’t have to be a scientist to understand that climate change’s terrible effects are worsening sooner than expected. The situation is urgent.

What the mainstream journalists and scientific studies omit is the weakness of capitalist government responses, the conspiracy of sabotage by big corporations and banks, and the meticulously concealed contribution of the imperialist U.S. military to pollution and climate change.

The fight against global warming is shackled by capitalists chasing down profits at all costs. That planet-threatening quest for markets and money isn’t a policy that can be changed by electoral politics. It’s an inherent trait of the capitalist system. The fight against climate change must be a revolutionary struggle against capitalism and imperialism.

Just before the 2021 disasters began raining death and destruction in June and July, a Greenpeace investigation–a climate activists’ sting operation–tricked a top ExxonMobil lobbyist into revealing company efforts to promote climate change denial. It’s egregious and normally kept under wraps, yet all perfectly legal under capitalism.

ExxonMobil’s senior director for federal relations talked about working with “shadow groups,” supporting a carbon tax that had no chance of getting through Congress just for the sake of climate change PR, all the while influencing senators to weaken climate elements of Biden’s infrastructure bill.

“Joe Manchin, I talk to his office every week,” the Big Oil flack bragged.

We look for the moderates on these issues.

The “shadow groups” are a huge network of think tanks and pressure groups like Heartland Institute, Competitive Enterprise Institute and the Heritage Foundation. The oil giants have been using them to spread disinformation and downplay the dangers of global warming for decades. ExxonMobil alone spent more than $30 million doing that between 1998 and 2014.

The sting resulted in a congressional investigation, which is still going on, but is predictably toothless. Letters to ExxonMobil, BP America, Chevron Corporation and Shell Oil ask them to testify about their disinformation campaigns and commit to stopping them so that future legislation to mitigate climate change might stand a chance of getting through Congress.

Essentially, the investigation demands that they admit their guilt and promise to be better, but nothing will happen to them if they don’t abide.

Imperialism is the culprit

A bill proposed by two members of the congressional group known as “The Squad” aims to choke off Federal Reserve financing for projects that contribute to the climate change disaster.

It has little chance of getting past the corporate-backed politicians in either party, but it revealed the extent to which the major institutions of capitalism add to the crisis, even as their politicians feign concern. The Federal Reserve is supposed to supervise and regulate bank operations, but is financing the continued extraction of fossil fuels.

There is also a concerted push to shift the onus of climate change efforts onto the backs of those countries that have been exploited and underdeveloped in the age of imperialism. The biggest factor in the existential threat of global warming is still the global dominance of the capitalist system, even as the development of the Chinese economy is affecting that balance.

The narrative of the U.S. major media places the blame on poor countries and China’s rising economy for greenhouse gases while touting the “greening” of U.S. capitalism. This marketing subterfuge conceals the efforts by giant energy companies and multi-trillion-dollar banks to maintain their profits at all costs.

It’s made easier by the successful U.S. pressure to leave massive Pentagon pollution out of international calculations.

Blaming the Global South is a purposeful distraction. Placing the blame where it belongs–on the big imperialist powers and the profit system–is an essential part of being able to leave the planet in inhabitable condition for future generations.

As a result of the Paris Accords, wealthier countries were obliged to contribute $100 billion to impoverished countries to help finance clean energy projects before the next major international climate talks, scheduled to take place in November in Copenhagen.

In an international pre-meeting that concluded in early October in Milan, Italy, the fact that the rich capitalist economies still haven’t met that obligation became a contentious issue–not only inside the meeting hall, but outside, too, as hundreds of youth, led by activist Greta Thurnberg, lambasted their foot-dragging.