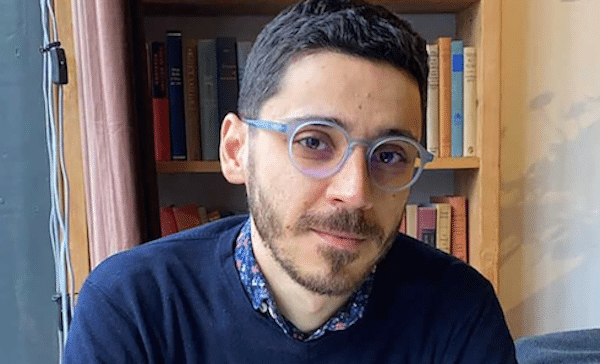 It was led by the British-based trade union solidarity movement, Labour Start, with the support of more than thirty international organisations and over 2,500 academics.

Erdal’s release is conditional, with him subject to strict conditions. He must remain in Turkey and must report to the local police station twice per week.

And he still faces trumped-up charges, alongside 107 co-defendants, in one of Turkey’s biggest mass trials, the latest stage of which resumes on October 18. Nineteen of his colleagues remain in pre-trial detention.

Until his bail, Erdal was one of thousands of political prisoners in Turkey. Many have been held in appalling prison conditions. They include social activists, opposition supporters, Kurds, academics, lawyers, journalists, students, civil servants and members of the military.

Like numerous others, Erdal, who is an academic with permanent residency in Canada, is on trial for crimes he did not commit. A trade union, peace and LGBTI+ campaigner, he was targeted by the Turkish regime because, seven years ago, he was a leading figure in the left-wing, pro-Kurdish People’s Democratic Party (HDP) in Turkey, and a member of its central executive committee.

The HDP is Turkey’s third-largest party. It was, and still is, a legal party but opposes many of the policies of the increasingly autocratic Turkish government. Among Erdal’s co-defendants are the HDP’s former co-spokespeople Selahattin Demirtas and Figen Yuksekdag.

Erdal’s arrest last year was part of a large-scale round-up of HDP supporters. According to the government, the HDP incited a deadly insurrection in October 2014, when it urged thousands of people to take to the streets in south-eastern Turkey to protest against Ankara’s failure to protect Syrian Kurds against ISIS.

Prosecutors have charged a total of 108 defendants and are seeking multiple life sentences and thousands of years in prison without parole. They claim the call for demonstrations led to public unrest, large-scale violent incidents, murder and terrorist attacks.

Typical of the flimsy case against the defendants, the authorities allege that Erdal “knowingly and wilfully contributed to the committing of unlawful acts which occurred between 6-8 October 2014.”

However, the indictment lists only two pieces of evidence against him: two Facebook posts.

These were a repost of a statement by Demirtas expressing the HDP’s support for the Kurds in Kobane and a repost of an article about the killing of a young man by state security forces during their repression of Kobane solidarity protests.

Many people believe that he is on trial simply because, back in 2014, he was in the leadership of the HDP, which the Turkish state is out to crush.

As well as the vague catch-all of “disrupting the unity and territorial integrity of the state,” the 108 defendants face 37 charges of alleged “homicide,” even though most of the dead were killed by the police, far-right nationalists and other unknown persons.

HDP leaders made clear their opposition to violence but their proclamations to this effect have been dismissed.

Other charges include 29 attempted murders and 3,777 charges of damage to property. If found guilty, the defendants could collectively face a total of 1,625,000 years in jail.

The charges are being quoted as justification for proscribing the HDP. Last month, the constitutional court ordered the HDP to go on trial, calling for the closure of the party and for 451 HDP members to be banned from political activity for five years.

At stake in the upcoming trial is not just the fate of Erdal and his co-defendants, but the survival of the HDP and Turkish democracy itself.