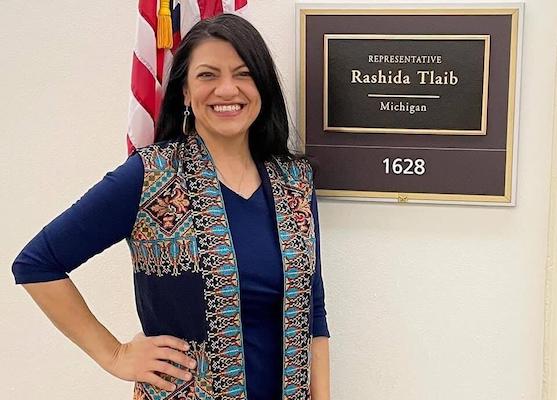 I argued in my last article that the hatred coming from the Jewish community is not confronted because it comes in the guise of fighting antisemitism. Ten days ago we saw another example of this hatred that has no name. The target was once again Michigan congresswomen Rashida Tlaib. So, what did Tlaib do this time? 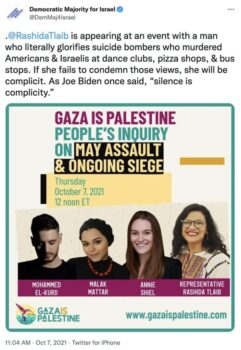 Democratic Majority for Israel alleged that Tlaib “is appearing at an event with a man who literally glorifies suicide bombers who murdered Americans & Israelis at dance clubs, pizza shops, & bus stops. If she fails to condemn those views, she will be complicit. As Joe Biden once said, ‘silence is complicity.’”

So, who is Mohammed El-Kurd? As readers of this site know, he has gained an international following because Jewish settlers are trying to take away his family’s house in Sheikh Jarrah. He is a hero of nonviolent resistance. Wikipedia says he has become the face of the protests of Palestinian evictions in East Jerusalem: He has been interviewed on MSNBC, lately became the is the Palestine Correspondent for The Nation, and Time magazine named him one of the 100 most influential people in the world.

We know the accusation against El-Kurd is a lie because if El-Kurd truly “glorified suicide bombers who murdered Americans & Israelis” the way a normal person understands those words, the Anti-Defamation League would have made sure that El-Kurd got nowhere near MSNBC; and being the Nation‘s Palestinian correspondent would also not be in the cards.

Yet, the Democratic Majority for Israel (DMFI) is now claiming that by appearing with El-Kurd, Rashida Tlaib is “complicit” in suicide bombings. Words mean nothing to hasbara culture. Once again, we see that when it comes to supposed enemies of the Jews, defamation and dishonesty are no vice.

This discourse destroys everything in its path. It is what paralyzes American political culture with respect to Middle East policy and is the real power of “The Lobby.” While many readers will shrug their shoulders and say “Whatever”- Who believes this anti-Palestinian propaganda anyhow? The answer is, A lot of people, especially in the Jewish community.

And this isn’t just a random tweet. This is a part of a campaign of demonization coming from the mainstream Jewish community. The DMFI tweet is suggesting that Tlaib wants Jews dead. This isn’t negative campaigning; it is cultural poison. I have shown that Rashida Tlaib, a Palestinian-American Muslim, is guilty of nothing and is no antisemite.

Yet, President Biden says that DMFI, a two-year-old organization, “has been a powerful voice standing up for our party’s principles,” and Nany Pelosi says that DMFI has become “a vital force in advancing Democratic values.”

No mainstream politician has the courage to stand up to DMFI’s hate mongering. That’s the power of hasbara culture. Who wants to be thought of as being on the side of the enemies of Israel?

The fact that Peter Beinart is on the side of Rashida Tlaib and not DMFI and her tormentors also means nothing. Because it is Jonathan Greenblatt, Bari Weiss and Bret Stephens who have the last word on who is and isn’t an anti-Semite. Beinart argues that it is demonizing Palestinians that is the Jewish betrayal. What makes Weiss and Stephens more authentically Jewish than Beinart? It can’t be emphasized enough that DMFI and hasbara culture journalists are the least objective people about what’s going on in Rashida Tlaib’s head, let alone Mohammed El-Kurd’s. 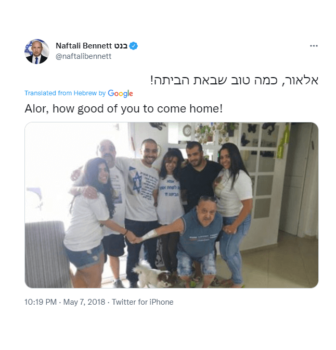 As Beinart tweeted, the DMFI “talking points crumble under the slightest scrutiny.” But it doesn’t matter because hasbara culture reigns supreme, with its imagination of sacred macho victimhood.

And not only are innocent Palestinians demonized in the Jewish discourse as Jew haters, but the real haters in the Israeli Palestinian conflict get off scot-free.

Let’s look at some of those haters.

In a healthy political culture the Prime Minister of Israel Naftali Bennett would have a lot of explaining to do before he got any kind of audience at the White House and the State Department, at both of which Bennett got red-carpet treatment in August. Here is Bennett welcoming home the extrajudicial murderer Elor Azaria, the soldier who did a short prison term for shooting a prone Palestinian man in the head as he lay arrested and incapacitated on the street in occupied Hebron in 2016.

You don’t have to believe me that Azaria is a murderer, there is a video.

There is only one country where a killer like Azaria can be celebrated, and that’s Israel, and the reason the unrepentant Azaria is lionized by mainstream Israeli culture is because he’s a vigilante for the Jews. According to hasbara culture thinking, only self-hating Jews can object to what Azaria did. And the Prime Minister of Israel took Azaria’s side against the army court and judicial system. And no one thinks that’s worth calling this out.

It should also be taboo to be seen with the Israeli ambassador to the U.S., Gilad Erdan. When Erdan was Israeli public security minister, he insisted on accusing an innocent Palestinian schoolteacher, Yacoub Abu al-Qi’an, who was killed by Israeli police, of a car ramming terrorist attack– even after it was established by the Israeli police themselves that no such thing happened, Abu al-Qi’an was driving away from his village so he would not see his house being demolished by Israeli forces. But Erdan claimed Abu al-Qi’an was a radical Muslim and was “undoubtedly guilty” of a terrorist attack.

When you look at Erdan and his ugliness–which peaked last month when he slandered an innocent civilian, who was shot to death by policemen in the Bedouin village of Umm al-Hiran, and accused him of carrying out a terror attack–it must be seen as an invitation to reexamine the Zionist project. After all, it’s unbelievable that a national movement whose official founding moment is the Dreyfus affair can stand idly by in view of such an incident.

Like Bennett, Gilad Erdan’s unconscionable behavior is only possible in Israel. But there is no authority that Erdan has to answer to.

It should also be taboo to publish former Israeli ambassador to the U.S Michael Oren. Contemplate the Oren tweet below and the logical conclusion by the activist Gary Spedding:

By advocating for extrajudicial killings, using an example where a Palestinian perpetrator has killed Israelis, he is effectively asking to give the IDF license to kill Palestinians without any restrictions, legal safeguarding or basic respect for life and judicial process. https://t.co/kQtl8QR1Lk

Oren’s tweet serves to vindicates soldier/murderer Elor Azaria. Because Azaria did exactly what hasbara culture is constantly telling him to do.

Rashida Tlaib is “complicit” in nothing. But Michael Oren is complicit in the extrajudicial killings of Palestinians.

It should be obvious that Hasbara culture is the real power of the “Israel Lobby.” Think about the fact that House Majority leader Steny Hoyer can’t summon the courage to call Netanyahu a racist. The Jerusalem Post:

Asked point blank whether he agreed with the characterization used by Democratic presidential candidate Beto O’Rourke of Netanyahu as a ‘racist,’ Hoyer responded, “I don’t think he’s a racist. Period. No.”

In the real world, Netanyahu’s warning to his voters, “The Arabs are coming out in droves” is the definition of trafficking in racism. Again and again in recent elections Netanyahu claimed his opponents were going to give the country to the Arabs. And Netanyahu legitimized the “Jewish Power” party– the Israeli version of the Ku Klux Klan, in an attempt to form a government with them.

So in front of the whole world the Democratic Majority for Israel is cultivating the most toxic hatred against Rashida Tlaib, but since it’s supposedly on behalf of Israel and the Jewish people, it’s called “hate fighting” and no politician will speak up for her.

Hasbara culture hate will not desist until its hatred is given a name.