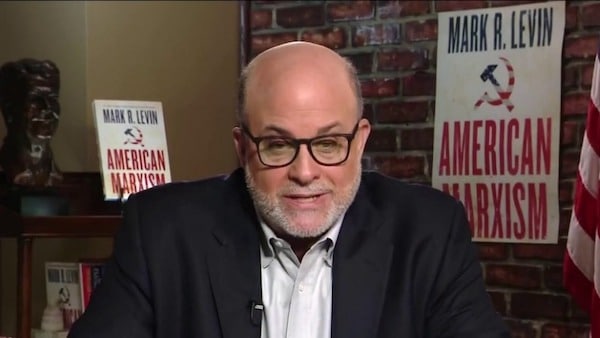 Every thuggish movement needs its cover of respectability and even scholarly, theoretical pillars. This is the role played by Mark R. Levin, whose newest tome ‘American Marxism’ provides squawking points for the radically neo-fascist, lumpen Republican Party. (Screengrab from Fox News)

Every thuggish movement needs its cover of respectability and even scholarly, theoretical pillars. This is the role played by Mark R. Levin, whose newest tome American Marxism provides squawking points for the radically neo-fascist, lumpen Republican Party, which has been increasingly embracing the political agenda of libertarian infiltrators from fossil fuels, tobacco, agribusiness, Big Pharma, and the financial sector. Their objective? To undermine the Administrative State, its policies, regulations, and citizen entitlements.

The obvious names come up: The Koch brothers, Philip Anschutz, the Coors beer family, the late Aubrey McClendon of Chesapeake Energy, Robert and Rebecca Mercer, among others. Karl Rove himself—the GOP political strategist and Bush II’s deputy chief-of-staff for policy—called the Republican Party coalition in the 2000s a group of rednecks, conspiracy theorists, and Bible-thumpers in leaked emails that roiled the Republican National Committee and party base. 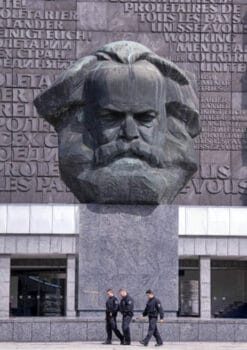 Policemen walk in front of the Karl Marx monument close the scene of an altercation in Chemnitz, Germany, Friday, Aug. 31, 2018. The protest late Monday, sparked by the killing of a 35-year-old German man in an altercation with migrants over the weekend, erupted into clashes between neo-Nazis and left-wing counter-protesters. (AP Photo/Jens Meyer)

GOP Sen. Charles Grassley privately referred to his Iowa constituents as lazy and spendthrift, drug and alcohol-addicted losers not deserving of a dime from the social welfare state. Because the GOP establishment had disingenuously used its party base, which became disillusioned with all establishment politics, wealthy radical libertarian and extreme right-wing elements filled the vacuum to create a shadow party in its midst. Such Tea Party “astroturf” organizing, fronted by Koch financing, was exposed by Jane Mayer in her 2016 book Dark Money, just in time to anticipate Donald Trump.

Trump’s reactionary, neo-populist rhetoric delivered him the party nomination over the stalwart party establishment. The shadow party had radicalized the militant base to do disruptive and violent political dirty work on behalf of their corporatist sponsors through racist innuendo, baiting of minorities, outright lying, misinformation, and propaganda. The new reality of the Republican Party threatens the very foundations of American democracy. The Jan. 6, 2021, far-right insurrection at the U.S. Capitol and coup attempt by President Trump to stop certification of the 2020 election aimed its fury not only at congressional Democrats but also those with insufficient fealty to the president such as Mike Pence, Liz Cheney, and other mainstream Republicans.

What is the radicalized GOP, with its agitated, angry base, fighting against, anyway?

Here’s where self-declared intellectuals step in to delineate the turf. The suffusion of our society in Marxism, according to Fox News host and radical libertarian podcaster and author Mark R. Levin, “is devouring our society and culture, swirling around our everyday lives, and ubiquitous in our politics, schools, media, and entertainment.” He portrays the newly aroused Republicans and all extreme conservatives as heirs and protectors of both the Constitution and the legacy of the American Revolution.

Levin rhetorically inverts the forces of repression in a gaslighting maneuver to tar all liberals and leftists as Marxist authoritarians. This new epidemic of red-baiting is a third Red Scare exposing a Republican Party being torn apart internally by its own civil war, and also its own intellectual exhaustion. In places, this movement has lifted such dishonest conspiracy theorists as Marjorie Taylor Green and Lauren Boebert to the GOP House delegation. Almost unanimously, cowed mainstream GOP Congressmembers bought into the 2020 election Big Lie and other unreality, banking their future campaigns on misinformation emanating from the Planet Earth.2 they believe their constituents inhabit.

Levin’s American Marxism is written for that constituency like a bad senior thesis in American political history. Of its 276 pages of text, 241 are mostly cherry-picked, page-long quotations from the writings and books of supposedly “Marxist” offenders, each poorly interpreted with a few brief sentences of forced, often incongruent analysis. Levin’s intellectual support clearly derives from pseudo-intellectual fringe figures such as ultranationalist Julien Benda and libertarian Ayn Rand, and marginal scholars from conservative colleges, as well as from economists like Milton Friedman, James Buchanan, and Friedrich A. Hayek—Nobel Prize winners despite the fact that their economic theories never worked in the real world. 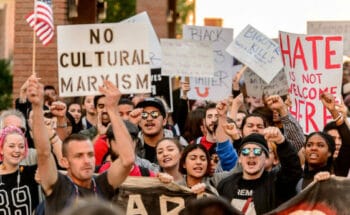 Intellectually lazy, sloppily assembled, riddled with errors of fact and interpretation on almost every page, American Marxism serves to be memorized and repeated like a catechism for its conservative reading audience, a piece of right-wing propaganda providing arguers convenient sound bites. (Photo: Trent Nelson / The Salt Lake Tribune via AP)

In his last chapter, “We Choose Liberty!,” Levin advances several militant action proposals to propagandize and radicalize GOP readers, some of whom are sending death threats to local and state officials over the Big Lie, and to schools boards over the teaching of American history, the influence of Critical Race Theory, and mask mandates. The Justice Department is currently investigating such threats. This radical libertarian manifesto could be pulled directly from internal organizing documents produced by Americans for Prosperity, Turning Points USA, The Heritage Foundation, Americans for Tax Reform, or the American Legislative Exchange Council (ALEC), all front organizations funded by extreme-right millionaires and billionaires.

Intellectually lazy, sloppily assembled, riddled with errors of fact and interpretation on almost every page, American Marxism serves to be memorized and repeated like a catechism for its conservative reading audience, a piece of right-wing propaganda providing arguers convenient sound bites. The book has sold over 700,000 copies since its July 2021 release date. Its chapters cover subjects such as the supposed authoritarian nature of democratic, grassroots movements like Black Lives Matter and Antifa, and their tenuous connection to Marxism; a paranoid, ahistorical attempt to link all progressive advances to Marxism and Critical Theory; diatribes denouncing how such theories are destroying the country and dividing us through our public educational system; a denial of climate change and any remedies to it; and unfounded accusations that the mainstream news media and corporate America carry water for the Democratic Party and Marxist worldviews while “canceling” conservative expressions from exposure.

It’s a vast plot to deprive Americans of their political freedom and economic liberty, and Levin uses red herrings from the first and second Red Scares of 1919-23 and 1940-54 to make his case. This political strategy was used by the GOP unsuccessfully in the 2018 and 2020 elections. Biden won the 2020 election with a wide margin from voters making $50,000 to $99,000 a year. The middle class fled both Trump and the proposals of the extreme right.

In 1949, Frankfurt School and the Institute of Social Research scholars Leo Lowenthal and Norbert Guterman (Levin mistakenly calls it the “Franklin School”) published their classic post-Hitler study of the American agitator, Prophets of Deceit (new edition Verso Books, 2021), a treatment of right-wing and fascist propaganda techniques. “Unlike reformers or revolutionaries,” they noted, “the agitator makes no effort to trace social dissatisfaction to a clearly definable cause. The whole idea of objective cause tends to recede into the background, leaving only on one end the subjective feeling of dissatisfaction and on the other, the personal enemy held responsible for it.”

Levin is an agitator in the American grain, tossing the Democratic Party, liberals, and all leftists together as a Marxist front. This would be news to American Marxists and the members of the CPUSA, since during the first two Red Scares, the Democratic Party at every level of governance routinely threw all American Marxists, and suspected Marxists who were not, under the bus when politically expedient. In fact, it is this history of anticommunism and repression in the history of the Democratic Party that has paralyzed its ability to initiate a Western European-style social democratic agenda without red-baiting by the GOP.

Capitalism and its discontents

Conservatives routinely confound effective federalism with authoritarianism. It was reactionaries in every age who opposed policies such as a reduction of the workday; an end to child labor; a graduated income tax; a sub-treasury system to deal with the money supply and deflation/inflation; pensions for war veterans; direct election of U.S. senators; regulation of railroads and the telegraph system; and the secret ballot, among other necessary reforms. The progressives of those times were not flaming Marxian socialists, but rather conservative and rural farmers, ranchers, farmhands, and small-bore capitalists ground under by monopolistic railroads and agribusiness. Many of these reforms, including protection for union organizing, were realized during Franklin Delano Roosevelt’s New Deal. In the language of Marx and Engels, the disenchantment with capitalism itself among both rural and urban populations organically arose from contemporary conditions: Capitalist democracy breeds its own discontents. 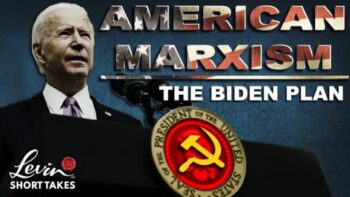 A graphic from Levin’s online ‘Shorttakes’ program from Blaze TV depicts President Joe Biden as a crazed Marxist imposing a Soviet dictatorship on the United States. (Graphic: via Blaze TV)

The current political, legal, and social system in the United States has evolved over time through constitutional amendments and statutory law to where most ordinary folk can pretty much think and do what they want within legal and humane limits. No conservative’s guns, religion, and private property are being taken away today. But it is far from perfect since American capitalism embodies systemic structures that enable continuing racism, imperialism, patriarchy, gender discrimination, and classism. American workers do not enjoy the unfettered right to form unions, despite the great majority who would like to be represented by one. Women are increasingly being deprived of control over their own bodies. Nor is wealth and income taxation adequate to meet the needs of the commonweal. Indeed, the great class divide is sharpening, and Levin sees no problem with that.

Critical Race Theorists, against whom Levin rages, focus their research on systemic structures, a methodology based upon macro-analyses of hard social science data going back a century or more. Empiricism, induction, and data do not lie: Over 100 years of data reveal systemic patterns that can be analyzed for practical public policy formation so that taxpayer resources are not wasted and are allocated fairly in knowable and quantifiable ways. Without such analysis, and with policy driven by emotions stirred up by the 1%, what we have is a class division that worsens in every decade—and, we might add, with every pandemic. 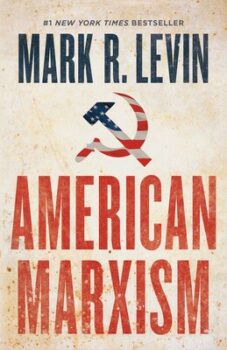 American Marxism is a textbook example of how an agitator mobilizes his followers to engage in extreme acts of political violence and other disruptions. As we have seen during the Trump Administration, hateful political speech and rhetoric have real-world consequences of aggression, evidenced by the rise in hate crimes and mass shootings by extreme-right camp followers.

Chillingly, Levin complains that the enemies have soiled our fair land, that ideological disease and germs are contaminating America, and that it’s time to “clean house.” The echoes of fascism are too strong to ignore. American Marxism’s polarizing rhetoric and mischaracterization of the American left essentially put a target on the back of everyone left-of-center. Expect Levin’s talking points to factor prominently in the 2022 election cycle and beyond. And expect more right-wing political violence.

Matthew F. Bokovoy (Ph.D., Temple University) is senior acquisitions editor for Native American and Indigenous Studies, General Nonfiction of the American West, and Borderlands History for University of Nebraska Press. He is a U.S. social, cultural, and intellectual historian of the 19th and 20th centuries who taught at Temple University, University of Pennsylvania, and Oklahoma State University. He is author of The San Diego World’s Fairs and Southwestern Memory, 1880-1940 (University of New Mexico Press, 2005).