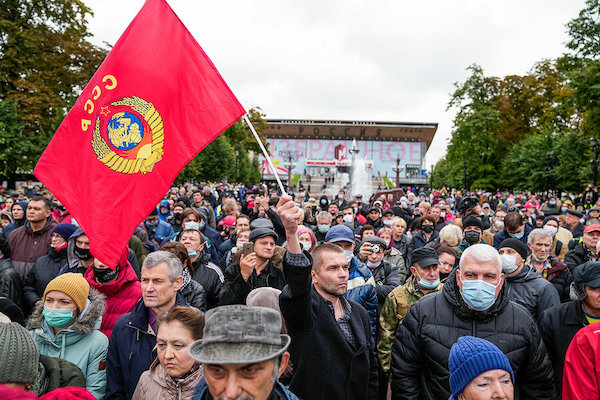 Boris Kagarlitsky, a veteran left-wing dissident, holds the distinction of having been a political prisoner under the regimes of Leonid Brezhnev and Boris Yeltsin. Now he can add President Vladimir Putin to that list. He’s just been released after a 10-day stint in a Moscow detention center for posting a link to a Communist Party statement alleging electoral fraud during last month’s parliamentary elections.

Mr. Kagarlitsky had been in Siberia working as a political strategist for a prominent Communist candidate for the State Duma, Russia’s lower house of parliament. He returned to the capital to find that the pro-Kremlin United Russia (UR) party had swept all the city’s constituencies. That was in defiance of exit polls and votes counted at polling stations, after tens of thousands of unverifiable “electronic votes” appeared and decisively reversed results.

A veritable encyclopedia on the subject of Russian electoral dirty tricks, Mr. Kagarlitsky says he has never seen fraud at this level. “What happened in Moscow was simply theft on a grand scale,” he says.

It testifies to how terrified Russian authorities are, even of the permitted electoral system that they created, that they would do this.

The independent election watchdog Golos estimates that at least 78,000 fraudulent ballots were filed through the new system of electronic voting in Moscow, denying the Communist Party (KPRF) several wins. Now the party, which has long been tolerated by the Kremlin as a voice of opposition, is fighting back.

While some rank-and-file members want them to push harder if they ever want to make political headway, their nascent protesting has resulted in a decisive wave of official repression. The backlash is unprecedented in post-Soviet experience and threatens to upend two decades of Putin-era political stability.

A new kind of crackdown

Mr. Kagarlitsky, a well-known scholar who belongs to no political party, was arrested Sept. 30 when he arrived at the Higher School of Social and Economic Sciences, where he lectures. He was subsequently sentenced for sharing banned content on social media. He maintains he posted what he thought was a routine political critique about the voting fraud and linked to a KPRF statement that mentioned party rallies. He says he didn’t know the rallies had been prohibited by authorities.

“To be arrested, tried, and convicted for something that just didn’t happen is a new thing, at least in our times,” he says.

This kind of political repression is new and a worrisome omen for the younger generation.

Russia under Mr. Putin is increasingly cracking down on critics. Over the past year, authorities have cast an ever-wider net, first arresting anti-corruption campaigner and longtime Putin rival Alexei Navalny, who was poisoned last year, and then closing down all of his political organizations. Many civil society groups have been branded “foreign agents,” some forced to close their doors. Independent media outlets have been similarly hounded.

Now it appears the turn of the officially permitted opposition parties, whose different viewpoints can generate a range of debate, especially on domestic policy. 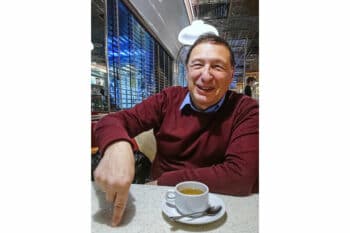 Fred Weir – Boris Kagarlitsky, a Russian left-wing dissident who was imprisoned for a social media post about alleged election fraud, speaks to Monitor correspondent Fred Weir on Oct. 14, 2021, at a Moscow restaurant.

Until recently a Kremlin-authored system of “managed democracy”–which functions as long as the UR majority remains unchallenged and opposition parties accept their subordinate positions–has maintained a semblance of political legitimacy in the Putin era.

The KPRF, with 150,000 members including 40,000 youths, is Russia’s second-largest party and the only major one with independent historical roots in Russia, while most others have been artificially created by the Kremlin. The KPRF won 19% of the votes in the September election, up about 5% from its previous tally in 2016. By contrast UR, which had been running at around 30% in national preelection polling, won around 49%, about 5% below its previous total.

The KPRF claims it was robbed of several constituency victories–something that has never happened on this scale before, prompting the protests. In Moscow the party tried to organize two public rallies before they were violently dispersed. Both were declared illegal by city authorities.

When the Communist Party’s Duma deputies attempted to hold a public “meeting with voters”–considered an inviolable right–about 180 activists were arrested, including six elected officials. Police laid siege to a building where the party’s lawyers were preparing a legal challenge to election results, nearly preventing them from meeting a filing deadline for their lawsuit.

Nikolai Zubrilin, an elected KPRF deputy of the Moscow city council, has been arrested twice since the election and says the crackdown shows the vulnerability of authorities as more Russians begin to doubt their legitimacy. “Elections in Russia have never been clean,” he says,

The “electronic voting” system was introduced over serious objections by the KPRF and other critics in eight Russian regions, including Moscow, shortly before the race. Authorities say that about 2 million people registered to use the system, but critics say there are no voters’ lists to corroborate that or even any means to trace the votes, much less stage a recount.

Instead of some procedure that can be verified, elections have basically become an act of faith. We have absolutely no means to check the voting patterns.

The KPRF says it has launched about 250 lawsuits in connection with alleged election violations, and a coalition of losing candidates from several opposition parties is pushing for the voting system to be banned for future elections. Moscow election officials say their own investigation found no evidence of fraud, and the results have since been certified.

Mikhail Lobanov was a Duma candidate for Moscow’s Kuntsevo district and supported by the KPRF. He was ahead by 12,000 votes when paper ballots had all been counted on election night. Then 20,000 electronic votes suddenly materialized in favor of his UR opponent, state TV presenter Yevgeny Popov. Mr. Popov won by 8,000 votes.

“Something needs to change”

Mr. Lobanov says the KPRF has been trapped by Kremlin design into a predetermined place within the existing system and, unless it moves more decisively into the streets to stage more convincing forms of peaceful resistance–as happened when millions of Russians protested against election fraud a decade ago–it will lose relevance with Russian voters.

In fact, within the KPRF some members have lamented a too-passive reaction by leader Gennady Zyuganov to the results, and are pushing against their leaders’ “business as usual” relations with authorities.

“If [the party] wants to survive as an opposition force, the KPRF needs to take action to maintain the trust of the people who voted for it,” Mr. Lobanov says.

That’s hard for party functionaries, who are accustomed to getting along with authorities and enjoying the perks of their jobs. But ordinary members, especially the younger ones, are getting more radical. Something needs to change.

Mr. Kagarlitsky says Russian authorities are scared and are intensifying the crackdown against a party they had tolerated for the past two decades because they know Russian history. Top-down, bureaucratic states of the type Mr. Putin has reinvented tend to collapse, often quickly and unexpectedly, he says, as has happened twice in a little over a century–after the fall of the Russian Empire in 1917 and the collapse of the USSR in 1991.

“The Russian public has a very left-wing orientation, so time favors the left,” he says.

The liberal opposition might have been in a position to take full advantage of the Soviet collapse 30 years ago, but they’ve squandered that opportunity. Now the KPRF, for all its flaws and hesitations, is the main repository of left-wing ideas and strong-minded left personalities on our political landscape. No wonder the authorities are reacting in such a terrified manner–much more than seems rational–to the party’s gains in the last election.