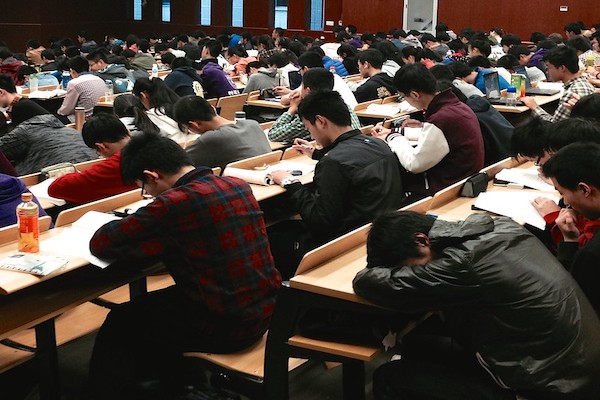 I recently published an article in the American Journal of Economics and Sociology that uses the “student as customer” to help understand why college is so expensive. I explore three factors that contribute to high costs: 1) contemporary understandings of education as a private, rather than a public, good; 2) the ways that schools are funded; and 3) the “marketization” of higher ed. These processes produce students who are customers, but it is important to point out that this change is rooted in a set of neoliberal assumptions that frame the way that we think about, organize, and fund education, rather than any fundamental change in young people.

Neoliberalism is the dominant ideology of this historical moment. It includes a belief in the following: the efficiency of the free market and the deregulation and privatization of the public sector that markets require; tax reduction; abandoning the welfare state; and replacing the notion of the public good with a personal responsibility for one’s own welfare. It has informed public policy in every Democratic and Republican administration since the Reagan years, and it currently structures much of our economic and political lives. This includes the university, where it has shaped institutional practice and individual action.

Neoliberal thought considers higher education a financial investment for students, and it assumes that colleges and universities should compete for customers, just like any other sector. These beliefs have laid the foundation for formal higher educational policy and internal institutional procedure. They have not made the academy more efficient, however, but instead have contributed to the runaway expenses that we see today.

In the United States, ideas about the funding of education turn on whether it is considered a public good; that is, whether the whole community benefits from an educated population, or if it is an investment made by the individual, yielding a return in the form of future earnings. In recent years, the latter vision, that of a private good, has gained ascendancy and this has had a profound impact on financing. It helps explain why so much need-based financial aid takes the form of loans rather than grants, and why public colleges and universities are being systematically defunded.

Moreover, although theorists have long argued that schools reproduce the class system, the victory of the neoliberal agenda has intensified the role of education in solidifying advantage. That colleges and universities survive on those who can pay the bills translates into the structural requirement of privileging the affluent, with the needs of many low and middle-income students ignored.  It also has a profound effect on student behavior as education becomes a commodity to be used for competitive advantage in the labor market, turning students into customers to be pursued.

To attract students in a highly competitive environment, colleges and universities invest in all sorts of things to distinguish themselves from other institutions. The way markets work, however, everyone adopts successful practices, and this means that many very expensive innovations eventually become commonplace. This includes the fancy dorms, dining halls and cutting-edge classrooms so common on campuses these days. Indeed, academia has gone on a multi-decade building spree, often financed by long-term borrowing. Between 2002 and 2012, interest payments almost doubled, growing from  $6 billion to $11 billion for four-year (nonprofit) schools. The University of Colorado, for example, owed approximately $1.5 billion in 2019, with 3.6.% of its annual operating budget going towards debt servicing.

Expanded student services are also common recruitment vehicles, and although they do not typically require large capital outlays, they fuel the growth of administrators. Defined narrowly, about 8.4% of spending in private (nonprofit) four-year institutions and 4.9% for comparable publics is on student services. This contributes to the decline in instructional spending as a percentage of total expenses in both the public and private (non-profit) sectors which, in 2017-2018, accounted for 27% and 31%  of four-year schools’ budgets, respectively.  Add to this nearly a half a billion dollars spent on advertising each year, and the role of competition and marketization in tuition escalation becomes clearer.

Among upper middle-class families, prestige has become the centerpiece of college aspirations. When education is viewed as a vehicle for competitive advantage in a labor market–as a private good–and attending a prestigious school is believed to distinguish one from the large pool of competitors, students pursue prestige as a rational strategy for investment maximization.

Colleges and universities understand this well, and, thus, increasing one’s prestige rankings is a central part of many a recruitment strategy. Indeed, this explains the attention that schools pay to the U. S. New and World Report lists. Attentive institutions have figured out ways to raise their scores and a very common–and expensive–tactic is tuition discounting, where merit scholarships are offered to high achieving customers who would contribute to a school’s selectivity profile. Over time, this practice has spread through academia, so much so that few students now pay full freight. On average, private nonprofits collected  55% of published figures in 2018, with nearly 82% of undergraduates receiving discounts.

Public universities, particularly flagships, use merit aid to recruit academically successful out-of-state students, who contribute to institutional prestige and–theoretically–also counter decreases in state funding by paying higher tuition rates than state residents. But, here again, once everyone has incorporated an innovation, it becomes less effective in distinguishing an institution from its competitors, while the practice remains. Preliminary research  has found this approach is so pervasive, and the competition so intense, that it may lower total tuition revenue, suggesting that state universities have become particularly vulnerable to the market failure of tuition discounting.

Moreover, merit money privileges the wealthy; it has grown at the expense of need-based scholarships and it goes predominately to upper income students, with awards tending to increase with income levels. This has led to decreases in the proportion of low income and minority undergraduates in college in general, with public sector schools especially hard hit.

Neoliberalism, the dominant ideology of this historical moment, has contributed to the rise of the “student as customer” with costly ramifications. The contemporary view of education as a private-good, for example, justifies the massive underfunding of higher education and helps explain why we are transferring its cost from the community to the individual. Given the belief in the power of the market, the non-profit world now follows the logic of the private sector, with colleges and universities developing institutional practices to help survive marketization and privatization. Dependence on students who can afford to pay the bills explains many of the strategies that have been widely adopted, but instead of providing advantage in the competition for revenue, they have created very expensive necessities. This contributes to skyrocketing tuition, while affecting the class and racial/ethnic composition of contemporary campuses. When compared to the conventional wisdom of trust the market, then, the conclusion is that corporatization and marketization are important drivers in tuition cost escalation.

Beth Mintz is a Professor Emeritus of Sociology at the University of Vermont. Her research interests include occupational segregation, corporate structure, gender, and health care.