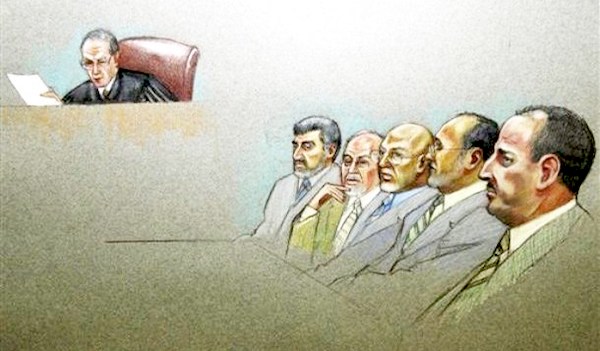 There seem to be few limits to bias and cruelty when it comes to the United States judicial system in the service of political and geopolitical agendas. Communities of color in the U.S. have experienced this cruelty for centuries but for those of us who live outside of that realm, who live in the sphere of the privileged, meeting this cruelty face to face is shocking.

Fifteen years are almost up and two of the five men are up for release. Abdulrahman Odeh is finally at home in Dallas, albeit living with the restriction of a released felon. Mohammad Elmezain was supposed to be released but, because he is not a naturalized citizen of the United States, rather than let him go to his family the authorities “released” him to U.S. Immigrations and Customs Enforcement, also known as ICE.

Once the largest Muslim relief organization in the United States, The Holy Land Foundation (HLF) was shut down after the 9/11 attacks by President George W. Bush via an executive order. After the attacks of 9/11, the U.S. government wanted to show that it was acting swiftly and effectively against terrorism, so the Treasury Department was instructed to find and close down operations that were funding terrorism in the U.S.

In his book “The Price of Loyalty: George W. Bush, the White House, and the Education of Paul O’Neill,” published in 2004, Pulitzer Prize-winning author Ron Suskind describes the post 9/11 atmosphere in Washington as one of “round up the usual suspects.” The Holy Land Foundation, being a Muslim charity with a focus on Palestine, was a prime target.

In addition, since the early 1990’s the Anti-Defamation League (ADL)–which is an anti-Palestinian, Zionist organization–had engaged in a smear campaign against The Holy Land Foundation. Along with American Zionist politicians like Chuck Schumer, Anthony Wiener and others, the ADL was claiming that HLF was funding terrorism.

The smear campaign against HLF was working even before the attacks of September 11, 2001. As the defendants learned during the trial, the FBI had been tapping some of their phones since the 1990’s. Furthermore, the campaign was hurting the relations HLF had with other organizations; and in some cases important alliances had been brought to an end as a result of the false accusations.

On December 4, 2001 the President of the United States declared that he had closed down “a major terrorist funding network,” and the Holy Land Foundation was designated a terrorist organization by the U.S. Department of Treasury. The process of so designating an organization or an individual requires little due process, far less than what is required in a court of law.

In accusing the Holy Land Foundation of funding terrorism, the government has a serious problem. While President Bush rushed to designate them a terrorist organization and declare that closing them down was somehow a great achievement in the fight against terrorism, the fact of the matter was that he had no proof. The officers of the Holy Land Foundation kept impeccable accounts and every penny that went through the organization was accounted for. No money had gone to any terrorist organization, not one penny. Most of what the HLF was giving away was in-kind: they were providing school supplies, food, medicine, along with a relatively small number of school scholarships that were paid directly to educational institutions.

No money or goods ever went from the Holy Land Foundation to any organization that was not recognized and approved by the U.S. government. The groups and organizations with which HLF worked on the ground in Palestine were not only vetted by the CIA, they were also receiving funds and goods from other U.S. and international relief organizations.

In order to make a case that would convince a jury that the HLF was actually supporting terrorism, the U.S. government falsified evidence, presented documents that were wrongly translated, and even allowed two Israeli nationals to testify as expert witnesses anonymously. No one knew who these witnesses really were and whether or not what they were claiming was true. What was obvious through reading the trial transcripts is that the lawyers for the HLF made it clear that these witnesses knew very little and that their claims were untrue.

Mohammad Elmezain, or Abu Ibrahim, was born in a refugee camp near the city of Khan Yunis, which is enclosed within the prison called The Gaza Strip. Born in 1953, he was part of the first generation of Palestinians born as refugees. His family comes from the village of Bashshit, which was destroyed in 1948 by the Israeli army’s Giv’aty Brigade. As did countless Palestinian refugees, he went to a school run by UNRWA, the United Nations Relief and Works Agency for Palestine. He then studied at the prestigious Al-Azhar University in Cairo.

Like many Palestinians, he ended up working in Saudi Arabia and the Gulf states before coming to America in 1983. He immediately went to school and got a masters degree. He lived in New Jersey for a few years, where he served as an Imam, and eventually moved to San Diego where he settled and raised his family. Everywhere he went he was loved and respected by the community. When the indictments came down for the Holy Land Foundation Five, he found himself in the midst of a terrorism case and during the trial he discovered that his phone had been subjected to a wiretap from 1994 until 2003. The FBI agent who testified against him told the court that there were seven thousand pages of summaries made of these phone conversations.

I met Abu Ibrahim in prison twice while he was held at the federal facility in Long Beach, California. I knew he was the elder of the Five, and that he was not in the best of health. However, the man I met was not weak and frail as I had expected, but strong, full of life and determined. I saw a proud man with a strong handshake, who was proud of who he was and proud of the important work that he had done with the Holy Land Foundation.

What the future holds for him is uncertain. It is unclear when or whether the U.S. government will allow him to be united with his family again. What is clear is that the imperatives of U.S.-Israel relations had corrupted not only the political system in the United States but also the judicial system.

Miko Peled is MintPress News contributing writer, published author and human rights activist born in Jerusalem. His latest books are “The General’s Son. Journey of an Israeli in Palestine,” and “Injustice, the Story of the Holy Land Foundation Five.”