Israeli Defense Minister Benny Gantz’s declaration that six Palestinian human rights and civil society groups are “terrorist” organizations aimed at the “destruction” of the country has unleashed fury. “It’s a storm that won’t die down,” Owen Alterman of the Israeli broadcaster i24 News said yesterday. Liberal Zionists have said the designation is “deeply repressive,” and even the Biden administration raised an eyebrow. So now Israel is sending a delegation to Washington to try to prove the absurd/vague charge, which is based on alleged connections between the groups and the Popular Front for the Liberation of Palestine (PFLP).

For much of this year, Israel’s defenders waged a successful battle to keep the word “apartheid” from entering the mainstream American discourse. They have adversaries in the leading human rights groups Human Rights Watch and B’Tselem, both of which issued reports early in the year asserting that Israel practices apartheid, and in young American Jews, nearly 40 percent of whom see Israel as practicing apartheid.

But the Democratic Party establishment and the White House have been adamant against considering the apartheid label. “As to the question of whether Israel’s actions constitute apartheid, that is not the view of this administration,” Biden spokesperson Jen Psaki said after Human Rights Watch’s report came out in April.

Israel’s defenders have also been able to count on the New York Times, which treats the allegation as a smear or an embarrassment.

But the “terrorist” Palestinian human rights groups news forced the Times to credit the apartheid charge. The Times quoted B’Tselem at the end of its news story, before offering an Israeli denial:

B’Tselem, an Israeli rights group, said in a statement: “The current Israeli government is not one of change, but rather of a continuation of the violent apartheid regime.”

The Israeli government denies it runs an apartheid system in the West Bank, and says it is taking steps to improve the lives of Palestinians living in the West Bank and Gaza. 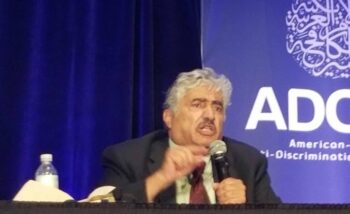 JONATHAN KUTTAB, FOUNDER OF ONE OF THE ORGANIZATIONS CHARGED AS TERRORIST BY ISRAEL, SPEAKING AT THE AMERICAN-ARAB ANTI-DISCRIMINATION COMMITTEE CONFERENCE IN OCT. 2021. PHOTO BY PHIL WEISS.

Jonathan Kuttab, a co-founder of Al Haq, one of the alleged terrorist orgs, which long ago charged Israel with the crime of apartheid, yesterday issued a statement (as the head of FOSNA, Friends of Sabeel North America), noting that the apartheid discourse is advancing.

The fact that Israel is choosing now to attack all six human rights organizations is deeply troubling. It may mean that we are finally becoming effective and successful, that Israel realizes it has lost the public-relations war, and that the world now knows and acknowledges the reality that it is an apartheid state and a systematic violator of human rights and international law. The Defense minister may be afraid that the day is approaching when he and other politicians and army generals may face prosecution before the International Criminal Court for war crimes and crimes against humanity, and he decided to silence these organizations and cripple their activities.

Hagai El-Ad of B’Tselem issued a solidarity statement that repeatedly mentions apartheid, echoing B’Tselem’s report of January calling Israel an “apartheid regime from the river to the sea.”

The Israeli apartheid regime has sweeping powers when it comes to running the lives of its Palestinian subjects. It does not hesitate to use these powers to prevent Palestinians from exposing its actions, from demanding accountability and from lobbying the international community. The regime is now using these powers to try and shut down human rights organizations–yet again citing “classified evidence.” The minister of defense may have signed the order this time, but the responsibility, and the disgrace, lie with the entire government–with every single minister and with all the parties to the coalition.

The apartheid regime’s labeling of award-winning human rights groups as terrorist organizations—just because they speak truths about Israel’s violence & its human impact—is grossly antidemocratic and dangerous.

This is noteworthy because just last month Tlaib called Israel an “apartheid state” during the House debate over added funding for Israel. And party stalwart Rep. Ted Deutch rose to accuse Tlaib of antisemitism because she had “besmirched … the one Jewish state in the world.”

No one defended Tlaib from the vicious charge. While the Democratic Majority for Israel accused Tlaib of seeking the deaths of Jews.

Now the State Department is seeking “clarification” on the Israeli terrorism designation, and JVP Action says the explanation is apartheid:

We can help clarify for you, @SecBlinken: Israel is an authoritarian apartheid regime that systematically silences dissent in order to avoid exposure and accountability. Now that we’ve cleared that up, what are you going to do?

Israel’s defenders like to argue that the “delegitimization” of Israel as a Jewish state is an exhibit of antisemitism. But the terrorism designation reminds us that Israel’s own policies towards Palestinians have been the chief cause of its delegitimization.

Human Rights Watch was moved to launch the investigation that led to its April report calling Israel an apartheid state after Israel passed the “Nation State” Law that gives higher rights to Jews. Also in April, the Carnegie Endowment issued a call for equal rights for Palestinians and Jews because the peace process has failed so miserably, notably to stop the “illegal” settlements program. The same blatant illegality prompted the International Criminal Court to launched a criminal investigation of Israeli settlement in February. Israel’s May assault on Gaza, killing 256 Palestinians, brought angry protests in the U.S., including at Ben & Jerry’s flagship Vermont store, which was said to be a factor in Ben & Jerry’s announcement in July that it would boycott the occupied territories.

Israel’s defenders had hoped the Palestinian issue was dying down since then. The new Israeli Prime Minister has said he wants to “shrink” the conflict, which seems to mean defusing some controversial plans so that the international community stops paying so much attention. His governing coalition includes a (rightwing) Palestinian party and several liberal Zionist members, so the government had been able to sell itself in the U.S. as a step toward democracy and away from the dark days of Netanyahu.

Israel has also sought to bury the Palestinian issue by fear-mongering Iran’s nuclear program or talking up its normalization deals with Arab countries.

Yesterday in Haaretz, the Israeli diplomat Alon Pinkas lamented the fact that Israel has set back that progress by showing intolerance toward Palestinians. Israel is “incapable” of countering the apartheid charge, Pinkas wrote.

What the world has been seeing in the last several months is not only the absence of any political dialogue between Israel and the Palestinians, but dozens of videos daily showing either Israel Defense Forces or settler violence against Palestinians, and settlement expansion … Israel is widely accused of being an apartheid state–or at least employing apartheid policies in the West Bank. This is an egregious argument, but one that Israel seems incapable of countering.

The terrorism designation shows that the Palestinian issue simply won’t go away. Indeed, apartheid is inherent to Israel’s definition of itself as “the Jewish state.” And whether it besmirches Israel or not, it will some day be debated in the U.S.