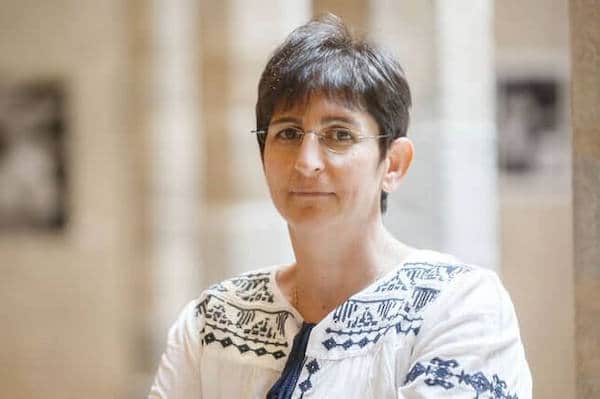 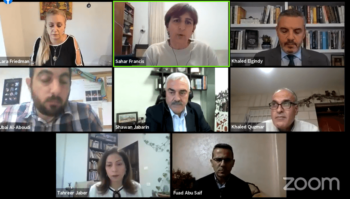 SIX PALESTINIAN HUMAN RIGHTS GROUPS TARGETED BY ISRAELI GOVERNMENT OFFER A WEBINAR ON WHAT THEY DO, SPONSORED BY LEADING WASHINGTON THINKTANKS, OCT. 29, 2021. SCREENSHOT.

The extraordinary webinar on Friday was sponsored by a list of influential American organizations: the Middle East Institute, Foundation for Middle East Peace, Carnegie Endowment for International Peace, Democracy for the Arab World Now (DAWN), Century International, and the International Crisis Group.

“We have 100s of people from all over the world today which is a testimony to the interest in hearing from you, the Palestinian organizations,” Lara Friedman of Foundation for Middle East Peace said at the outset.

Here are some of the statements made by the Palestinian leaders of the targeted organizations.

Khaled Quzmar of Defense for Children International-Palestine, said his group had crossed Israel’s “red lines” when it began giving information to the ICC and to Congress, including Rep. McCollum.

We became a resource for the ICC. This is one of the main reasons. The second is for [our] lobbying inside the Congress… in order to draft laws to deprive Israel of funds for torturing and illegitimate treatment of children… We started to lobby and to have more and more congressman who are supporting our work, and to discuss inside the Congress, Israeli violations. It is considered as crossing red lines. 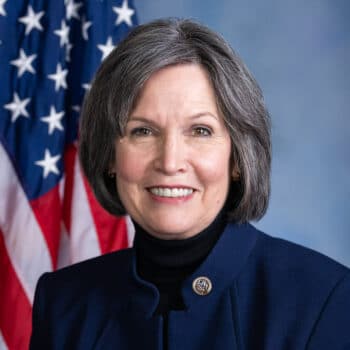 The Israeli backlash has been two-pronged, Quzmar said–first, from its Ministry of Foreign Affairs and Ministry of Strategic Affairs. Then from Israeli rightwing NGOs that seek to smear Palestinian human rights groups as terrorist to an international audience.

We faced since 2014, a campaign of attacks against all DCI partners around our world, even the banks we were working with, every month sometimes if not weekly…

These attacks culminated with a raid on DCIP’s offices in Ramallah last July, confiscating computers and files.

Quzmar said there is no legal basis for the claim that DCIP is linked to terrorist organizations.

We believe there is a political reason behind this decision. We know that because our work in the U.S. and in the ICC– they are trying to silent us or forbidding us from continuing our mission.

Sahar Francis of the prisoners’ rights group Addameer said the groups are being targeted “because we are succeeding.”

We are succeeding in changing the paradigm in the analysis of the international law level, in highlighting that this regime is more an apartheid and colonialist regime, and not just occupation. This is because of the success of the NGOs in the accountability level, especially.. our work versus the International Criminal Court in bringing cases.

Shawan Jabarin of the human rights group Al-Haq also said his organization had “crossed the red line” when it assisted the ICC investigation of Israeli war crimes. Israel tried to dry up Al-Haq’s funding, and failed, and also targeted the group with “Mafia methods,” including death threats.

[When we] go after the commanders and key figures, those who are complicit in war crimes–this is the red line for them. Because all the time they claim that they are the only democracy in this region, but the facts show a completely different story…

They try to shut us down, they try to send fear when they put roses of funerals behind the doors of our colleagues, those who work in the Hague… This is Mafia methods they use…

They failed in their process. They have been contacting our funders and our partners for so long and they have failed to dry up our resources. This [terrorist designation] is the last bullet in their hand and this is a political bullet because it has no legal basis and no security basis… They will not silence us.

Ubai Al-Aboudi of the Bisan Center for Research and Development said that Israel first sought to close the organizations through its military law system. But it was never able to bring “real charges” so it turned to the rightwing NGOs to push spurious claims against the organizations in international fora. Those groups include UK Lawyers for Israel, UN Watch, NGO Monitor, and Regavim.

The right wing organizations… make absolutely ridiculous claims… by the motto, ‘If you repeat the lie enough, people will start believing.’ People didn’t start to believe them. But they start to believe it themselves.

Israel presented its dossiers of secret evidence to EU ambassadors a couple of months ago, Al-Aboudi said.

We began to hear statements from them, there is no evidence and substance to the claims.

“This is state terrorism at its finest hour,” Al-Aboudi said, and described the European rejection of the evidence.

They presented their so-called evidence dossier back in May through the Belgiums. We have a joint program supported through a Belgian NGO by [the Belgian government]… The Belgians did their own investigation. The Belgian minister in charge of international cooperation went in front of parliament said this is propaganda… There is no proof in the file.

Israeli Defense Minister Benny Gantz lately told the Jerusalem Post, We talked to the EU and it refused to stop funding for the organizations, so Israel took this step of designating the organizations as terrorist, Al-Aboudi said.

“Evidence wise they have nothing,” Al-Aboudi said. If Israel had real evidence it would have attacked the organizations. Any independent professional investigation would show that the dossier is based on “libel, propaganda and just lies.”

When we tell them, OK present that [secret evidence], let us have a chance to review the evidence, they say no we won’t do it. This is state terrorism at its finest hour. Our only hope is to rely on the free people of the world to pressure their Congress, their parliament members and to pressure their governments to act and defend human rights.

Sahar Francis said that the so-called evidence was gathered by Israeli security services from the military courts. She said the report was submitted in May to European government.

Most of this information is based on confessions by Palestinian prisoners who are tortured and ill-treated systematically in these interrogation centers… The report–pieces were taken from interrogation sessions, and the confessions of these two prisoners out of five or six prisoners arrested…

Francis represents one of the prisoners, so she has seen the evidence but can’t disclose it due to the military court procedure. But she knows it to be very weak, she said.

Francis said the entire case is a manipulation of anti-terror laws to punish “human rights organizations that are struggling with their people to achieve self determination.” Israel has used these laws for decades to target critics and to advance its annexation of the West Bank and Jerusalem.

She noted that Israel’s “terrorist” designation relies on the claim that the six organizations are tied to the Popular Front for the Liberation of Palestine. But Francis said Israel could have used any Palestinian party for this pretext, including Hamas and Fatah.

Let me remind you that all the parties included in the PLO are still declared illegal in Israeli military orders and inside Israel which means that they can claim against Mr. Mahmoud Abbas himself as the Fatah leader as a criminal terrorist person. They can criminalize everyone and claim based on secret information that he is a terrorist.

Shawan Jabarin of Al-Haq said he has seen the dossier that was given to Europeans and it is laughable.

This is nothing… They try to throw the dust everywhere.

He called on the international community to reject the allegations forcefully.

Jabarin echoed a report in Electronic Intifada saying the EU has shown “deference” to Israel over the allegations.

The E.U.–they didn’t take a strong position. You know why? Because the E.U. is divided. There are also friends of Israel. There are also parliamentarians who receive messages from Tel Aviv not from their capitals even.

“The hope is coming in the U.S. from the new generation, the progressives,” Jabarin said.

Fuad Abu Saif of the Union of Agricultural Workers Committees said that European donors have dismissed the Israeli report but they should speak out.

One encouraging thing… They give the donors all the so-called evidence. But even the donors we had a chat with them, they are not believing what they have in their files. But you have to raise your voice, you have to response to it.

Khaled Elgindy of the Middle East Institute, a sponsor of the discussion, expressed the fear that the international outrage over the Israeli designation would produce “lots of handwringing, a lot of disapproval,” but that in the end the EU and the U.S. will not reject the allegations but acquiesce in them.

Ubai Al-Aboudi noted that he is a U.S. citizen and so are others working for the six organizations.

Khaled Quzmar of DCIP said the secret dossier is a “test” of the Biden administration.

For the Biden administration, this is the test. Are they going to continue with words and no action? It will be no different from the Trump administration. [If there is] no political will to hold Israel responsible for crimes, I conclude that they are partner in the crimes.

Jabarin said that the U.S. should be aware that the case is undermining the Palestinian Authority by closing “all doors” to justice.

He said that Al-Haq’s funders and our partners “are doubling their funding to us. We have no lack of funding, to be honest with you.”

But the big question is whether the U.S. will prevent Palestinians organizations from getting money from banks under the terrorist claim.

Sahar Francis called on the U.S. to pressure Israel now to withdraw the designation.

[The designation] needs to be revoked under political pressure from around the world. It’s the U.S. responsibility. As they support Israel, they can revoke this decision.