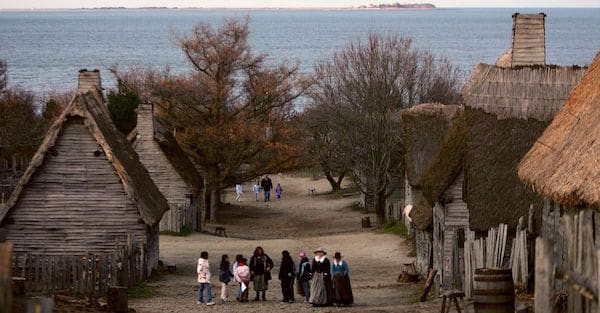 From Columbus Day to Independence Day to Thanksgiving, the U.S. pretty much specializes in taking dates that celebrate genocide and discrimination, and repackaging them as family-friendly holidays. So as Thanksgiving 2021–the 400th anniversary of the supposed first Thanksgiving–approaches, you may be wondering exactly why Thanksgiving is bad.

Not only is Thanksgiving offensive to Indigenous people, but it glorifies colonialism, slavery, and even epidemics. Many Americans who celebrate Thanksgiving have no idea just how cruel the holiday’s origins are, while those who do may choose to either boycott the holiday, or just use it as an excuse to express general gratitude, gather with family, and eat comfort foods.

Here’s a look into the true history of Thanksgiving, and what really went down between the Pilgrims and the Native Americans whose land they stole.

Why is Thanksgiving bad? The history of the holiday students learn is not quite accurate.

In U.S. schools, children are taught that Thanksgiving celebrates a 1621 harvest feast hosted by the Pilgrims (the English colonialists who arrived on the Mayflower), along with their guests, the Wampanoag (a Native American tribe), as facilitated by the bilingual Tisquantum, better known as Squanto, which is what the Pilgrims called him.

The typical curriculum frames this story as one of the Pilgrims struggling to grow food, and the Wampanoag lending them a helping hand on the fields. And while there is evidence that some of those vague details did happen, a lot of details are left out of this sweet story.

“Thanksgiving is rooted in a historical fallacy,” Matika Wilbur, a member of the Tulalip and Swinomish tribes, told TODAY Parents in 2020. “The main Pilgrim narrative coincides with colonization that was inherently oppressive and brutal.”

Here’s the real history of Thanksgiving.

As Smithsonian Magazine puts it, the watered-down version of the story frames the Pilgrims as the protagonists. In actuality, they were the antagonists. For thousands of years before the Pilgrims arrived in the 1610s, the Wampanoag lived in the Americas. They were spread across the areas we now know as Massachusetts and Rhode Island, with a total of 69 different villages, as per Smithsonian Magazine.

Plus, the Pilgrims were not the first colonizers to arrive in the Americas and discriminate against the Wampanoag. As Smithsonian Magazine  explains, for years before the Pilgrims landed, various other English colonizers showed up in the Americas on multiple occasions. Not only did they bring European plagues to the Americas, but many of these men actually kidnapped Native Americans, brought them back to Europe, and sold them as slaves–something that was made easier as more and more Indigenous people got sick from these new diseases.

So when the Pilgrims arrived in the region of Patuxet, which they renamed Plymouth, they thought they had discovered a miracle: the perfect land to steal and build a society upon. The land had arable fields, a spring, and, most importantly, “every single native person who had been living there was a corpse,” due to the plagues brought there by the English, as sociologist and author James W. Loewen explained to The New York Times.

Eventually, the Pilgrims met their neighbors, a tribe of Wampanoag peoples who survived the epidemic that wiped out the Wampanoag members who had lived in Patuxet. Tisquantum, who the Pilgrims called Squanto, is well known as the Native American who served as liaison between the Pilgrims and the Wampanoag, because he spoke English.

But why did he know English? According to Biography, years before, an English colonialist kidnapped Squanto and sold him as a slave in Europe, where he learned the language.

After a few years, he managed to escape and return to the Americas, to discover that his tribe had been killed by the epidemic–a zoonotic disease, according to Slate. (Remember that COVID-19 is a zoonotic disease, as well.) So, Tisquantum joined a neighboring Wampanoag village, eventually becoming the translator between his new tribe and the Pilgrims, as per Slate.

Here’s what happened at the “first Thanksgiving.”

The “first Thanksgiving” that is taught in history textbooks tells the story of the Pilgrims graciously inviting the Wampanoag for a feast as a thank you to the tribe for teaching them about the harvest.

And as explained by Blackfeet Tribe member Gyasi Ross in an essay for MSNBC, the narrative often suggests that the Pilgrims came to the Americas “in good faith,” that they happily hosted the Wampanoag at Thanksgiving, and that they cooked turkey and sweet potato pie for them. However, this is part of the “mythology of white America,” according to Ross.

“[The Pilgrims] could not [bring food to Thanksgiving]. They were broke,” Ross said. “They were begging. They brought nothing of value. But they got fed [by the Wampanoag].” Without the Wampanoag, the Pilgrims would not have survived in America.

According to TIME, there is no clear evidence explaining exactly why the two groups, consisting of about 50 Pilgrims and 90 Wampanoag members, came together. And as Britannica notes, the event was chaotic, filled with liquor, gun shooting, and hunting. 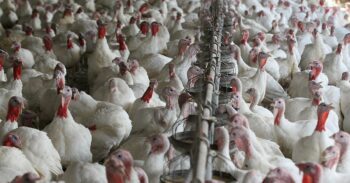 We have turned a story of unjust colonization into an excuse to kill 46 million turkeys every Thanksgiving. (Photo: Green Matters / Getty Images)

Was there turkey at the first Thanksgiving?

There is actually no written evidence that turkeys were eaten at the 1621 Thanksgiving. As The New York Times reports, many experts believe some sort of wild bird, such as ducks, geese, or turkeys were hunted, cooked, and served at the feast, alongside produce.

Every year, Americans breed, kill, and eat around 46 million turkeys on Thanksgiving—and there’s really no reason for this cruel and unsustainable tradition. These days, there are so many vegan turkey alternatives on the market, which are all more compassionate and environmentally-friendly choices.

If you are hosting or attending a Thanksgiving dinner this year, remember the true origins of the holiday–and consider sharing the true story with your friends and family.