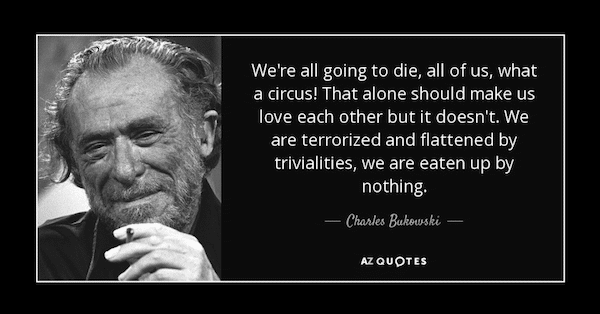 Charles Bukowski has a quote:

We’re all going to die, all of us, what a circus! That alone should make us love each other but it doesn’t. We are terrorized and flattened by trivialities, we are eaten up by nothing.

Terrorized and flattened by trivialities, eaten up by nothing. I think about this quote a lot not just as pertains to the inevitability of our individual deaths, but to the looming death of the entire world.

The website Antiwar.com has been doing a good job keeping track of all the many U.S. cold war escalations against Russia and China, which seem to be coming out on a near-daily basis now. Just right off their front page today there’s a story about how the U.S. considering is putting more military aid in Ukraine on the allegation that Russia is plotting an invasion, another about Moscow claiming that U.S. bombers just practiced a simulated nuclear strike on Russia and have have greatly increased their activity along its border, another about Beijing’s anger over increased U.S. war ship activity in the Taiwan Strait, another about Australian Defense Minister Peter Dutton’s assurance that Australia would join the U.S. in a war against China to defend Taiwan, and yet another about Beijing and Moscow signing an agreement to deepen their military cooperation to counter hostilities from Washington.

Few people seem to believe the most pressing threat to humanity might be all those armageddon weapons we've stockpiled and how increasingly irresponsibly our leaders are treating them.https://t.co/NHYHQgCdfO

This, along with the myriad symptoms our biosphere is showing us of impending collapse, and we still somehow manage to remain terrorized and flattened by trivialities. Eaten up by nothing.

Divisions and hostilities are hotter than ever, even in those political sectors where people are fully aware of just how bad our ecological situation is and the horrifying realities of cold war nuclear brinkmanship. We should rationally all be coming together at this point in history. Our collective plight alone should make us love each other. But instead we’re at each other’s throats more than ever before.

And it’s not just this ideological faction versus that ideological faction. Even among socialists and anti-imperialists there are subfactions, sub-subfactions and sub-sub-subfactions, all of whom despise each other, and all of those divisions are far worse and far more inflamed in online forums. People will spend months on end engaging in online sniping at others over some perceived difference that would be undetectable by someone with a more mainstream perspective, like that episode of Star Trek where a group of aliens who are black on the right side and white on the left are warring with a group whose colors are the opposite and only they notice the difference. Our precious newfound ability as a species to network and share ideas with each other like never before gets bogged down in petty squabbling instead of organization toward a movement into health.

Part of it is information; because the only large-scale distributors of information in our society are controlled and manipulated by the powerful, most people see very little evidence of just how much trouble the systems sustained by the powerful have gotten us into. Part of it is perspective; because most human behavior is driven by ego, a lot more of our interest and attention goes toward the petty differences between ourselves and other humans than large-scale problems which threaten all of us.

So you’ll see even relatively lucid minds spending their time talking about obscure sectarian disagreements, or about the dangers of political “wokeness”, or about the entirely empty theatrics of mainstream electoral politics, even as the destruction of our entire world dangles above our heads suspended by a rapidly eroding thread.