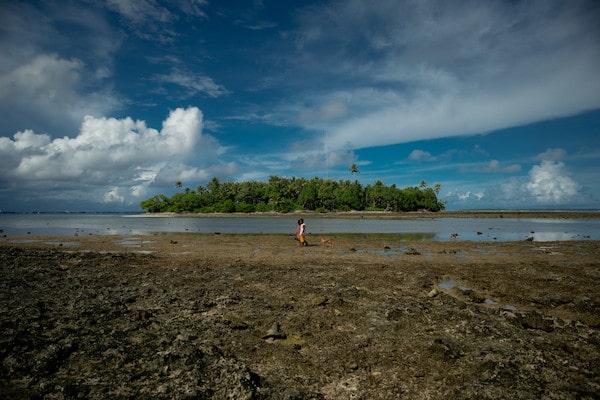 Island state nations like the Marshall Islands are often among the most vulnerable to climate change and need financial support from wealthier countries. (Photo: Asian Development Bank)

SYDNEY and KUALA LUMPUR: Funding for developing countries to address global warming is grossly inadequate. Very little finance is for adaptation to climate change, the urgent need of countries most adversely affected. Also, adaptation needs to be forward-looking rather than only addressing accumulated problems.

The COP26 deal was undoubtedly a “historically shameful dereliction of duty” and “nowhere near enough to avoid climate disaster”. Glasgow’s failure shows up lack of real progress and inadequate policy responses. Worse, no significant new resources came with the “Glasgow Suicide Pact”.

Governments have been advised to reduce vulnerability to shocks by improving data and risk assessment. Most measures to strengthen resilience use conventional financial risk management methods. These seek to better protect existing assets, and to provide temporary financial support when shocks happen.

Relying on past experience, the conventional approach is hardly forward-looking in addressing new challenges. Recommended measures tend to deploy scarce resources to address past and current effects of climate change.

Focussing on current vulnerabilities enables adapting to extant climate threats. This may provide some temporary resilience and relief. But it does not prepare for new threats. Thus, the approach ignores future problems, not providing much protection from or reducing vulnerability to emerging threats.

Counting on pricing and other market techniques for climate adaptation risk assessment is also limiting. The approach tends to focus on what is predictable and incremental, rather than on what is more uncertain and systemic.

With its roots in financial risk management, the approach favours returning to some assumed norms of normality and stability. It thus rejects considering new possibilities, including a more dynamic approach to sustainable transformation.

Furthermore, returning to ‘normal’ for many communities implies exploitation and precarity. Preservation and coping are also favoured by the approach. Typically, these are hardly enough to address the complex challenges faced. Worse, they may inadvertently cause maladaptation.

A transformative approach to climate risk is needed instead. The only lasting solution may be to reduce developing countries’ reliance on climate sensitive activities, such as cattle breeding, through far reaching changes to create more resilient economies.

This requires moving away from de-risking in favour of a more integrated and systemic approach to diversify economies for greater resilience. More diversified economies are more supportive of sustainable development, and much less vulnerable or likely to be disrupted by external shocks.

In recent years, this has been clear from the greater vulnerability of primary export-dependent economies to economic shocks originating elsewhere. But it is also true of climate shocks. Thus, climate adaptation requires a new vision of common goals, instead of merely avoiding risks and worst-case scenarios.

Thus, climate adaptation in the global South needs to be addressed through development. Moving from de-risking to diversification requires a developmental state committed to ‘green’ industrial policy–involving investment and technology–to do so.

Such new transformation strategies must recognize ecological and climate constraints. Developing country policymakers have limited means to address such challenges. With uneven ‘neo-liberal’ globalization, they are also handicapped by institutional weaknesses, e.g., even in mobilizing domestic resources.

Some rich countries–e.g., the UK and Australia–have cut their aid budgets and not deployed their unused Special Drawing Rights to help developing countries. They have done little to encourage private creditors to enable developing countries to invest to develop out of the multiple crises they face.

Thus far, measures for debt relief are very modest and grossly inadequate, “kicking the can down the road”. Deferring debt simply means borrowings are due to be paid later, as compound interest accumulates. Meanwhile, debt burdens continue to grow.

The UNCTAD report warns that measly climate funding is accelerating global warming, undermining prospects for decarbonizing the world. It highlights the need for pro-active multilateralism and support for developing countries to address the climate and pandemic induced crises.

“Global challenges clearly require multilateral responses”. But so far, only the IMF has provided some real relief by cancelling debt service obligations for 28 countries–worth US$727 million–between April 2020 and October 2021.