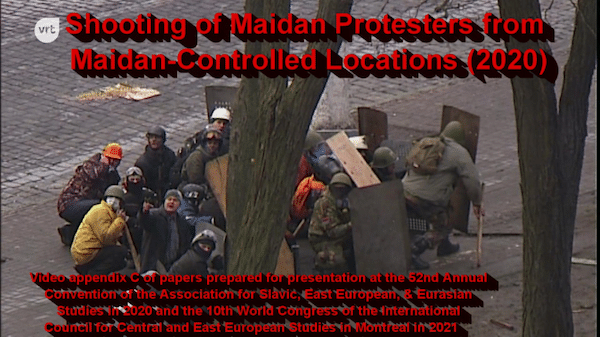 My paper and several video compilations presented recently at the virtual 10th World Congress of the International Council for Central and East European Studies in Montreal examined evidence revealed by the ongoing trial and government investigation into the Maidan massacre in Ukraine. This massacre of protesters and police during the Euromaidan mass protests on February 20, 2014 not only constituted a major crime and human rights violation, but also contributed to a cascading series of events. These included the overthrow of the Ukrainian government, the start of the civil war in Donbas, Russian military interventions in Crimea and Donbas, the Russian annexation of Crimea, and, ultimately, major and protracted conflicts between Ukraine and Russia, on the one hand, and Russia and the West, on the other. The Maidan massacre trial and investigation produced overwhelming evidence that Maidan protesters were massacred by snipers at Maidan-controlled buildings, rather than by government snipers or Berkut policemen—who were nevertheless charged with the crime. 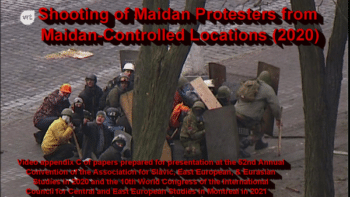 The evidence includes videos, testimonies by over 100 wounded protesters, several dozen prosecution witnesses, and forensic ballistic and medical examinations by government experts. With some exceptions, these revelations were not reported by the Ukrainian or Western media, which from the start blamed government snipers and the Berkut police for killing Maidan protesters, allegedly on the orders of then-President Yanukovych. My study analyzed several hundred hours of video recordings of the Maidan massacre trial, which is streamed on YouTube. 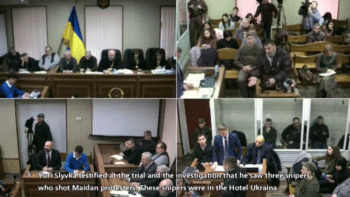 Even the government investigation determined, based on their testimonies and investigative experiments, that almost half, 77 out of 157 protesters, were not wounded from Berkut positions, and did not charge anyone with their shooting. The evidence suggests that they were shot from Maidan-controlled areas. Indeed, both videos and testimony by the commanders of government sniper and counter-sniper units revealed that that government snipers arrived when nearly all the victims had already been killed. A minority of wounded protesters testified at the trial or at the investigation that they were shot by government snipers or Berkut police. But most of these testimonies are not consistent with their wound directions in forensic medical examinations, or their positions in videos.

The prosecution, and recently the Maidan massacre trial, refused to classify a Maidan female medic as a victim in the trial of the Berkut policemen. She was turned into a Maidan “icon” after tweeting that she was dying shortly after she was filmed on the Maidan running to an ambulance with blood on her clothes. She testified as a witness in this trial that she was wounded from the direction of the Maidan-controlled Hotel Ukraina based on her reported entry and exit wounds in the neck.

However, she admitted in an interview with a Ukrainian journalist that she was not wounded. This Ukrainian journalist reported that a Maidan activist revealed to him that the wounding of this Maidan medic was staged by the Maidan Self-Defense leadership and that she misrepresented wounds from a recent surgery as sustained during protests. After six years, a Ukrainian police investigation determined, based on confessions by fellow activists and findings by forensic medical experts, that her “crucifixion” and “torture” wounds were made in sterile conditions. These investigators also found that the highly publicized kidnapping and crucifixion of another Maidan activist was staged.

Dozens of members and commanders from government sniper units testified at the trial as prosecution witnesses. Yet their testimony showed that their units were ordered to deploy to government-controlled areas near the Maidan in order to locate and neutralize snipers, who in turn killed or wounded the Berkut policemen. They testified that, after their arrival, mass shooting practically stopped, yet that they came under fire from Maidan-controlled buildings.

The government investigation had earlier determined that Yanukovych government snipers could be held responsible for the death of only a single Maidan protester. Meanwhile, two other demonstrators who had been nearby during his killing, testified that he, too, was shot from a Maidan-controlled building. Photos and forensic examinations by government experts revealed that he was shot in the back from a steep angle by a corroded bullet as he faced the government positions.

Yet despite the overwhelming evidence, the investigation ultimately denied that there were snipers in Maidan-controlled buildings. It is striking that, almost eight years after one of the best-documented cases of mass murder in history, nobody is convicted or under arrest for the Maidan massacre.

Ivan Katchanovski teaches at the School of Political Studies at the University of Ottawa.