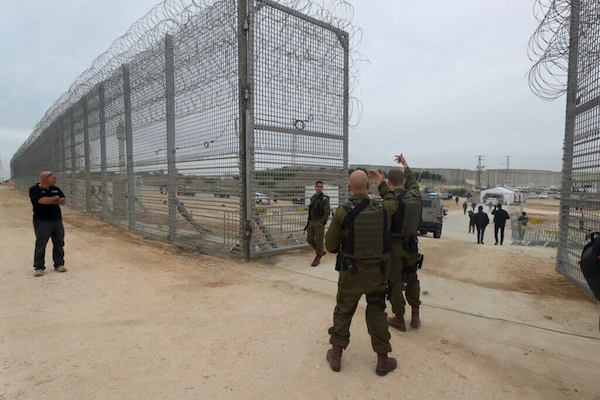 Merriam-Webster dictionary defines a concentration camp as “a place where large numbers of people (such as prisoners of war, political prisoners, refugees, or the members of an ethnic or religious minority) are detained or confined under armed guard—used especially in reference to camps created by the Nazis in World War II for the internment and persecution of Jews and other prisoners.” And a death camp is “a concentration camp in which large numbers of prisoners are systematically killed!”

The Gaza Strip, occupied and besieged by apartheid Israel, has been transformed into both; the difference is that it is larger than all known concentration and death camps created by the bigoted Western regimes in the 20th Century. Israel’s decision to redeploy its troops around the densely-populated coastal strip in 2005, and then impose an unprecedented, medieval siege in 2006 that has shattered all spheres of life, and then carry out four massive attacks that have killed more than four thousand civilians, including women and children, does not seem to be enough for the ruling Zionist elites of the rogue state.

Two days ago, it announced the completion of a sensor-equipped underground wall around Gaza which includes hundreds of cameras, radar and other sensors, and spans 65km. It was reported that the wall is more than six meters high and its maritime barrier includes electronic devices to detect infiltration by sea and a remote-controlled weapons system. The ministry did not disclose the depth of the underground wall. It took three and a half years to complete. 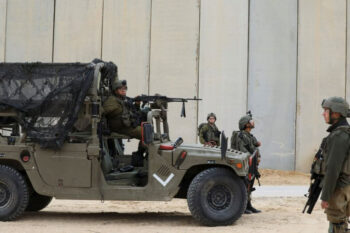 Not a single mainstream media outlet used the term “concentration camp,” or even apartheid in reference to the ongoing siege of the Gaza Strip. The language used by the Israeli Occupation Forces has become the reference–no questions asked. No Gazan/Palestinian voice is permitted to say a word about the impact of this “project” on their lives. What we get to read is the statement made by Israeli war criminal, Defense Minister Benny Gantz, namely that “[t]he barrier, which is an innovative and technologically advanced project, deprives Hamas of one of the capabilities it tried to develop,” and that “[it ]places an ‘iron wall’, sensors and concrete between the terror organization and the residents of Israel’s south.” PERIOD! No questions asked!

The two million residents of the Gaza Strip have to be imprisoned inside this concentration camp because they are all “Hamas supporters,” and that gives “us” the right to use a “smart wall” to encircle “them.” That is not a form of “collective punishment” only because “they” are not born to Jewish mothers, and, therefore, they do not have the “right” to be treated as full human beings. Only those with white skin and/or born to Jewish families can have that right.

Apartheid South Africa and the American South under Jim Crow Laws must have been a picnic compared to this.

The two million residents of besieged Gaza, the overwhelming majority of whom are refugees who were violently expelled and dispossessed from their homes by Zionist forces in 1948, were subjected to four weeks (2009), 2 weeks (2012), 51 days (2014), and 11 days (May, 2021) of relentless Israeli state terror, whereby Israeli warplanes systematically targeted civilian areas, reduced whole neighborhoods and vital civilian infrastructure to rubble and destroyed scores of schools, including several run by the United Nations Relief and Works Agency for Palestine Refugees in the Near East (UNRWA), where civilians were taking shelter. This came after years of an ongoing, crippling, deadly medieval Israeli siege of Gaza, a severe form of collective punishment. But why are “they” not satisfied with what “we,” supported by the complicit West and “friendly” Arab regimes, are offering them? (Forget about The Fourth Geneva Convention of 1949, ratified by “us”, i.e., Israel, banning collective punishment of a civilian population.) 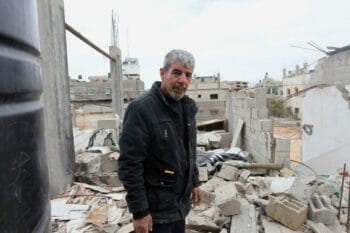 THE OWNER OF A HOME DESTROYED BY AN ISRAELI AIRSTRIKE IN MAY 2021 STANDS IN THEIR HOME IN BEIT HANOUN IN THE NORTHERN OF GAZA STRIP ON DECEMBER 9, 2021. OWNERS OF HOUSES PARTIALLY OR TOTALLY DESTROYED DURING THE MAY WAR ON GAZA ARE GROWING CONCERNED ABOUT THE DELAYED RECONSTRUCTION. (PHOTO: YOUSSEF ABU WATFA/APA IMAGES)

Never before has a population been denied the basic requirements for survival as a deliberate policy of colonization, occupation and apartheid, but this is what Israel is doing to the people of Gaza, today: two million people live without a secure supply of water, food, electricity, medicines, with almost half of them being children under the age of 15.

And now we have to deal with the fact that we are literally inmates of the largest concentration camp on earth with no rights whatsoever. President Carter was not exaggerating when he visited Gaza in 2009: “[Palestinians in the Gaza Strip] are being treated more like animals than human beings… [n]ever before in history has a large community like this been savaged by bombs and missiles and then been deprived of the means to repair itself.”

Alas, Carter is no longer the president of the USA, the strategic ally of apartheid Israel. As long as world official bodies and leaders choose to say and do absolutely nothing, Israel will go on killing more Palestinians, building higher walls, tightening the siege, and will claim it is all done in “self defense!”

And yet, we, ungrateful “antisemites,” are being blamed for calling it a “concentration camp!”

Haidar Eid is Associate Professor of Postcolonial and Postmodern Literature at Gaza’s al-Aqsa University. He has written widely on the Arab-Israeli conflict, including articles published at Znet, Electronic Intifada, Palestine Chronicle, and Open Democracy. He has published papers on cultural Studies and literature in a number of journals, including Nebula, Journal of American Studies in Turkey, Cultural Logic, and the Journal of Comparative Literature.