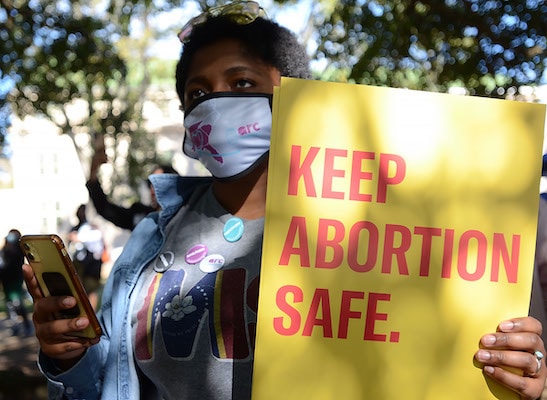 A pro-abortion rally participant shows her support for a woman’s right to choose at Smith Park in Jackson, Wednesday, December 1, 2021.

Democrats have been fooled into thinking that only the courts can protect abortion rights. In fact, legislation could protect abortion permanently, but their party has refused to do that. Now that SCOTUS control is lost because of their corruption and betrayals, they continue to spin lies that bamboozle the party faithful.

“ What about the Supreme Court?” Those words are used to thwart any discussion which questions support for the Democratic Party. The democrats maintain their hold on voters who would otherwise be rid of them by dredging up the fear of the federal judiciary falling under Republican Party control. The legal right to abortion is one of the issues used to keep millions of people from leaving the democrats once and for all.

After decades of democrats’ corruption, inaction, and lies, the right to abortion is indeed at risk. The majority of Supreme Court justices are republican appointees. They may uphold a Mississippi law which severely restricts abortion access or even overturn the 1973 Roe v. Wade decision which declared a constitutional right to abortion. The boogeyman of right wing judicial control is now real and the democrats have only themselves to blame. Unfortunately, most of their voters still go along with their faux outrage when they should be questioning the whole rotten apparatus.

The democratic party is called a “big tent” which includes corporate interests, wealthy funders, well funded think tanks, elite academia, and left leaning voters. Black people are the constituency they depend upon the most, although one would never know that by looking at the policies the democrats hold near and dear.

Black voters in particular are caught in a trap, seeing themselves as powerless to do anything except keep republicans out of office. The openly white supremacist nature of the republicans is not met with any opposition by the party that fails to fight for them. Instead fear mongering and betrayal of their most loyal voters are their favorite means of getting support. The political duopoly are like fake heroes and fake villains in professional wrestling. The differences are all for show.

The bloom was off the rose in 2016 after the hope and change promised by Barack Obama was revealed to be nothing more than neo-liberal business as usual. Many democrats were disgusted when the primaries were rigged against Bernie Sanders. Hillary Clinton’s “pied piper strategy” amplified Donald Trump, and the combination of miscalculation and hubris gave him the electoral college votes needed to win and to make lifetime judicial appointments.

Hillary Clinton was so sure she would defeat Trump that she chose senator Tim Kaine as her running mate. Kaine is one who straddles the fence claiming he is personally opposed to abortion because he is a Catholic while claiming he would defend Roe v. Wade. Clinton herself foolishly sought to portray herself as being ambivalent about abortion, thinking she would get support from some conservative voters. Of course real conservatives were in love with Donald Trump. So-called moderate republicans voted for him too. Hillary’s efforts to be as slick as Bill Clinton were laughable and her sad attempt at Clintonian triangulation led to Trump’s victory.

Democrats don’t like to mention that Ruth Bader Ginsburg should have stepped down when Barack Obama asked her. He also didn’t fight for his nominee Merrick Garland because he assumed that a president Hillary Clinton would have her choices. The miscalculations are guarded like a shameful family secret lest left leaning democrats question the cult leadership and head for the exits.

Of course the constant demand that leftists stick with the democrats over the issue of abortion falls apart upon even cursory examination. House Speaker Nancy Pelosi was taken to task in 2017 for saying that abortion was “fading” as an issue of concern to her party’s members. In 2018 when democratic voters were urged to give control of the House to democrats and diminish Donald Trump’s power she said abortion was not a litmus test issue. While voters are harangued to stay with the democrats as if they are a political lifeboat, the leadership make clear that they don’t care what their constituents want and only raise issues at opportune moments to raise money and keep the rank and file in line.

Democrats are only serious about neo-liberal austerity, protection of corporate interests, and carrying out imperialism abroad. Everything else is propaganda meant to convince the gullible to stay in their camp. Liberals think themselves superior and sneer at white republicans for voting against their interests. They are no better, allowing themselves to be fooled again and again by SCOTUS fear mongering when their party could protect abortion rights with legislation if they really wanted to do so.

The joke is on liberals who want to relitigate the 2016 debacle by blaming everyone but the people who should have won the election they said was so important. The barbarians are not just at the gate, they have breached the walls and the democrats are responsible. But even as they fail in the electoral arena,
their propaganda knows no bounds. They never discuss legislating abortion rights and their constituents never take them to task.

MAGA hat wearing Trump supporters are no more indoctrinated than the average democrat voter. The discredited leadership exemplified by the likes of Nancy Pelosi have a strong hold on their members despite failing them time and again. The only sure prediction of the 2024 presidential campaign is that the need to control the federal judiciary will again be trotted out to end any questions or hesitation to support the party that fails its people so often.

Democrats have been fooled into thinking that only the courts can protect abortion rights. In fact, legislation could protect abortion permanently, but their party has refused to do that. Now that SCOTUS control is lost because of their corruption and betrayals, they continue to spin lies that bamboozle the party faithful.