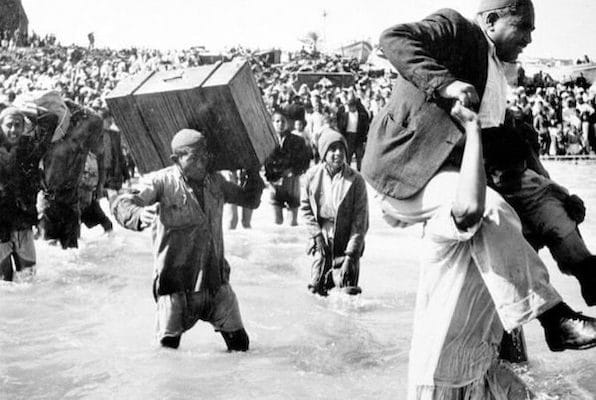 Palestinian refugees were forced by Zionist militias to flee their homes during the ‘Nakba’ – The Catastrophe – of 1948. (Photo: via UNRWA)

Israeli government discussions on the massacres perpetrated by Israeli soldiers in 1948 were declassified for the first time this week in an investigative report published by the Israeli newspaper Haaretz and the Akevot Institute for Israeli-Palestinian Conflict Research.

Entitled, ‘Classified Docs Reveal Massacres of Palestinians in ’48–and What Israeli Leaders Knew’, the report exposes two large-scale operations launched by the Israeli army in October 1948, one based in the south, known as Operation Yoav, which opened a road to the Negev; and another in the north, Operation Hiram.

“Within less than three days, the IDF [army] had conquered the Galilee and also extended its reach into villages in southern Lebanon. The overwhelming majority of them took no part in the fighting,” reported Haaretz.

The investigation also revealed accounts regarding previously unknown massacres that took place in the villages of Al-Reineh, just north of Nazareth, Meron and in Al-Burj.

Before the brutal attacks against Palestinians during Operation Hiram, the village of Al-Burj, presently known as Modi’in Illit–a large ultra-Orthodox settlement in the occupied West Bank–was raided in July 1948.

The current state of Israel was built on the back of mass expulsion, massacres, and war crimes against Palestinians.

Can’t imagine why the Israeli government continues to censor and prevent the release of further documents. https://t.co/cgBvYL5aDK

According to a document found in the Yad Yaari Archive, four elderly men remained in the village after its capture.

Hajj Ibrahim, who helped out in the military kitchen, a sick elderly woman and another elderly man and elderly woman.

Eight days after the village was raided by Israeli occupation forces, Ibrahim was sent on an errand to pick vegetables by an Israeli soldier, in order to keep him away from the atrocity, the soldiers were ready to commit.

“The three others were taken to an isolated house. Afterward an anti-tank shell was fired. When the shell missed the target, six hand grenades were thrown into the house. They killed an elderly man and woman, and the elderly woman was put to death with a firearm,” according to the document.

It is the year in which the Palestinian people were expelled from their home and land and lost their homeland in favor of the establishment of the state – Israel. ++

“Afterward they torched the house and burned the three bodies. When Hajj Ibrahim returned with his guard, he was told that the three others had been sent to the hospital in Ramallah. Apparently he didn’t believe the story, and a few hours later he too was put to death, with four bullets,” added the document.

The declassified State Archives also consist of several pages of minutes from those years, including the testimony of Shmuel Mikunis, a member of the Provisional State Council (predecessor to the Knesset) from the Communist Party, who reported on the atrocities perpetrated in the Meron region.

The declassified documents, investigated in Haaretz’s report also includes details on the Hula massacre in Lebanon and the depopulated Palestinian village of Deir Yassin. Though the report is lengthy, the paper highlights that many more details remain unknown.