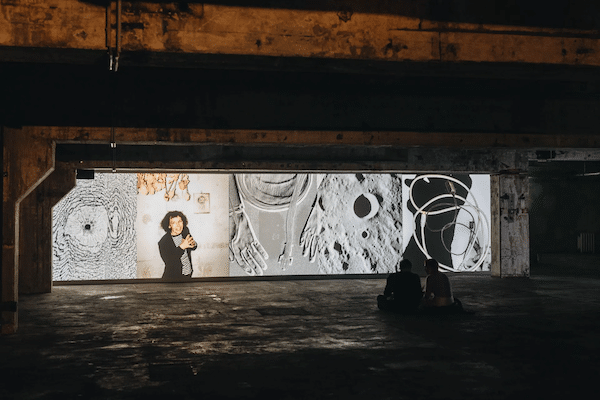 In this article, we cover the Metabolic Rift exhibition tour, a reimagined version of the iconic experimental music festival, Berlin Atonal.

In 2020, we were forced to put our lives on pause. Countries were divided from one another; communication between people moved to the more diluted online space. The schedules of jet setters across the world became completely blank, and one German artist passionate about the environment went as far as to say they’d never fly again. Coronavirus pushed the reset button on our lives, and as we gradually return to normalcy, we’re realizing that our lives will never be the same as before the pandemic.

But the days of feeling dejected are long gone. People, cities, and the underground scene have sprung back to action. But this moment is not merely a celebration of the scene’s revival. It’s a moment that brings to light the indomitable spirit of culture, one that has been lying dormant somewhere in the depths. It’s as if this revival was the reason the silence lasted for over a year.

Metabolic Rift, a reimagined version of the iconic experimental musical festival Berlin Atonal, is the Berlin underground culture that the world needs to see right now. In this series, we will feature this project, which was divided into an exhibition tour and live performances. 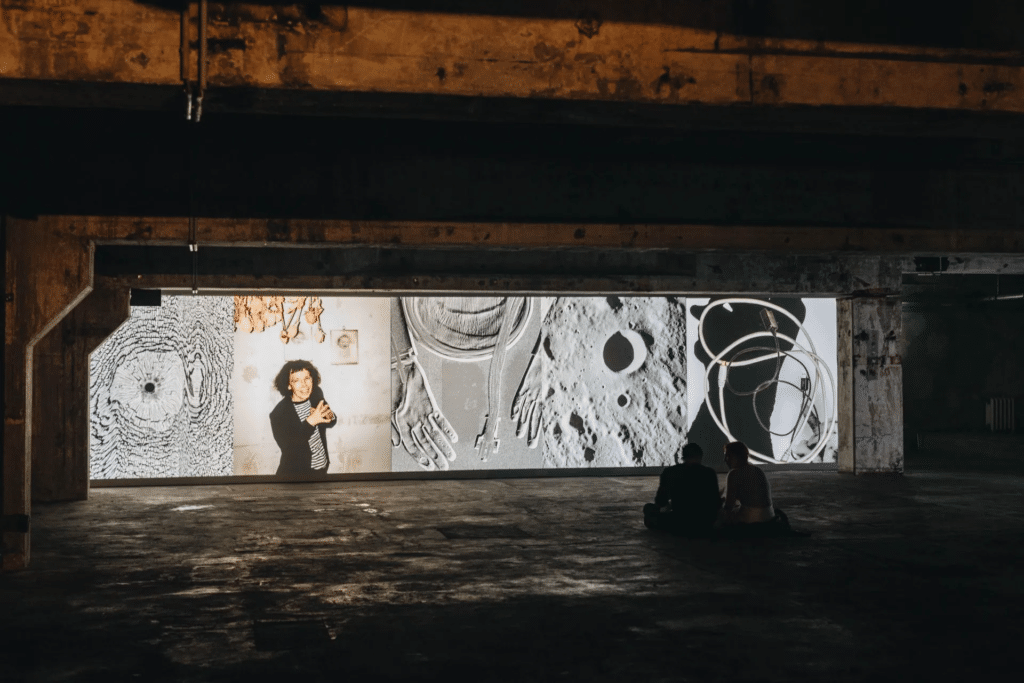 Humans live from nature, ie: nature is our body, and we must maintain a continuing dialogue with it if we are not to die.
To say that humanity’s physical and mental life is linked to nature simply means that nature is linked to itself, for humans are part of nature.

Metabolic Rift expresses the state of culture in the new age

Berlin Atonal is an internationally-renowned experimental music festival held annually over five days at the end of August at Kraftwerk, Tresor, and OHM. On top of premiering collaborations between the world’s top artists, the festival provides an overwhelming, one-of-a-kind experience: Noises and beats echo within Kraftwerk’s industrial space and trippy films are projected on a massive screen.

Atonal originally started in 1982, and after being put on hold in 1991, it was revived in 2012 before inevitably having to cancel in 2020. One could say that even before the pandemic, this festival has had a rocky history. Just once during the lockdown, I visited Köpenickerstr, the street where the three venues are located. I was there to write an article about the state of the neighborhood at the time, but I found nothing but gloom and despair in this gray world with its heavy shutters still closed.

But Metabolic Rift, which took place over the extended period of September 25th to October 30th, carried out a complete revival and revolution. The title of the exhibition, derived from philosopher Karl Marx’s Das Kapital, brings up various themes: the overgrowth of capitalism, the human need to coexist with nature, and what culture should look like in the new era. What messages did the participating artists incorporate into their work?

With a completely different approach from before, this experiential exhibition tour was a universe that seemed like an embodiment of the subconscious, extending far beyond our imagination.

Tresor, an iconic techno institution that I thought I knew like the back of my hand, had been transformed into a portal to a parallel world, one that no one had ever seen before. As we walked nervously through the darkness, relying only on the faint light, we found ourselves in front of a DJ booth. There, blocks of ice were lit up by a spotlight, melting in a surreal manner. The moment I spotted this work by Chinese artist Pan Daijing marked the beginning of Atonal’s very bizarre tricks.

The tour guides who accompanied the tour group provided no explanations. We could only see, hear, and listen for ourselves. The works were displayed in normally inaccessible hallways or backyards that I had never known existed, and as I moved through the space, I was impressed with the level of detail and surprise from start to finish. Moving further, I found myself in a maze, completely lost. This must have been part of Atonal’s tricks. As I pondered this and continued to walk forward, I suddenly saw a huge sky dancer dancing wildly before me. 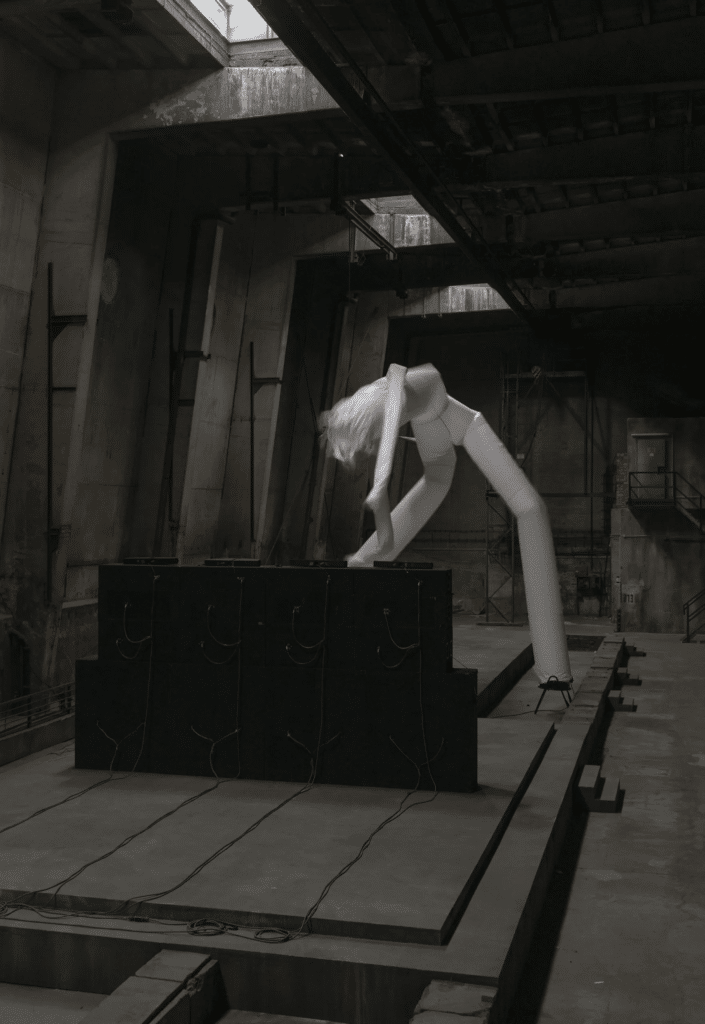 The installation by French artist Cyprien Gaillard and Chicago-based artist Jamal Moss (aka Hieroglyphic Being) is a kinetic art piece. In place of the people who lost their opportunity to dance at clubs and festivals is an artificial, vinyl doll. Powerful gusts of air move the doll to dance in front of the legendary Killasan sound system before it silently shrivels up. This series of movements made me feel sorrow, while the power of the woofer sprawling across the floor made me intensely yearn for the dance floor.

In the main hall of Kraftwerk was a rap video by Armand Hammer, a leading group in New York’s underground rap scene. Created by the Alchemist and Joseph Mault, this multi-channel video installation featured giant screens in every direction, each playing a different video. We leaned back on the beaded cushions spread out across the floor and let ourselves be immersed.

The most interesting part of the exhibition and my personal favorite was the large-scale installation by Daniel Lie, which was displayed on the ground floor. Large curtain-like cloths were hung from the ceiling, crossing over spaces where old-fashioned vases were placed. The beautiful posts, covered with fresh flowers, were an overwhelming presence, and the piece made use of many natural elements that have been essential to humans since ancient times, such as soil, grains, and seeds. The water flowing throughout felt like a soothing oasis amid a decaying brown world and the cold atmosphere of reinforced concrete. 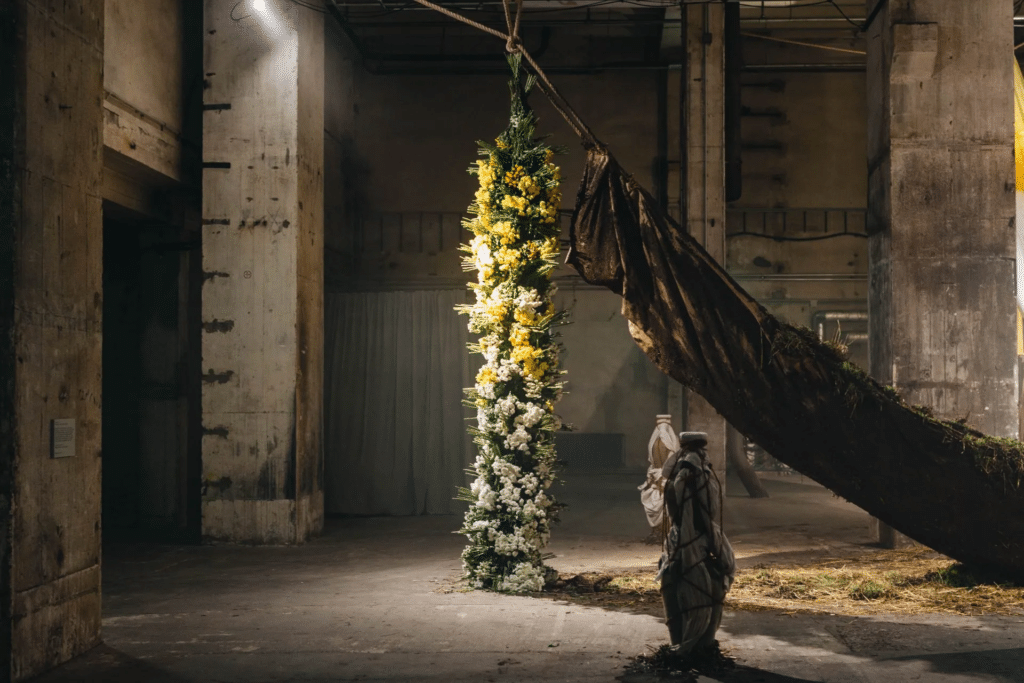 Hiroō Tanaka, a video creator who was involved in the production of Lillian F. Schwartz’s video, talks about the Metabolic lift

Metabolic Rift is a concept inspired by Marx’s ideas. This exhibition takes visitors from the building’s basement, which used to supply electricity, all the way up 18 floors to the attic. I was told that this is like a metabolic system that changes the way visitors think about art.

Lillian’s work was a video piece placed deep within the basement, at the final point of the underground tour. Lillian is a video artist who has been active since the 1970s. She’s legendary for her experimental style, and her work appeared everywhere back when I was studying art at a graduate school in the UK. She later became partially blind, but she continued making art with the help of her son, Laurens. Using crayons and magic markers, she relies on her hands and colors to draw faces. My job this time was to edit those faces and apply effects.

The drawings seemed quite random at first, but the eyes and parts of the face were arranged on the paper using an X-Y axis, which is a rule of film that she developed over the years. When I edited the drawings according to the numbering system, I was continuously surprised to find that there were moments when it seemed as if the eyes were blinking.

At a time when the evolution of technology is changing the world of CG art, it felt sacrilege to use a computer to put new effects on a work that was a return to the roots of CG art. But Lillian and Laurens were always open in our email correspondence, and that attitude really helped me.

Laurens really inspired me with his creative philosophy and understanding of the structure of the human eye as well as the world’s perception of art. I can only say that it was an honor to be reunited years later with the person I studied as a student. So personally, I strangely felt like it was a fate that the concept of Metabolic Rift allowed me to return to my creative roots, and that this all took place in the year 2021 when the world and its people are about to undergo major changes. 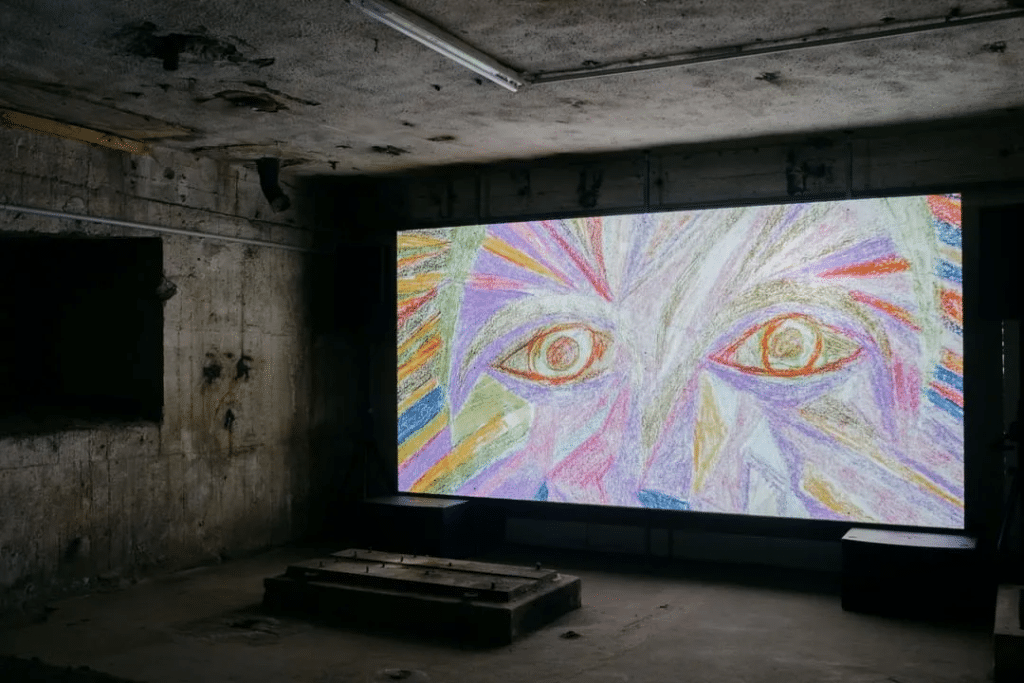 Lillian’s drawings, created with only 20% of her eyesight remaining in one eye and the help of her son, were a subliminal universe that mixed psychedelics and innocence, all sucked deep into a concrete cave.

In the next installment, I’ll report on the live performance that featured Canadian experimental composer Tim Hecker.

Kana Miyazawa, born in Nagano Prefecture. Graduated from Bunka Fashion College. After working as a press officer and brand director for a select shop, She worked as a freelance PR. Since 2012, She has built up a unique style based on the two pillars of fashion and music. She started writing as a writer, covering European music festivals and local culture. In 2014, She moved base of operations from Tokyo to Berlin. She is currently working with Qetic, VOGUE, Senken Shinbun, WWD Beauty and ELEMINIST. She is currently writing for many fashion and culture magazines such as mixmag. She will return to the PR business completely in 2019, working with domestic and international fashion brands and music labels She is also involved in the following. She also makes irregular appearances on J-WAVE’s “SONAR MUSIC”.