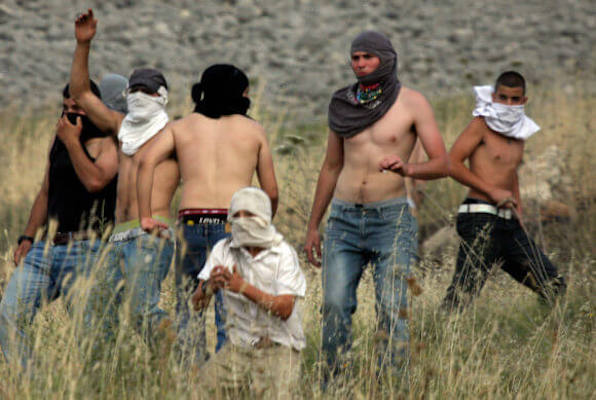 ISRAELI SETTLERS FROM THE JEWISH SETTLEMENT OF YITZHAR THROW STONES DURING CLASHES WITH PALESTINIANS FROM THE VILLAGE OF ASIRA AL-QIBILIYA, SOUTH OF THE NORTHERN WEST BANK CITY OF NABLUS ON MAY 19, 2012. (PHOTO: WAGDI ESHTAYAH/APA IMAGES)

From now on, Israel Defense Force militants may fire on Palestinians who have thrown stones or firebombs even when they no longer pose any danger. Or, in the IDF parlance, when they’re escaping. These changes in the IDF’s Rules of Engagement (RoE) were exposed by Roee Sharon of Channel 13 on Sunday (Hebrew). This change requires three comments.

First of all, the timing. Sharon notes that the RoE were changed within the last few weeks–but the IDF allowed the publishing of the information only on Sunday. Why? Because of the crisis in the illegal outpost of Homesh, situated on the land of the village of Burqa, near Nablus. Following the killing of a settler, Yehuda Dimentman, and a wave of settler violence, hundreds of settlers attempted to reach the outpost, and clashed with the army, wounding one soldier by running him over (Hebrew).

The army knows it will likely have to remove the outpost soon, so it bribes the settlers: Here, you see, we made shooting Palestinians easier!

The IDF has a record of allowing the injuring of Palestinians in order to mollify settlers. In 2015, then-Brigadier General Tamir Yadai, then the commander of the AYOSH Division (West bank, but he’s been promoted since) told (Hebrew) the settlers of Halamish that he changed the RoE, saying:

We’ve been a bit tougher with the people around here. Where we used to fire gas grenades or rubber [coated bullets], we now shoot Ruger [bullets] or live fire.

Contrary to what Yadai implied, the Ruger 0.22 fires rounds which, while less powerful than normal ammunition, are still very much lethal. Note that it was to settlers, Yadai’s true clientele, that he announced the order for the use of excessive force–so as to mollify them.

Secondly, the use of excessive force, when you know it’s excessive, is a war crime. Shooting an escaping, unarmed, person who poses no threat to you is a war crime. These war crimes are committed essentially for public relation purposes. The IDF returns to the RoE it used in Operation Doorstep Keepers, the massacre on the Gaza border in 2018-2019 during the Great March of Return. Those RoE were changed quietly afterwards, because they caused the IDF public relations damage.

But now it’s time to bribe the settlers again; the IDF has become inured to committing war crimes; and it knows no one in Israel will complain, and that if it kills children who threw stones and escaped, the Israeli media will simply not report it, or at worse will run the IDF’s Spokesman daily lie. So what’s to lose?

And thirdly, the elephant in the room: While the official RoE does not discriminate between Jewish and Palestinian stone-throwers, the rules on the ground certainly do. No IDF militant will shoot to injure, much less kill, Jewish stone throwers. A soldier will not use live ammo, Ruger bullets, rubber-coated bullets, CS grenades, or stun grenades against Jews.

He will not do so if even if the Jewish rioters personally attack him, run him over. Not only will he not shoot at them, he will not even detain them.

Stones thrown by Jews are as damaging as stones thrown by Palestinians, but the procedures–and how can that be otherwise, in an Apartheid regime?–change according to the ethnic origin of the stone thrower. And the Israeli public grows inured to that, day by day.