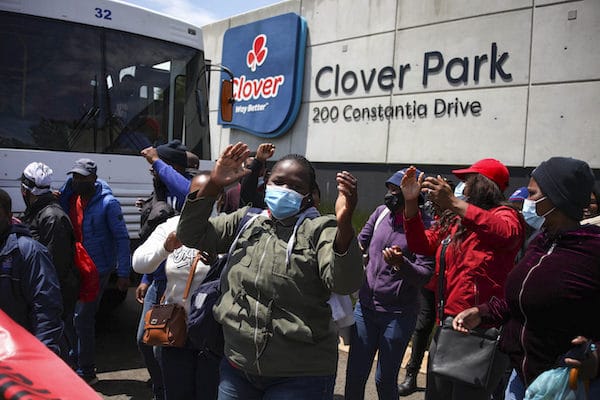 Members of FAWU, GIWUSA and ITU together with members of civil society demostrating at the Clover SA head offices at Constantia Kloof, Roodekop as the strike intensified. 02/12/2021 (Photo: Oupa Nkosi)

Pressure is mounting on the government to nationalise dairy giant Clover, to prevent it from potentially becoming a distribution agency for Israeli dairy products.

About 4 000 workers who belong to the General Industries Workers Union of South Africa (Giwusa) and the Food and Allied Workers Union (Fawu) have been on strike against the majority Israeli-owned company since 22 November.

Clover was established in 1898 but Milco, a subsidiary of the Israeli Central Bottling Company (CBC), bought 60% of Clover in 2019 with the approval of the South African government and the Competition Commission.

At the time, Clover chief executive Johann Vorster said the takeover showed that international investment could result in job creation, “huge investment” and “export opportunities”, as well as facilitate South Africans being able to work overseas.

Those jobs never materialised. “The government supported this merger and Milco promised to create 500 jobs, but since they took over about 2 000 workers have lost their jobs and six factories face closure,” said Giwusa president Mametlwe Sebei.

Patel has not responded to the unions’ call to nationalise Clover. Sebei said this illustrates the “complete impotence and bankruptcy” of the ANC government.

“We are watching a 120-year-old company, the biggest manufacturer of dairy products in South Africa, being destroyed before our very own eyes. Where factories are being closed, the only solution is for the government to expropriate those factories in order to defend jobs and the local economy,” he added.

Seven weeks into the strike, Clover still refuses to back down on its bid to slash costs by R300 million, with spokesperson Louise Fortuin saying that the company has not changed its position since the strike began.

The strike was sparked by a three-month dispute over Clover’s decision to retrench several hundred workers, cut pay by 20%, introduce a six-day working week with compulsory work on public holidays, institute a 12-hour working day with no overtime, reduce the number of workers who offload dairy products to one per truck and shut down several inland Clover factories.

The unions fear that by closing the inland factories and keeping plants in the port areas open, Milco SA intends to turn Clover into a mere distribution company for Israeli dairy products.

Wasp said “chicken dumping”, whereby an oversupply of overseas chickens were sold in South Africa at below market prices, has shown that cheap imports leads to the collapse of local businesses.

“It is no surprise that the neoliberal, business-friendly ANC will stand by and watch the biggest cheese factory in Africa shut down. Thousands of jobs have already been lost in poultry and grain farming. R6.1 billion leaves the country every year due to poultry imports, according to the South African Poultry Association. This is exactly the future that awaits if we allow the dairy industry to follow a similar path of dismantling our local production capacity and becoming reliant on imports,” said Wasp.

The CBC is owned privately by Israeli citizens David and Drorit Wertheim. It operates one of Coca-Cola’s largest bottling facilities globally. One CBC factory is based in the huge Atarot settlement in Jerusalem, which was built on Palestinian farmland that Israel seized illegally in 1970. Only 20 Palestinian families retained their land and homes in Atarot and are now surrounded by Israeli factories, which “operate up to 24 hours a day, consistently emitting various forms of toxic pollutants into the air”, according to Palestinian public interest law centre Al-Haq.

The Palestinians who live in the area are forced to pay rates to the Israeli Jerusalem municipality, but their homes are “covered with dust and surrounded by garbage disposed of from the surrounding factories”, Al-Haq found. They are forced to use dirt roads and dispose of their own household waste, and are denied connection to the sewerage system, which is for Israeli factories only. Israel frequently seizes their land and fruit trees, and Palestinian children have to walk past Israeli soldiers in the morning on their way to school.

The unions have also asked the Competition Commission to cancel Milco SA’s takeover of Clover, saying the merger was authorised on condition that it did not lead to retrenchments or the downgrading of working conditions.