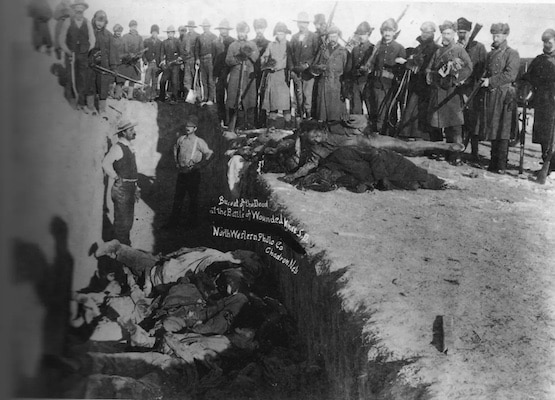 Burial of the dead after the massacre of Wounded Knee in South Dakota. U.S. Soldiers are shown putting Indians in a common grave; some corpses are frozen in different positions. [Source: wikipedia.org] 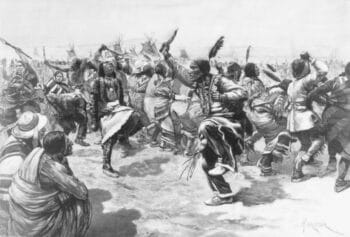 “Our nation was born in genocide. We are perhaps the only nation which tried as a matter of national policy to wipe out its indigenous population. Moreover, we elevated that tragic experience into a noble crusade. Indeed, even today we have not permitted ourselves to reject or feel remorse for this shameful episode.”

Those words were spoken by Martin Luther King Jr in his 1963 book “Why We Can’t Wait.”

Of course, the U.S. was not the only nation who tried as a matter of policy to wipe out its indigenous people–Canada, Australia and others did the same. But the thrust of what King was saying is correct.

The month of December is filled with various kinds of celebrations and festivities; however, there is one event that always seems to be conveniently overlooked by the wider society. This December 29 marks the 131st anniversary of the massacre of the Native people at Wounded Knee. Wounded Knee is located on the Pine Ridge Reservation in South Dakota.

What Whites as a collective do not understand, approve, or develop they demonize, ridicule or attack. Part of the background to the Wounded Knee massacre, lies in the spiritual of the Ghost Dance Movement practiced by some of the Native Nations, among them the Sioux people. After the surrender of the Sioux Nation in the 1876-1877 war, the government drove the Sioux out of Nebraska, all that was left to them was 35,000 square miles of almost useless land. 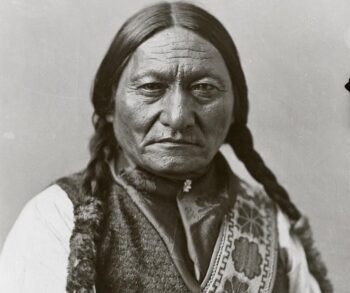 After protests and compromises between the Native Nations and the government, groups settled in various parts of the territory. The 35,000 square miles of land given to the Great Sioux Reservation was mostly taken away eventually from the Native people.

When the Sioux killed George Armstrong Custer of the 7th Cavalry Regiment, the U.S. Army wanted revenge. Sitting Bull, the great Sioux chief was in exile in Canada with some of his followers, where they stayed for four years; this partly explains why the government intruders were successful in retaking most of the land from the Sioux.

Many of the Native people of the Reservation believed in and practiced what was known as the Ghost Dance; a ritualistic dance based on the belief that the dead would come back to life and that non-believers would be destroyed. Sitting Bull was very skeptical. 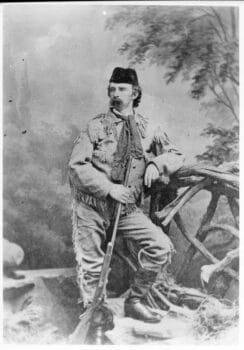 The popularity of the Ghost Dance among the Native people worried the government and soldiers were brought into some Reservations to stop the ceremonies. Indian police were sent to the Reservation to remove and arrest Kicking Bear who went to Standing Rock to teach Chief Sitting Bull’s people the Ghost Dance. Sitting Bull took no action against Kicking Bear, and it was suggested that he be arrested and jailed in a military prison.

On December 15, 1890 forty-three Indian police surrounded the cabin of Sitting Bull while at the same time a group of cavalry stood in waiting as support some miles away. While being taken away by Indian Affairs agents, the leader of the arrest team was shot, in retaliation he fired hitting Sitting Bull instead; a traitor named Red Tomahawk would assassinate Sitting Bull on the spot.

Because of the influence of the Ghost Dance, the Sioux people took no retaliation; instead hundreds fled from Standing Rock to nearby Ghost Dance camps or with Chief Red Cloud at Pine Ridge. On the morning of December 29, 1890, the United States army’s 7th cavalry surrounded a group of Ghost Dancers whose leader was Big Foot a Lakota Sioux chief.

The soldiers demanded that the men surrendered and hand over all their weapons; not satisfied with the number of weapons surrendered, the soldiers raided the tents confiscating axes and knives; only two guns were found from the raid. A fight later ensued between a native and a soldier, a shot was fired, and reports stated nobody knew by whom.

The soldiers immediately opened fire indiscriminately on the unarmed people killing men, women, and children, using Hotchkiss Mountain Guns sited on hills overlooking the camp. When the massacre stopped 153 native people were killed nearly half of them women and children; the cavalry suffered disproportionate losses; 29 soldiers killed and 39 wounded. 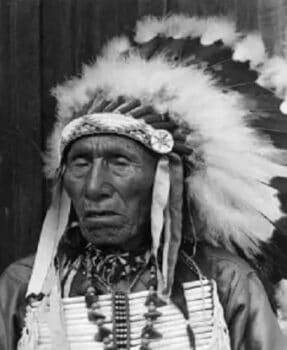 One estimate is that the final toll nears 300 of 350 men, women and children who were in the camp; on top of this the indignity that followed was deplorable. Many of the killed or dying were left to lie where they had fallen and later froze from the snowstorm that followed later that day.

The deplorable scene is best described in a quote by Black Elk in the book Bury My Heart at Wounded Knee by Dee Brown.

On that infamous day of December 29, 1890, the U.S. government fueled by the doctrine of white supremacy, carried out one of its many atrocities that have repeated themselves dozens of times over—in places like My Lai, No Gun-Ri, Bola Baluk, Baghuz, the Plain of Jars and Kunduz among others around the world where the U.S. army has slaughtered native peoples.

These latter crimes reiterate that America’s unwillingness to “reject or feel remorse for this shameful episode [genocide of natives],” as Martin Luther King Jr. put it, continues, and is embedded in the ideology of white supremacy and great power chauvinism that drives imperialist policies. 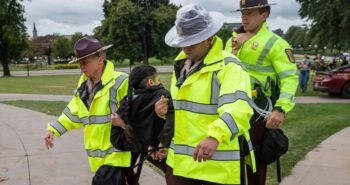 To this day, each successive Administration has only given hypocritical lip service in acknowledging the atrocities meted out to the Native people. Whether it is the disparity in the allocation of resources for development; the imprisonment of Leonard Peltier or the activists protesting the Enbridge pipeline, Native-Americans are still oppressed.

Their rights and treaties are still trampled on and ignored and they are effectively written out of the mainstream narrative. “Peace and good will to all men” should meaningfully include the Native peoples.