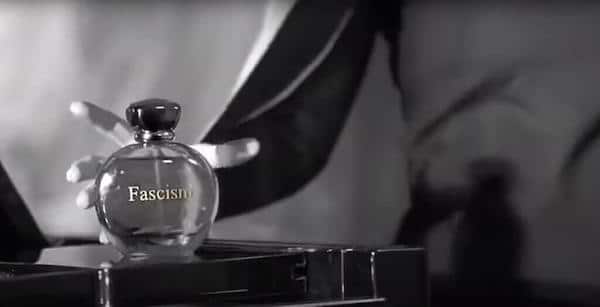 JUSTICE MINISTER AYELET SHAKED SEIZES A BOTTLE OF “FASCISM” PERFUME AND DOUSES HERSELF WITH IT IN AN AD SHE RAN IN 2019 WHEN RUNNING FOR KNESSET, PARODYING HIGH-END PERFUME ADS. SCREENSHOT FROM VIDEO POSTED BY HAARETZ.

In 2014, in the wake of Operation Protective Edge that devastated Gaza and killed 2,000 Palestinians, including more than 500 children, the cognitive dissonance between Jewish moral and religious values and Israeli anti-Palestinian apartheid–and American Jewish support for it all–became too much for me to bear, and I started speaking out against the Jewish oppression of Palestinians–outside the Jewish tribe. After a few years, I started using a phrase that I thought adequately summarized my feelings about it:

The oppression of Palestinians is perpetrated by Jews, in an Israel of, by and for Jews, but it is not Jewish.

In my efforts in the last seven years to educate myself, I’ve been to Israel, East Jerusalem, and up and down the West Bank. I’ve read articles, reports, and books about the oppression–about the facts on the ground, the depressing and undignified conditions of Palestinian life under occupation and within the Green Line, about apartheid, about settler-colonialism, about the Zionist project. But it wasn’t until I was recently browsing the New Non-Fiction shelves of my local library that I happened on the one book that I would now recommend to any American, and especially other Jews, who want to know how bereft of human decency Israelis have become in their treatment of Palestinians, and how much of our Jewish moral and religious patrimony we have given up in creating, supporting and tolerating a Jewish State that so systematically, persistently and brutally deprives Palestinians of their human rights and dignity. 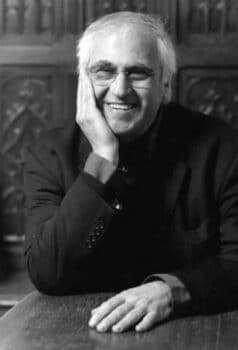 SYLVAIN CYPEL, FROM OTHER PRESS

Author Sylvain Cypel is a French Jewish journalist who has lived for years in New York and Israel and Paris, including as senior editor for Le Monde. His socialist, Zionist, Ukrainian-Polish father fled to France in 1938 before the Nazis wiped out his entire family and almost all their Jewish neighbors, and ultimately led the French Zionist labor movement. Cypel, my contemporary at 74, grew up in that movement, went to Israel after high school in Paris, was drafted and served in the IDF paratroop brigade, and returned to France a committed Zionist, until he returned to Israel to attend University in 1969–the same year I went to Israel for the first time. He, too, was struck by the Jewish nationalistic and colonialist attitudes he found there, with his fellow students talking about the Palestinians “exactly the same way” French settlers talked about the Algerian Arabs before Algeria’s successful war of independence.

As Cypel transformed from Zionist to anti-Zionist, he was punished. “As I became an increasingly active anti-Zionist, my life in Israel got harder. My wife and I were ostracized because of our beliefs, and we lost jobs. Paradoxically, I had many Israeli friends, some of whom vehemently disagreed with me. At the time, that was still possible. It isn’t anymore.” Then in time, “the yawning gap between the promise and the reality of Zionism” drove him away from Israel. He saw that it was “evolving into something no idealist could stomach: a racist, bullying little superpower.” After the May 2018 Gaza fence massacre, he determined to write this book, focusing on what has become of Israeli society, which he takes apart mercilessly but truly.

Some of his observations:

“Total contempt for international law,” the belief that “might makes right,” seeking salvation in the application of force (“and if that doesn’t do the job, apply more force”),

A “colonial mentality of domination” making “war crimes committed against civilian populations part of Israel’s official strategy in its fight against terrorism.”

Israel’s “congenital nativism” and its astounding “ability to deny basic rights to an entire people” with impunity–“without seeming to suffer any political consequences.”

The wholesale abandonment of “a worldview that characterized Judaism in the modern era, one primarily rooted in a progressive conception of humanity and society,” with only a small, determined minority fighting it all. 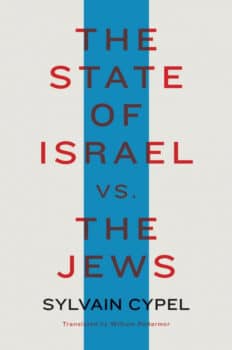 And this is all in the Introduction!

In the first chapter, “Imposing Fear, Teaching Contempt,” Cypel emphasizes three factors which make the occupation particularly oppressive: the forcible expulsion of Palestinians from their lands, the long duration of that expulsion and the occupation which followed, and its “modalities,” i.e., the slow but steady confiscation of land; the seizure of resources; and the deliberate policy of making Palestinians’ daily lives unbearable–“making them feel sick of life”–in hopes they will eventually leave, subjected to the brutal whims of the soldiers constituting “the most moral army in the world (question mark).”

The abounding examples which follow of IDF killings, woundings and beatings, home invasions and demolitions, over just a six-month period in 2018-19, make the point. So do the examples of pointless delays and systematic cruelty at checkpoints and elsewhere which impose a depressed lethargy, anxiety and despair, all designed to exercise “control over a defenseless civilian population.” This control is aided by extremist settlers, who Cypel and his sources say have built a flourishing Jewish Ku Klux Klan movement, which has gained growing acceptance by the Israeli public and their political leaders.

In Chapter Two, “Pissing in the Pool from the Diving Board,” meaning doing bad things with everyone watching, Cypel describes the changes in Israeli society in 50 years of occupation, going, for example, from denying the expulsion of the Arabs because of an awareness that it did not conform to Jewish moral and religious values, to an ever-increasing acceptance of it as desirable, legitimate and free of guilt or shame. This same freedom from guilt or shame, says Cypel, also explains why “Palestinians are shot dead every week” by soldiers who “are never prosecuted,” even when there is no dispute about the facts. That the IDF ranks are increasingly filled with ultranationalist fanatics is just one factor cited for the impunity which has coarsened society with anger and an increasing level of racism and violence that “characterize an entire society.” It is a terrible indictment, for which the trial is yet to be had.

Just as a fish rots and stinks from the head, Cypel describes Justice Minister Ayelet Shaked appearing in a campaign TV ad next to a perfume bottle labeled Fascism promoting “revolutionary” changes, making the Israeli Supreme Court more subservient to the government; former Culture Minister Miri Regev screaming at, and about, a Palestinian MK, “Get that garbage out of here”; and Finance Minister Avigdor Lieberman urging that disloyal Arab citizens be decapitated. Other Israeli leaders get their day in Cypel’s sunlight, from Benjamin Netanyahu on down.

The book next takes on the triumph of ethnocracy inherent in the passage of the Nation State Law in 2018 and the desire to annex more “vital space” for the Jewish people, ensconcing racism, ethnicity, tribe and blood over citizenship. Without mentioning the Nazi analogy, Cypel says that “to Jews, any ideology that prizes the preeminence of blood should bring back terrible memories.” The implication is clear: Wasn’t the Nazi occupation of Europe an expression of the same desire for “vital space” for Aryan blood?

The idea of annexation of Palestinian territory “enjoys much more popular support than it did two decades ago, and has spread far beyond the religious-nationalist camp,” Cypel writes, with a 2019 poll showing that 60% of those with an opinion–and 72% of Israeli Jews–favor annexation, in whole or in part, with most of those pro-annexation opining that they would not allow Palestinian inhabitants of the West Bank any civil rights at all. How low we have sunk! The notions of racial purity and white supremacy inherent in Israeli society’s recent treatment of black African immigrants is of a piece with the anti-Palestinianism and Islamophobia fully described, which brings Cypel to the links with white supremacists and Trumpers here in the USA and authoritarian leaders elsewhere, prompted to a great extent by the cybersurveillance, cybersecurity, cybercontrol and high tech weaponry perfected on Palestinians and sold around the world by Israelis and used by the Israeli security state even against dissident Jews there and in the United States.

Cypel writes that the hostility toward dissident thinkers has increased among Israeli Jews to the point that they are widely considered enemies of the state, to be denounced, fired from jobs, and otherwise cancelled. The desire to live in a liberal democratic society has yielded to the widespread inability to “see Palestinians or Black Africans as human beings,” not just on the part of Netanyahu and his supporters, but by 80 percent of Israelis who have known only a life as occupiers of another people. Respect for law has yielded to the law “exercised by the strong.” The minority still “horrified by the direction their country has taken” are “ a species on the verge of extinction”–“paralyzed,” “ostracized,” and “marginalized.”

While Cypel noted at the outset that he wrote a book focused solely on Israeli society, two of the most interesting chapters explore what the author sees as the differing reactions to all of this by the Jewish Diaspora he knows best–American and French Jews–the two largest Diasporan communities, the former outnumbering the latter by 10 to 1. The two communities have many differences, in how they are organized, religiously and culturally, the strength and number of their associations and media outlets, and their different experiences with antisemitism. But perhaps the most interesting difference is that while the American Jewish community–the majority Ashkenazim–began to divide over Israel and Zionism after the Second Intifada in 2000, French Jews–the majority Sephardim from Algeria, Tunisia and Morocco and generally more antagonistic to Arabs–have continued their “unshakable support for Israel’s foreign policy and took a hands-off attitude toward its domestic affairs.” To this day, in France,

A fundamental theme running through the book is that a Jewish state with a whiff of fascism–an Israel exclusively run by and for Jews, segregating and oppressing its non-Jewish inhabitants–is a clear and present danger to Jews around the world. The threat is not just physical, but spiritual, moral and religious. It is physical in its potential to aggravate antisemitism by persecuting Palestinians, denying their suffering, and helping to foment a deep and persistent Islamophobia, in democratic and authoritarian societies alike. It all feeds hatred of Jews. Cypel points out that Israeli leaders and settler ultranationalists have no compunction about maintaining alliances “with countries where antisemitism is on the rise,” thinking that such alliances strengthen the State of Israel and feeling “that diaspora Jews deserve whatever happens to them” because there is a readily available solution: “come to live in Israel.” In Hungary, for example,

Netanyahu told his ambassador not to get involved when the Jews there were enduring an anti-Semitic campaign.

Perhaps more significant, however, is the spiritual, moral and religious threat the current Israel presents to the Jewish people and Judaism itself. Not only is its “outdated, anti-modern nationalism” incompatible with the evolution of a globalized world respecting the rights and human dignity of all populations, but by “latching on to the emerging power of the new ethnic and authoritarian currents sweeping the planet,” and presenting itself “as a precursor and an original theoretician of this move toward separateness, Israel sets the Jews accompanying its destiny on the path to abandoning that which made Judaism’s culture and glory in the modern age: the multifaceted engagement in progress” and “a rejection of racism in all its forms.”

In his October 2003 landmark New York Review of Books article, the late Tony Judt questioned whether the time for a Jewish state had passed and suggested that it might no longer have a future. Cypel  honors and invokes Judt in concluding that Israel is bad for the Jews, an anachronism, and a dysfunctional one, a “belligerently intolerant faith-driven ethno state,” at odds with “the open and pluralistic democracies” it originally sought to join.

It has been almost 20 years since Judt originally suggested that was where Israel was headed. The sad truth, Cypel so clearly and thoroughly documents, is how far Israel and Israeli Jews have proceeded down that miserable road.