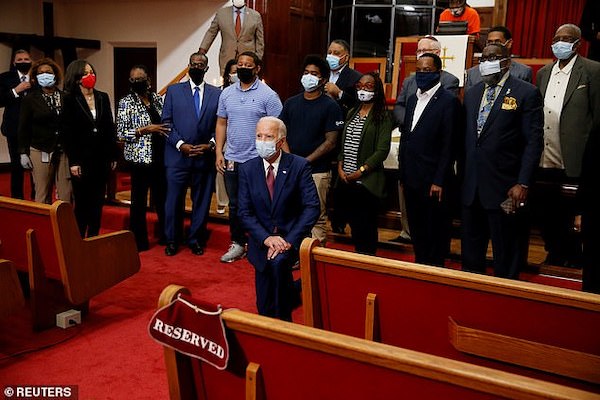 The idea that Joe Biden would provide harm reduction was created to help the unpopular candidate secure an electoral victory. The reality is a litany of lies and certain defeat for democrats at the polls. There is no harm reduction in a system dedicated to neo-liberalism and austerity.

Biden came across as a plantation owner telling the field hands that they have a good life and ought to be grateful.

This columnist wrote those words in December 2020 before Joe Biden was inaugurated. His meeting with a group designated as Black leaders was as bad as one could expect, complete with dismissal, rudeness, and outright disrespect. It was vintage Biden, a man who was never the brightest and is now elderly and not fully in command of his faculties.

But the real Biden was always an unreconstructed racist, bragging about the 1992 Crime Bill which he said would, “Do everything but hang people for jaywalking.” Barack Obama chose him as a running mate precisely because of his credentials among conservative, race baiting democrats. Having run as a fake progressive Obama needed someone decidedly in the conservative camp to balance the ticket.

In 2020 Obama and the rest of the party establishment decided to make Biden the nominee, ordering others out of the race and clearing the field for the candidate who had no constituency outside of the wealthy individuals and corporations that keep the democrats afloat. A combination of fundraising prowess and antipathy towards Donald Trump created a large voter turnout and Biden won the popular and electoral vote.

The democrats’ propaganda machine played no small role in dragging Biden over the finish line. They settled on the term “harm reduction” to convince the skeptical that they should put aside their concerns and vote for the man they didn’t want. Biden won with a record breaking number of votes, and in cities across the country democrats quite literally partied in the street when he won.

Biden was propelled by the same propaganda effort when his term began one year ago. We were told that he was “the most progressive president since FDR.” The democrats are still living off their reputation from Franklin Roosevelt’s Social Security Act and the creation of Medicaid and Medicare during the Lyndon Johnson administration. No democrat has created anything of the sort in the last 50 years but the memories linger and scoundrels evoke the past in order to fool the people in the 21st century.

We were told that Biden’s stimulus plan and child tax credits would “cut child poverty in half.” Absent an increase in the federal minimum wage and lacking permanent legislation, it did no such thing. The child tax credit ended in December 2021. Expanded unemployment benefits ended in September 2021, and republican led states refused to provide the additional payments that congress had authorized. They did so without push back from Biden or from democrats in congress.

Now Biden’s approval ratings have plummeted and it isn’t hard to understand why. Put simply, he lied in order to get votes. He said he would forgive student loan debt for those who attended public colleges and whose families met income guidelines. He could have done this without congressional approval but he hasn’t acted. It is clear that he never had any intention of raising the minimum wage, using the Senate Parliamentarian as an excuse to avoid doing what he promised voters he would do.

The enormity of the duplicity is galling to millions of people. After Trump advocated raising a stimulus payment from $1,400 to $2,000 Biden did as well, but after assuming office $2,000 turned into just $1,400. Adding the $600 already received to $1,400 was an outright betrayal but it is one that was explained away by the corporate media and democratic party operatives.

The Build Back Better bill languishes. Democrats try to placate the oligarchs who Biden promised, “Nothing will fundamentally change,” while also pretending to be the harm reduction that voters came to expect. Having failed to do what the people want, Biden then made a phony effort to pass voting rights legislation. That bill is dead on arrival but Black voters are still seen as the group that is easiest to fool and that can be silenced with a stirring speech instead of action. The trap of seeing Black politics as little more than keeping republicans at bay always ends in defeat and humiliation.

“Progressives” in congress join in giving Biden cover. Pramila Jayapal said, “I give him an A,” and Alexandria Ocasio-Cortez announced that Biden, “Exceeded expectations.” At the end of the day sleight of hand and Trumpophobia were supposed to silence people who turned out in droves to put Biden in office.

Biden is nothing if not consistent and transparent. He does see himself as the boss who tells Black people that they shouldn’t complain. As he famously said in the December 2020 meeting, “If it doesn’t count for y’all to hell with y’all!”

But now the bloom is truly off the rose. The campaign lies and the failure to address the covid pandemic make it difficult for all but the dead enders to support Biden and vice president Kamala Harris. The Black political class will fulfill their role and continue to put lipstick on the pig. The people aren’t fooled though and they won’t turn out in the numbers needed to keep democrats in control of congress. Although democratic control means very little. The military industrial complex gets $770 billion in funding regardless of who is in control. Biden has pledged not to provide medicare for all and he didn’t even present a public option for health care. As for claims that the democrats are more environmentally friendly, Biden has approved more oil and gas drilling permits on public land than the Trump administration did.

Biden is hoisted on his own petard of obedience to the ruling class. Black voters get little more than improved twitter posts. Then again, when Kamala Harris writes drivel such as, “Because of the Bipartisan Infrastructure Law, America is moving again. That’s what infrastructure is all about: getting people moving,” one wonders if even that is true.

Biden isn’t predisposed to do what Black people need. All the platitudes and promises are inevitably hollow. In any case, there is no harm reduction in a system dedicated to neo-liberalism and austerity. At the end of the day, millions of people have nothing except hope that the plantation master of the moment will somehow be kinder.