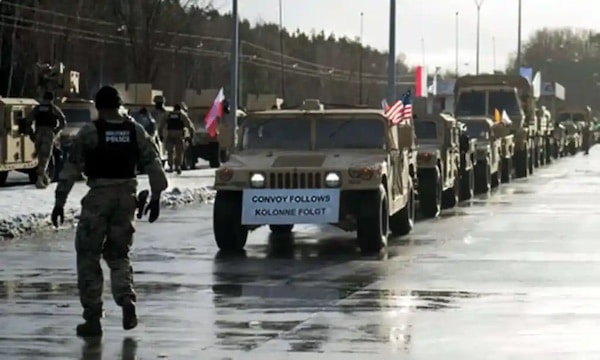 U.S. military convoy at the Polish-German border in Olszyna, Poland.

Wall Street and the stock market have been like a roller coaster.

On Jan. 24, stocks were falling, with the S&P 500 Index down 3.8%, the Dow Industrial Average down 2.7% and the Nasdaq Composite down 4.5%. The widespread sell-off for the Dow and the S&P 500 started on the second trading day in January; and for the Nasdaq in November. The Nasdaq is down nearly 20% from its high in November.

Part of the stock market volatility is that inflation keeps jumping upward, pushing wages to new lows. “Although average hourly wages rose 4.7% last year, overall wages fell 2.4% on average for all workers, when adjusted for inflation, according to the Labor Department,” the Jan. 22 Washington Post reported.

Also part of the turmoil is the cryptocurrency crash. The dramatic sell-off in bitcoin and other cryptocurrencies has been even steeper than the stock market fall. Bitcoin lost more than 12% on Jan. 21, with Ethereum losing 15%.

The two largest cryptos now trade at 50% below from their all-time highs. As the Washington Post reported, “A two-month slide in the global cryptocurrency market has vaporized $1.4 trillion.” The losses are tremendous.

The capitalist economy was pushed into a steep downturn by the pandemic.

At the beginning of the global COVID-19 pandemic in March 2020, shutdowns swept the capitalist world economy in a frantic and failed attempt to bring the pandemic to a halt.

Much like what happens when a country goes into a war economy, normal capitalist production stopped. Industrial production in the U.S. suffered the most severe plunge on record.

The Federal Reserve reported on May 15, 2020, that its industrial production index tumbled a record 11.2% in April 2020. Manufacturing output also posted a record drop–13.7%–as the production of cars, trucks and auto parts plummeted more than 70%.

Production of aerospace and other transportation products, metals and furniture fell around 20%. Output dropped 6.1% at mines and 0.9% at utilities. The implosion of the U.S. industrial sector was known, but the scale of the collapse was stunning.

Industry was running at 64.9% of capacity in April 2020, shattering the previous record low set in the Great Recession years of 2007-09. Factory capacity utilization also hit a record low of 61.1%.

This was not a capitalist crisis of overproduction, the usual boom and bust cycle of capitalism, but instead capitalist production crashed because of the shutdown to fight the pandemic.

This sudden cutback in production threatened to cause a deeper crisis. That’s when the Federal Reserve central bank “expanded” the money supply, printing more money. That stalled a general collapse.

Congress distributed some of this newly-created money to the general population with stimulus checks. The IRS issued three stimulus checks, one in April 2020, a second in December 2020-January 2021, and the last one in March 2021.

In the initial $4 trillion “relief” package passed by Congress, $884 billion went to workers and their families; that is less than one-fifth of the money. The rest went to businesses, primarily major corporations like the airline industry that are part of the military-industrial complex, not just to producers of consumer goods and services.

One of the effects of the stimulus checks, however, was a surge in consumer spending. This surge meant the industrial and merchant capitalists had to rebuild inventories, as well as rebuild raw material supplies and parts. This created a demand for commodities throughout the capitalist world, which turned out to be highly inflationary.

Coming out of the coronavirus depression has been bumpy in the U.S. The shutdowns ended prematurely, with industry reopening without controlling the spread of the coronavirus. With each reopening there has been a new wave of COVID-19 infections, followed by temporary restrictions and mandates that have so far failed to bring an end to the pandemic in the U.S.

Putting business demands first has proven to be bad for public health. In China, using a broad, socialist public health system, the coronavirus is under control. China has not turned over its healthcare system to the pharmaceutical industry and therefore has not made vaccinations its only way to fight the coronavirus.

In fact, China has no vaccine mandate–everyone can get the vaccine and most do because they want to protect themselves and everyone around them.

China has taken a broad and vigorous approach to fighting COVID-19 that includes easy testing, physical distancing and full meal delivery to anyone requiring isolation, masks, good ventilation, and full contact tracing as well as vaccines.

As with any capitalist depression, the economic impact has been hardest on the working class.

The official unemployment rate reached 14.8%–or really 33.2% according to the Ludwig Institute–in April 2020 after industrial production was shut down. That was the highest since the Great Depression of the 1930s. In October 2021, reports indicated that almost 10% of adults in the U.S. reported that their households didn’t have enough to eat.

The unemployment figures given by the Labor Department and reported in the big business media don’t include part-time workers who want full-time jobs or so-called discouraged workers who have been unable to find a job. The true rate of unemployment right now is 23.3%, says the Ludwig Institute.

While there are misleading reports about “labor shortages” in the big business media, the jobs that aren’t being taken are at poverty-level wages and most often are dangerous to personal health and well-being, mainly from exposure to COVID-19.

To help revive the economy, President Joe Biden and the Democrats have proposed a set of legislative packages that together they call “Build Back Better,” at a projected cost of $2.2 trillion over 10 years. So far, they have been unable to enact any of this legislation, mainly because of two Democratic senators.

Sen. Joe Manchin (D-W.Va.) got a surge in donations from “corporations, business leaders and outside groups” including Verizon, Union Pacific, Wells Fargo as well as the Koch network, CNBC reported, to oppose Build Back Better.

The other is Sen. Kyrsten Sinema (D-Ariz.), who got contributions from over 50 billionaires, including several Trump supporters, to oppose Build Back Better.

Meanwhile the Democrats have been able to super-size the Pentagon’s budget to $768 billion for 2022. According to a projection by the Congressional Budget Office, military spending over the next decade will be about $8.5 trillion.

On Jan. 25, The Intercept reported that House Democrats are looking to bypass typical procedures and fast-track a vote on legislation that would send $500 million in military aid to Ukraine.

Why is Congress increasing military spending, when the alleged reason to block “Build Back Better” was because it was excessive?

The Pentagon buildup is a political manifestation of the capitalist economic drive to war caused by the need to subordinate other countries and peoples to the profit-making activities of U.S. big business.

The demands of imperialism are what’s driving Congress, determining what gets funded and what’s put aside.

Right now, the U.S. sees the confrontation with Russia as a way to cut Europe off from Russian gas–and force it to buy U.S.-controlled gas–as well as blocking the “Silk Road” overland trade with China. That’s why the Democrats can pass the biggest Pentagon budget increase ever but can’t manage to fund Build Back Better.