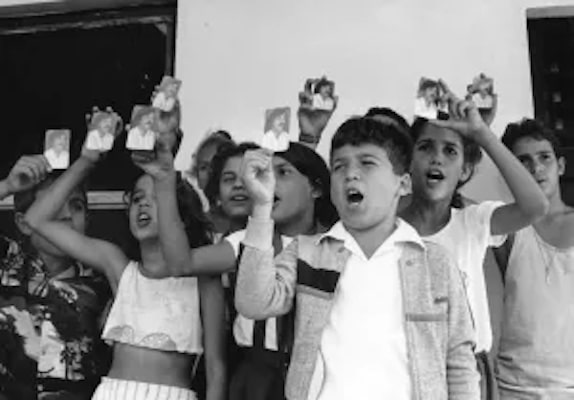 Last Friday, it became known that the 77-year-old Native American political prisoner Leonard Peltier was sick with COVID-19. Peltier has been in prison for over 46 years, which makes him the oldest political prisoner in the United States. This fact has brought attention to his case, but the truth is that his freedom has been a permanent demand of a movement since the first day of his unfair incarceration.

For decades, American and foreign activists along with renowned personalities like the Dalai Lama, Reverend Jesse Jackson, Senator Patrick Leahy, and even Pope Francis have demanded justice to be done in his case. However, former presidents Bill Clinton, George Bush, and Barack Obama all turned a blind eye to the issue, neglecting their role of correcting a penal system that is cruel and dysfunctional at best, as is so vividly demonstrated in the case of Peltier.

Since President Joe Biden got the White House, several petitions have been presented to him but they all remain unanswered. Among those demanding Biden to grant executive clemency to the Native American civil rights activist is former prosecutor James Reynolds, who helped send Peltier off to prison in 1977 and took part in two out of three appeals filed by Peltier’s defense. In his letter to the president, Reynolds acknowledged he was part of rigged trials to send Peltier behind bars with no evidence of guilt.

But why should Biden grant executive pardon to a native American who allegedly killed two FBI agents? Recognizing the injustice might be the first reason to do it since there is plenty of evidence supporting Peltier’s long-standing innocence.

Taking into account Reynolds’ statements and all the evidence gathered throughout these 4 decades, it is clear that the court system sided with the government agencies, namely the FBI, to find Peltier guilty of a double homicide, even when there was overwhelming evidence  supporting his innocence. The FBI threatened and intimidated witnesses to get prejudiced testimonies, and hid ballistic tests assuring that Peltier’s rifle had not shot the bullets that killed the two FBI agents.

The trial was such a fake that after the prosecutors actually admitted they did not know who really killed the agents, Peltier was found guilty of aiding and abetting the murders and sentenced to two life terms in prisons. It is also suspicious that the other two people who were initially indicted together with Peltier were found innocent due to the lack of consistent evidence. At one point Peltier was the only suspect left and someone had to pay for the death of those two agents.

Another aspect of the case is that it is sadly another example of COINTELPRO’s work since, at the time of his arrest Peltier was under FBI surveillance for his activities in defense of Native Americans’ rights. The government wanted to make an example of him to others about what could happen to them for standing up for justice for their own people.

Another reason why Biden should grant clemency is that Peltier fulfills the criteria for commutation. It was perfectly described by the head of the Senate Committee that oversees the Bureau of Indian Affairs, Senator Brian Schatz. He wrote a letter to the president saying that Peltier is old and suffers from critical illnesses; he has already served enough time in prison; and lastly, the unavailability of other remedies in prison.

Leonard Peltier suffers from diabetes, heart disease, kidney disease, and high blood pressure. For an aging man in his condition, getting COVID-19 amidst these circumstances is nothing less than a death sentence. Peltier had complained before that the authorities at the high security federal prison in Coleman Florida have refused to give him a Covid booster shot. Peltier has described the prison as a “torture chamber” since the pandemic began.

How it is possible that despite Peltier’s pleas to get a booster dose  he had been denied by prison authorities? The Bureau of Prisons (BOP) argues that they have not been able to vaccinate, even elder prisoners, with the booster dose. Notwithstanding, in the outside world, the government issues vaccine mandates. So the problem is not the lack of vaccines and resources but the will to treat prisoners as human beings.

However, Peltier is just an example of the treatment that political prisoners get in the U.S.. As we mentioned in a related article titled “Political Prisoners in Cuba and in the United States; Facts and Fiction, Part 2”, other political prisoners like Sundiata Acoli or Mumia Abu-Jamal also got COVID last year and are also suffering critical illnesses, and their lives are still at high risk. The judicial–penal system seems committed to indifference to prisoners in general and in particular political prisoners and are content to just allow them to die as was the case of Russell Maroon Shoats, who was released in critical health condition and died just 51 days later.

Political Prisoners are the most visible cases, but the problem affects the entire in-jail population, accounting for 2.3 million people. One in 4 incarcerated people in the world are in the U.S.; a country that makes up less than 4% of the world’s population. It is twisted that the United States does not care about them. Why? Because the great majority are Latinos, black and poor people? Where is the respect for Human Rights? Where is the empathy and social conscience? This is something that American society needs to look at in earnest.

Most of those people might be guilty of some crimes but remain victims of a social and political system that marginalizes them and takes away any chances of any decent developmental training or reintegration back into society. In other cases, the only crime they might be guilty of is being loyal to their ideals and fighting for a more equitable and fairer country, as is the case of Leonard Peltier. Based on that alone everybody who loves justice and fair causes should stand with Peltier and demand Biden to save an innocent life.

“In and out of lockdown last year at least meant a shower every third day and a meal beyond a sandwich wet with some peanut butter, but now with COVID as an excuse, nothing. No phone, no window, no fresh air, no humans to gather with, no loved ones’ voice, no relief,” as Peltier described his current situation in Coleman. There is no better description of the inhumane conditions of the United States prison network, which is the biggest and most crowded in the world.

Today these terrible conditions became even more exacerbated when the entire 120 federal U.S. prisons in the U.S. went into complete lockdown after 2 inmates were murdered in the federal prison in Beaumont Texas, a notorious prison where Cuban political prisoner Ramon Labanino of the Cuban 5 spent many years for monitoring the activity of Cuban terrorists operating in the U.S. against his country.

It is evident that Peltier’s life is in grave danger making Biden’s executive pardon  a life-or-death decision. The buck stops with the president who with a stroke of a pen could free him.

The U.S. government is not known for making decisions based on a moral obligation but Biden could take the opportunity to do just that. The life off Leonard Peltier, the courageous Native American fighter for justice, is in his hands. And the critical question remains, what reason could Biden have not to free him?