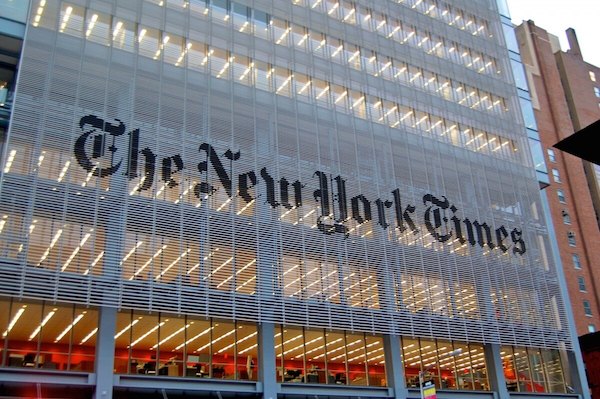 Let me start this indictment of the New York Times’ coverage of Israel/Palestine on a personal note. I’ve been following the U.S. mainstream media closely for more than a decade for Mondoweiss, with a particular focus on the Times. In 2019 I spoke at the annual conference of the excellent Washington Report on Middle East Affairs, and my topic was “How the New York Times Rigs News on Israel Palestine.” (My talk, available on YouTube, has gotten nearly 27,000 hits, which suggests that there is interest in the subject).

So when it comes to New York Times bias, I’m not naive. But I admit to being astonished, almost speechless, at the fact that more than a week has passed since Amnesty International released its landmark report charging that Israel was characterized by “apartheid”—and that so far, America’s newspaper of record has not printed a single word. The omission is especially stunning because Timesjournalists often cite Amnesty reports about human rights violations elsewhere in the world. Just last month, for instance the paper mentioned Amnesty in 7 different articles.

That the Times continues to ignore the Amnesty news is also astonishing because there has been plenty of public debate about it. The pro-Israel lobby is “going haywire” over Amnesty’s finding. AIPAC, the lobby’s old warhorse, predictably called it an “outrageous slander,” and implicity endorsed the charges that it is “antisemitic.” The more liberal Zionist wing of the lobby, organizations like Partners for Progressive Israel, issued a more balanced reaction:

While we therefore refrain from using the word “apartheid,” we appreciate the work of Amnesty International insofar as it directs American and international attention to the reality of ongoing injustices.

U.S. politicians have also chimed in, mostly to attack Amnesty. The State Department went out of its way to “reject the label” on “the world’s only Jewish state.” And Haaretz, the leading newspaper in Israel, has not been afraid to run at least 5 articles so far about the Amnesty report. So the Times‘s failure to report any of this is no oversight, but a deliberate effort to suppress the news.

What happened? Last April, when Human Rights Watch released a similar report that said Israel practices “apartheid,” the paper’s Jerusalem bureau chief, Patrick Kingsley, did publish an article—even though he attacked the report before he even summarized it fully. A source in the Israel/Palestine journalism world is nearly certain that Kingsley has pitched an article this time around, but that Times editors have blocked it so far.

How long can the Times news blackout continue? Is it possible that the paper’s higher ups recognize that they will have to eventually publish something, but by the time they get around to it the news will have simmered down enough to pass with less notice? And will Times opinion writers like Thomas Friedman and Bret Stephens ever say anything? If they do, how can the paper in good conscience run editorial pieces about events that never appeared in its news pages?

Meanwhile, brave organizations like Jewish Voice for Peace were not afraid to speak up and be counted. JVP’s Rabbinic Council did not hesitate to release an inspiring statement in response to Amnesty’s finding. Here is part of it:

We, the Rabbinic Council of Jewish Voice for Peace, stand by the recent reports which use the term ‘apartheid’ to describe Israeli rule over Palestinians. The past year’s reports by B’tselem, Human Rights Watch and now Amnesty International contain well-documented evidence describing how the State of Israel maintains a system of identity-based domination over Palestinians. This detailed evidence demonstrates the systemic and shocking human rights violations and extreme violence and cruelty unleashed upon Palestinians living both under Israeli military and civil jurisdiction.