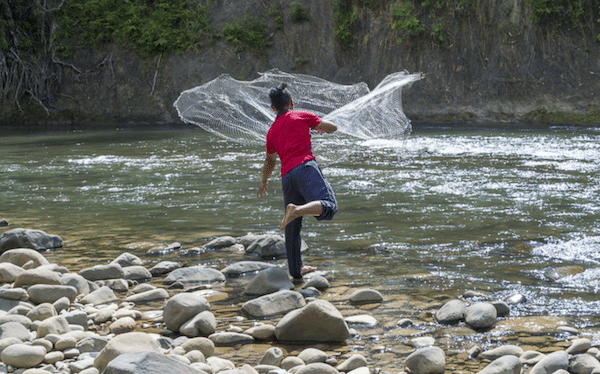 An agreement for the rights to the natural capital covering 2 million hectares (4.9 million acres) in Malaysian Borneo for the next 100 years “in its present form is legally impotent,” according to Nor Asiah Mohd Yusof, the attorney general for the state of Sabah.

Nor Asiah’s assertions are the strongest signal yet that the sweeping pact involving a Singaporean shell company lacks the support of key leaders in the state.

“The State Government will not permit any land to be leased, transferred or otherwise ‘handed over’ as part of any carbon trading or carbon monetisation program,” she said in a Feb. 9 statement. “This includes the proposed NCA.” 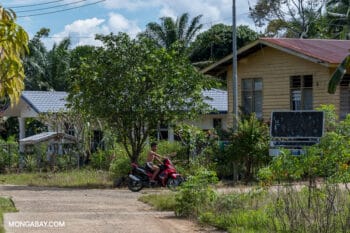 The NCA, short for nature conservation agreement, was signed between leaders of the state of Sabah and representatives of Singapore-based Hoch Standard Ptd. Ltd. on Oct. 28, 2021. Though the specifics of the NCA remain vague, it enlists Hoch Standard to help the state sell credits for carbon sequestration, water provisioning and other natural capital stemming from the protection of Sabah’s forests from logging and other potentially destructive uses. In return for its services, Hoch Standard will get 30% of the revenue, according to the deal’s terms.

Mongabay reported on Nov. 9 that the deal had been struck in secret. One person who said he was involved in the negotiations—Peter Burgess, the Australian CEO of Malaysia-based Global Nature Capital Sdn. Bhd. and Tierra Australia Pty. Ltd.—told Mongabay that Indigenous communities didn’t know that the NCA had been signed. According to Burgess’s own presentations on nature capital management plans that were shared anonymously with Mongabay, Tierra Australia and Global Nature Capital are global consultancies that specialize in the “Conservation of Biodiversity and Ecosystems,” as well as financial technologies such as blockchain. 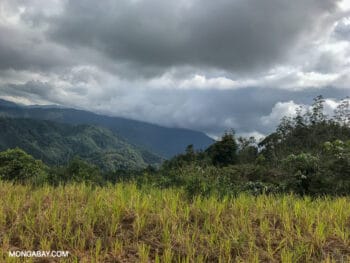 Profits from the sale of natural capital credits, Burgess said, would be funneled into health care, education and employment programs aimed at benefitting Sabahans.

After learning of the agreement, Indigenous leaders raised concerns that the sale of these rights could choke off access for communities that depend on these forests.

Perhaps the most significant issue they have was not with the deal itself, but the way it came about.

“We would be very happy if there are investors or people who want to support that kind of endeavor,” Anne Lasimbang, a member of Sabah’s Indigenous Kadazan-Dusun ethnic group and one of the founding members of Partners of Community Organizations in Sabah (PACOS) Trust, told Mongabay at the time. “If it is done properly, it will actually benefit us.”

Jeffrey G. Kitingan, the second deputy chief minister of Sabah, later confirmed during a Nov. 18 press conference that consultations had not taken place. The two million hectares in the NCA would be Class I “totally protected areas,” he said, which would have required consultation with Indigenous communities when that designation was made. 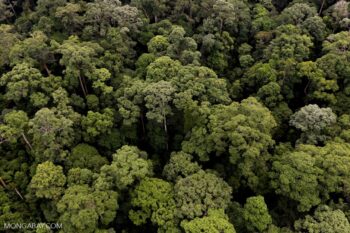 The U.N. Declaration on the Rights of Indigenous Peoples mandates that governments obtain the free, prior and informed consent, or FPIC, of communities when decisions are apt to affect their rights to land and resources. In her statement, Nor Asiah says that the NCA cannot move forward without it.

“No carbon trading program will be agreed to nor implemented without the free prior informed consent of Native Communities whose customary rights may be impacted by such programs,” she wrote. She also noted that the specific areas to be included under the deal “have not been identified, ascertained or designated.”

Subsequent reporting by Al Jazeera pegged the value of the agreement at $80 billion over the next century, meaning that Hoch Standard could stand to earn $24 billion with its 30% cut of the proceeds. 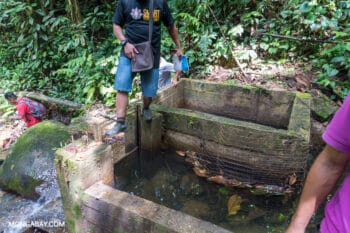 The text also lays out various conditions and penalties that skeptics worry would force Sabah into a situation in which the state loses control of its forests with little to show for it. For example, the terms currently bar the Sabah government from backing out of the deal. Hoch Standard meanwhile appears to retain the ability to sell its rights to another company.

But Nor Asiah said such clauses weren’t binding or enforceable until the 2-million-hectare area was defined.

“Moreover, the State Government will not permit such inequitable and one-sided penalty clauses to be incorporated in the event that the NCA is finalised,” she wrote, and said an addendum that removes all “all unfair and absurd contract terms” would have to be grafted onto the NCA before it comes into force.

The state attorney general has also launched “a more in-depth due diligence process” to assess the qualifications of Hoch Standard and the agreement’s backers to lead Sabah into the business of selling credits for its carbon, as well as other natural capital as outlined in the text, on the global market.

Kitingan told Al Jazeera that Hoch Standard was worth $10 million and backed by capital-rich firms. But records seen by Mongabay indicate that shareholders in the private company have only paid $1,000—what businesses refer to as “paid-up capital”—into the company’s accounts. There is also no public record of Hoch Standard’s experience in carbon trading. 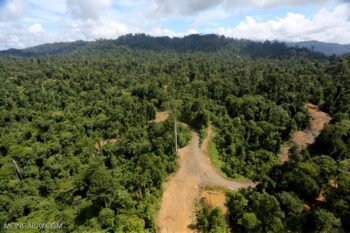 A logging road through the forest in Sabah. (Photo: Rhett A. Butler/Mongabay)

Months before most Sabahans or the world at large even knew of this deal, Burgess and its other proponents were actively working to scupper the routine due diligence that’s a standard part of many significant financial transactions. Al Jazeera reported that an email from May 2021 showed Burgess had cried foul when he learned that investigations into Ho’s bona fides were underway.

“This is deeply disturbing,” Burgess wrote in the email, which was also leaked to Mongabay. He noted that Kitingan and Ho “had several telephone conversations and correspondence relating not only to our [nature capital] proposal to the Sabah Government, but also other major potential multi-$billion investments that Dr Ho can mobilize to stimulate Sabah’s economy.

“Dr Ho has an impeccable reputation in Singapore as a corporate person, a successful businessman and currently holds the position of Singapore Ambassador to Mexico,” Burgess continued.

For his part, Kitingan has repeatedly vouched for Ho and insisted that further inquiries involving him or Hoch Standard are unnecessary, though he has declined to provide further detail on where the company’s financial backing will come from.

Media reports have also revealed that Kitingan’s claims that the deal was approved by the state legislature were unfounded. Former Sabah chief minister and rival political party leader Seri Mohd Shafie Apdal has said that there has yet to be a motion for the assembly to debate the NCA, according to the news site The Vibes.

Even one of the signatories of the agreement, Sabah’s chief conservator of forests, Frederick Kugan, said he had reservations.

“I was told to sign the document based on the understanding that it is incomplete and will require much more work,” Kugan told Al Jazeera. 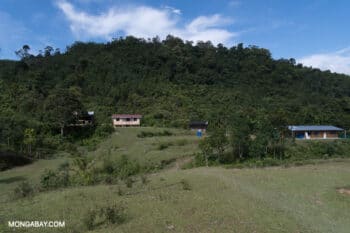 A village in the Crocker Range. (Photo: John C. Cannon/Mongabay)

On Feb. 9, the same day that the attorney general released her update on the NCA, a group of NGOs and scientific organizations based in Sabah released their own statement. They argue that the NCA requires a thorough review before setting its provisions in motion.

“The technical problems with earning revenue from carbon trading are substantial,” Glen Reynolds, an ecologist and the director of the South East Asia Rainforest Research Programme based in Sabah, said in the statement. Reynolds has long been a proponent of finding ways to leverage the carbon sequestration capability of Sabah’s forests. “At the heart of it is additionality—you can only sell the extra carbon your actions cause to be safely stored in the forest.”

That might involve restoring forests that have been logged, but in theory at least, Sabah’s totally protected areas, which Kitingan said will be covered by the NCA, should be protected from such impacts. Opportunities might exist to restore parts of these areas that were degraded before they were set aside, Reynolds said, but that only amounts to about a third of Sabah’s bank of Class I forests.

He also noted the challenges that come with bringing forests back. It took 25 years to restore 12,000 hectares (30,000 acres) in the state’s largest such effort to date. “[N]o place in the world has managed to restore tropical rainforest at the scale proposed under the NCA,” Reynolds added.

The organizations also question whether an $80-billion payout from monetizing the state’s carbon is even possible. The figure is based on estimates of the amount of carbon sequestered by two million hectares of lowland tropical rainforest like that found in Borneo and its value on the global market, which Kitingan shared at his Nov. 18 press conference.

A breakdown of the proposal put together by the organizations notes that the amount of carbon the trees sequestered annually touted by Kitingan—20 metric tons per hectare—and the carbon’s monetary value—$20 per metric ton—are likely not realistic.

“This effort to hypnotise Sabahans with promises of easy money that was never there needs to be replaced by hard and honest work towards a Carbon Sovereign Sabah, one where open public discussion enables our professionals across the sectors to work out ways carbon trading can actually benefit our forests, our rural communities and our State,” Cynthia Ong, chief executive facilitator and founder of the Sabahan NGO Land Environment Animals People (LEAP), said in the statement.

The attorney general said that the NCA would not go forward without such discussion.

“The State Cabinet has approved the concept on carbon trading in principle,” Nor Asiah said. But the path to finalization of the agreement would go through “a multi-party dialogue with all stakeholders where representations from across all political factions in Sabah will be called upon.”

John Cannon is a staff features writer with Mongabay.