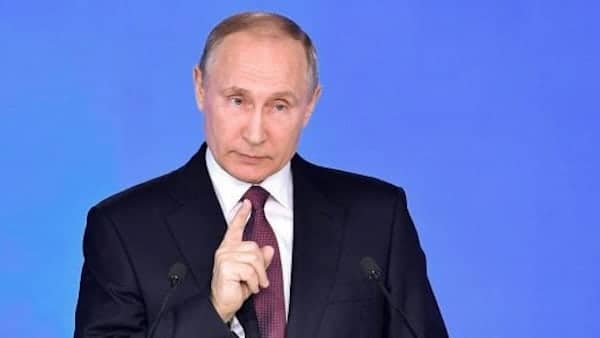 Putin’s State of the Union (Photo: The Greanville Post)

In particular, it is necessary to correct numerous articles that claimed that the pledge made by the United States to Gorbachev in 1991, according to which NATO “would not move an inch in the East” in exchange for German reunification and the withdrawal of Red Army troops from Eastern Europe, was a “myth” forged by the Kremlin in order to neutralise or even invade Ukraine.

This thesis is based on an article published in Foreign Affairs magazine in 2014, at the time of the Ukrainian crisis, and reaffirmed in a book published last November. Its author, Mary E. Sarote, is a member of the most influential think tank in U.S. imperial politics, the Council on Foreign Relations, whose opinions are more propaganda than impartial study.

For this so-called “myth” could not be truer. It is essential to be aware of it if we want to both understand what is happening and find a negotiated solution to the conflict.

On February 9, 1990, James Baker, then U.S. Secretary of State, said exactly this: “we consider that the consultations and discussions in the framework of the 2+4 mechanism should provide a guarantee that German reunification will not lead to an expansion of the NATO military organisation to the east.” The next day, Chancellor Helmut Kohl echoed, “We consider that NATO should not expand its sphere of activity.”

In December 2017, the National Security Archive at George Washington University published memos, minutes and telegrams from that time, from which it emerges that Western assurances appear in numerous documents recorded or written during chancellery exchanges in 1990 and 1991. All the details can be found on the university’s dedicated website, under the heading “NATO Expansion: what Gorbachev Heard. Declassified documents show security assurances against NATO expansion to Soviet leaders from Baker, Bush, Genscher, Kohl, Gates, Mitterrand, Thatcher, Hurd, Major and Woerner. Slavic Studies Panel Addresses ‘Who Promised What to Whom on NATO Expansion?’”

Former American ambassador to Moscow, Jack Matlock, also confirmed these facts in his various publications. Guarantees have therefore been given, even if they are not contained in a treaty signed in due form.

But you have to be willing to take note and recognise that a word is a word.

It was only later, with the rise of the neoconservatives, that President Bill Clinton decided to ignore them and succeeded, in 1997, in expanding NATO eastwards by admitting new members in exchange for a $4 billion “bribe” to his friend Boris Yeltsin, as Yeltsin later called this gift.

At that time, the most resolute anti-Russian in the American administration, Zbigniew Brzezinski, author of the famous book “The Grand Chessboard. American Primacy and its Geostrategic Imperatives”, in which he explains why the United States should definitely grab Ukraine, foresaw what would happen today: “If Russia is dismissed or rejected, it will be filled with resentment and its vision of itself will become more anti-European and anti-Western.” And he urged Clinton to hurry: “The longer we wait, the louder Moscow’s objections will be,” he predicted in the mid-1990s, while warning against an overly abrupt expansion.

This danger was not overlooked by the father of the Soviet Union’s containment, George Kennan. In a 1997 New York Times article, he prophesized the current situation by writing that, following the breach of the given word to Gorbachev, the admission of Poland, Hungary and the Czech Republic into NATO would be “the biggest mistake of post-Cold War American politics and would only serve to inflame nationalistic, anti-Western and militaristic tendencies in the Russian public.”

Since then, NATO has only made things worse, admitting seven new states in 2004 and promising membership to Ukraine and Georgia in April 2008, before encouraging the latter to attack South Ossetia in August of the same year. This was barely ten months after Putin’s speech at the Munich conference, in which he had expressed the wish that NATO should stop expanding! In 25 years, NATO has doubled the number of its members, all in the East.

At the same time, it accumulated aggressions by brazenly lying and twisting international law: the Gulf War in 1991 (with the fabricated affair of the babies thrown out of Kuwaiti incubators); the dismemberment of Yugoslavia in 1992, the illegal bombing of Serbia in 1999 and secession of Kosovo (justified by the pseudo-massacre of Raçak and the so-called Operation Horseshoe imputed to Serbia); the invasion of Afghanistan in 2001; the Iraq war in 2003 (started thanks to Colin Powell’s lies to the UN); the destruction of Libya and the assassination of Gaddafi (falsely accused of slaughtering his own population) in 2011; the attempted destruction of Syria and the overthrow of its president between 2011 and 2019; the war in Yemen since 2015, carried out under Saudi flag and considered by the UN to be the most important humanitarian catastrophe of our time.

It is therefore very difficult to regard the American-led NATO as an innocent and harmless bridge club.

It should therefore come as no surprise that, after the U.S.-organised coup in February 2014 to overthrow democratically elected Ukrainian President Viktor Yanukovych, whose mistake was to wish for Ukraine to seek a balance between Russia and Europe, Russia regained control of Crimea while the Donbass provinces rebelled against this forfeiture.

The United States and NATO are of course free to renege on their word and continue their aggressive course at the risk of starting a war. But at least the public has the right to know why and how it has come to this without being misled about who is really responsible for what would be a real mess for Europe.