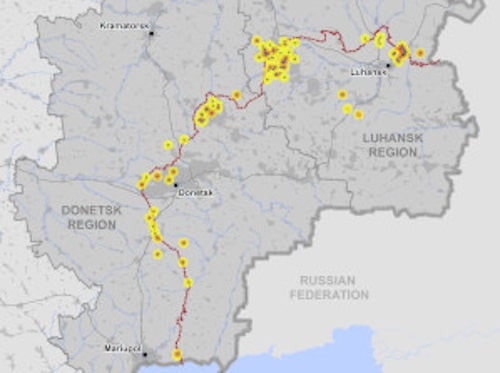 The Organization for Security and Cooperation in Europe has an observer mission along the line of control between the government and rebel side in south east Ukraine.

It reports that on Friday the number of ceasefire violations around the rebellious Donbas region of Ukraine had again nearly doubled:

The ever lying New York Times claims that it is only the Donbas rebel side that is firing artillery:

Artillery fire escalated sharply in eastern Ukraine on Saturday and thousands of residents fled the region in chaotic evacuations — two developments rife with opportunities for what the United States has warned could be a pretext for a Russian invasion.Russian-backed separatists, who have been fighting the Ukrainian government for years, have asserted, without evidence, that Ukraine was planning a large-scale attack on territory they control.
…
At the same time, the firing of mortars, artillery and rocket-propelled grenades by separatist rebels along the front line roughly doubled the level of the previous two days, the Ukrainian Ministry of Internal Affairs said. Two Ukrainian soldiers were killed and five wounded, the military said.

Ukrainian officials said the shelling came exclusively from the separatists, who are seen as a proxy for Russia.

New York Times reporters at the scene witnessed shelling from separatists and saw no return fire from the Ukrainian forces, although residents in the separatist regions said there was shelling from both sides.

The OSCE observer mission helpfully provides maps in its daily reports that show the impact points of artillery attacks. Yesterday a large majority of those were within the rebel controlled areas.

Here is a cutout from the OSCE map below.

Intense artillery barrages targeted a pocket of government-controlled territory around the town of Svitlodarsk, a spot that has worried security analysts for weeks for its proximity to dangerous industrial infrastructure, including storage tanks for poisonous gas.

The concentration of impacts on the left of the above picture is a bit south-east of Svitlodarsk. Artillery rounds landed on both sides of the line of control but the vast majority of them exploded on the Donbas side. The same can be said for the impacts north-east of Luhansk. On Thursday both of these areas were also the aim of artillery concentrations. These are likely crossing points through which the Ukraine military plans to direct its upcoming attack. 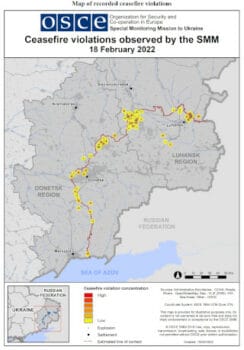 The full map of Friday’s impacts:

This is an information war in with the Russian side is mostly trolling the U.S. side while the Biden administration and its associated media like the NYT are lying through their teeth.

Today’s Washington Post has European officials complaining that the Biden administration has presented them with no evidence for all the claims it has made:

However, some European allies questioned the United States’ conviction that the Kremlin will launch hostilities, saying that they have not seen direct evidence suggesting Putin has committed to such a course of action.One European official told The Washington Post in Munich that “we have no clear evidence ourselves that Putin has made up his mind and we have not seen anything that would suggest otherwise.” Another said that although the situation is grave, “at this stage we do not have such clear intelligence” that Putin has decided to invade.

The officials said they have been told little about the sources and methods the United States used to arrive at its conclusions, limiting their capacity to make independent decisions about how much weight to give statements from Biden that Putin has made a decision to attack.

“It’s always the raw material that they do not share,” said one senior NATO diplomat who has had extensive conversations with top American policymakers in Brussels.

These Europeans have their own satellites and military intelligence analysts. They also talk to each other. They obviously do not see what the U.S., without presenting evidence, claims to be seeing.

While the OSCE observer mission is not completely neutral it is at least professional in its work. It also helps that the U.S. and Britain have retracted their people from the OSCE mission and have less abilities to fudge the results. They were replaced by officers from other European countries.

The OSCE observer mission reports can be found among its press releases. The daily updates are here and the longer term Trends and Observations reports are here.

When in doubt of what is happening take a look at them.