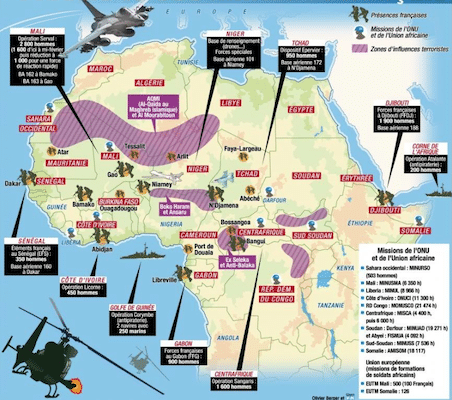 Considering the public media attention and concern about possible expansion of the North Atlantic Treaty Organization (NATO), it is worth reminding people about NATO’s bloody history in Africa. NATO was founded in 1949 after WWII at a time when African countries were still under the yoke of colonialism. In fact most of the original founders of NATO had been Africa’s principal colonizers such as UK, France, Portugal, Belgium, Italy and the USA as lead NATO organizer and dominant partner. The organization was established as a collective defense against the Soviet Union with the requirement (Article 5) that any attack on one was considered an attack on all and therefore requiring a collective response.

Since NATO was founded with the purported purpose of halting possible Soviet aggression and stopping the spread of Communism it would seem to follow that after the collapse of the USSR in 1991 there would no longer be a need for NATO. Since then however, NATO has expanded from the founding twelve to at present thirty member states many of whom are eastern European countries, formerly Soviet republics and Warsaw Pact allies. Today, NATO has become a huge axel in the wheel of the military industrial complex controlled by U.S. empire for the purpose of full spectrum dominance, driven by the ferocious appetites of corporate capital.

Walter Rodney accurately describes the early foundation of colonial Africa’s relationship with NATO which continues today as he described in How Europe Underdeveloped Africa:

Needless to say, in the 1950’s when most Africans were still colonial subjects, they had absolutely no control over the utilization of their soil for militaristic ends. Virtually the whole of North Africa was turned into a sphere of operations for NATO, with bases aimed at the Soviet Union. There could have easily developed a nuclear war without African peoples having any knowledge of the matter. The colonial powers actually held military conferences in African cities like Dakar and Nairobi in the early 1950’s, inviting the whites of South Africa and Rhodesia and the government of the USA. Time and time again, the evidence points to this cynical use of Africa to buttress capitalism economically and militarily, and therefore in effect forcing Africa to contribute to its own exploitation. [emphasis added]1

Kwame Nkrumah had already warned in his 1967 Challenge of the Congo that there were at least seventeen air bases, nine foreign naval bases, three rocket sites and an atomic testing range operated by NATO in in North Africa, in addition to military missions in about a dozen other African countries, not to mention the exploitation of raw materials for the production of nuclear weapons occurring in the mines of Congo, Angola, South Africa and Rhodesia.2 Nkrumah called for the urgent need to counter the challenge of NATO in the strategy he outlined in his Handbook of Revolutionary Warfare which included the call for a military high command and an All African People’s Revolutionary Army (AAPRA).3

The example of Portugal, as one of the original members of NATO is worth exploring. The great freedom fighter of Africa, Amilcar Cabral, called Portugal “a rotten appendage of imperialism” he said, “Portugal is the most underdeveloped country in Western Europe. Portugal would never be able to launch three colonial wars in Africa without the help of NATO, the weapons of NATO, the planes of NATO the bombs- it would be impossible for them.”4

Cabral goes on to explain that the only reason Portugal was able to hold on to its colonies in Africa is because it had been a semi-colony of Britain since 1775 and Britain defended Portugal’s interest during the partition of Africa. Furthermore NATO, a creation of the U.S., uses Portugal and its colonies as part of the larger objective of domination of Africa and the world.5 Portugal conducted a vicious war against its colonies in Guinea Bissau, Cape Verde, Angola, and Mozambique much like the U.S. did in Vietnam. In both cases, colonizing powers used the most modern weapons including napalm and cluster bombing campaigns killing thousands, against guerilla armies that refused to bow down. The Portuguese dictator Marcelo Caetano was forced to give up economic interests in Angola to some of the NATO powers in exchange for the NATO armaments and supplies used.6 Yet, Portugal still lost the war against the heroic anti-colonial forces.

Imperialism has always used its strategy of divide and rule. To enable the acceptance of the idea of a ‘benevolent’ NATO, the colonial powers knew that they had to convince and recruit a neo-colonial class of indigenous Africans who would do their bidding. This divide played itself out in the national liberation movements between those who were friendly to imperialist forces and those who wanted a real break from colonialism. Nkrumah explains in Neo-colonialism, The Last Stage of Imperialism, the wide array of methods employed by neocolonialism, ranging from economic, political, religious, ideological and cultural spheres. To do this, NATO works hand in hand with other mechanisms of imperialism like the CIA 7 which was instrumental in the coup against the Nkrumah government and the murder of Patrice Lumumba.

The settler colony of Azania/South Africa would be another example of a NATO outpost. From the beginning it was obviously on the side of the Western/ NATO powers since it was essentially a colony of Britain and therefore was a NATOsurrogate. In 1955 South Africa and Britain formulated the Simonstown agreements which contained provision for the naval surveillance and defense of the African continent from Cape to Cairo. In spite of a purported arms embargo, NATO countries and Israel also provided South Africa with the necessary technology to develop nuclear weapons.

AFRICOM is actually a direct product of NATO via EUCOM, the U.S. European command. EUCOM is a central part of NATO and originally also took responsibility for 42 African states. In 2004 NATO ended a five-year period of expansion; in 2007 the EUCOM commander proposed the creation of AFRICOM. James L. Jones Jr. explains how he came to make the proposal for AFRICOM from his position as commander of EUCOM as well as commander of operational forces of NATO.

The U.S./NATO role in the destruction of Libya in 2011 is important to highlight because it offers some important lessons. First, U.S. imperialism and its western lackies do not accept any country that decides to be an independent force outside of its sphere of influence. Secondly, it also demonstrates how NATO can work hand in hand with other U.S./western dominated world structures like the UN. In 2011 the UN (resolution 1973) gave political authorization for a “no fly zone” and blockade of Libya purportedly to “protect” its citizens but which ultimately resulted in the destruction of Africa’s most prosperous country with the highest Human Development Index.

U.S. led NATO forces launched a bombing campaign that killed thousands of civilians and caused tens of billions of property and infrastructure damage. This shows that although U.S.-led NATO sometimes uses the UN for political cover, it has no problem illegally overstepping its UN mandate to commit its crimes against humanity and achieve its regime change goals. Even a few countries that abstained from the UN vote like China said they did so as not to offend the reactionary Arab League and the African Union which approved of the resolution. In this case indirect and direct cooperation between NATO, the UN, the AU, and the Arab League (which includes the GCC countries) shows the expansive and deeply woven web of U.S. and NATO reach.

“The U.S.-led NATO war on Libya will be remembered as one of history’s greatest crimes, violating the letter and spirit of international law and America’s Constitution. The Nuremberg Tribunal’s Chief Justice Robert Jackson (a Supreme Court justice) called Nazi war crimes ‘the supreme international crime against peace.’ Here are his November 21, 1945 opening remarks:

The wrongs which we seek to condemn and punish have been so calculated, so malignant, and so devastating, that civilization cannot tolerate their being ignored, because it cannot survive their being repeated.

Jackson called aggressive war “the greatest menace of our times.” International law defines crimes against peace as “planning, preparation, initiation, or waging of wars of aggression, or a war in violation of international treaties, agreements or assurances, or participation in a common plan or conspiracy for the accomplishment of any of the foregoing.”

All U.S. post-WWII wars fall under this definition. Since then, America [U.S.] has waged direct and proxy premeditated, aggressive wars worldwide. It has killed millions in East and Central Asia, North and other parts of Africa, the Middle East, and Europe, as well as in Central and South America.8

Those mentioned here are but a small sampling of NATO/AFRICOM’s bloody works in Africa’s past. NATO continues to operate under guise the of “training” and “humanitarian” peacekeeping assistance. Jihadist terrorist violence on the continent has increased since the founding of AFRICOM and NATO’s destruction of Libya resulting in civilian casualties and instability which the west has used as pretext and justification for the continued need for AFRICOM. As the Black Alliance for Peace’s AFRICOM watch bulletin reported, since the founding of AFRICOM there has also been an increase in coups by AFRICOM trained soldiers.

Consistent with what Nkrumah, Rodney and others warned of in the 1960’s and 1970’s NATO continues today in the form of AFRICOM facilitating wars, instability, and the corporate pillage of Africa. The Democratic Republic of Congo (DRC) for example is continuously plundered for its strategic raw materials such as cobalt, tantalum, chromium, coltan, and uranium etc. These minerals are strategically important not only for electronic devices but also for the technologies that drive the military industrial complex. AFRICOM continues to rely on its neocolonial African proxies to fight wars on its behalf in the DRC and throughout Africa to achieve its objectives. With the rise of China, the U.S./NATO now seek to ensure full spectrum dominance that seeks to shut China or any other country out of the competition to control global capital.