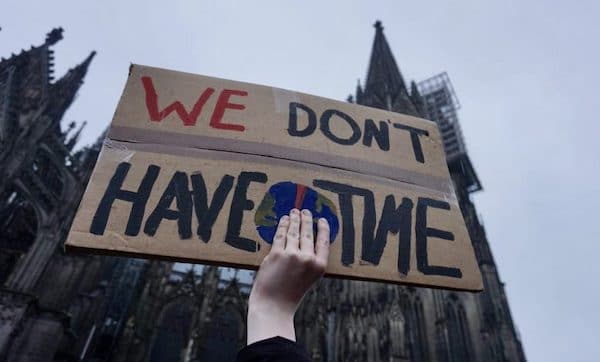 The latest UN Climate Report on impacts, adaptation and vulnerability released Feb. 28 once again urges immediate action and outlines the catastrophic effects that humanity faces with the continued lack of meaningful action. Compiled by 270 researchers from 67 countries, it outlines the impacts that are already unfolding and how these disasters will increase even if warming is limited to the 1.5 Celsius temperature threshold above pre-industrial levels.

The world is currently at around 1.1 C warming and we are already experiencing unprecedented heatwaves, droughts, wildfires, floods, and extreme weather events that has led to 84 million climate refugees and increasing food and water insecurity. These issues will only multiply as the world warms. The non-binding commitments that came out of the recent COP26 Climate Summit, have us on track for around 2.4 C warming, which would result in mass devastation and displacement for large portions of the global population.

The UN report criticizes the incremental changes currently being implemented as falling far short of the transformational shifts that are needed. The report goes on to lay out the catastrophic impacts of 2 C and 3 C warming and calls for immediate comprehensive action from global governments to rapidly reduce greenhouse gas emissions, along with financial support from the wealthy countries for those most vulnerable.

Due to inadequate infrastructure, weak social safety nets, and a greater reliance on the natural world, the climate impacts already being felt by countries of the Global South have much more devastating effects than climate impacts occurring in the Global North. This is due to the legacy of colonialism and neo-colonialism that has created a development gap that must be addressed by those most responsible for the problem–mainly the United States and the European Union.

While these UN IPCC reports are useful for climate activists and policymakers to point to, we must keep in mind that they take a more conservative approach than independent scientific reports. Since they rely on the consensus of hundreds of contributors and have a several year lag time between data collection and publishing due to the long peer review process, in reality, the situation is even more urgent than what the report outlines as a result of the rapidly changing conditions.

Meanwhile in the United States, even meager efforts to reduce greenhouse gas emissions that are only in the planning phase are seeing push-back from right-wing forces. On Feb. 28, the Supreme Court heard oral arguments in the West Virginia v. Environmental Protection Agency case that aims to undermine the EPAs ability to restrict greenhouse gas emissions from power plants, which are the second largest source of planet-warming emissions in the United States.

This case is a preemptive attack by Big Coal and its backers against a nascent regulation to be proposed by the EPA later this year that is expected to draw from the failed Obama-era Clean Power Plan. Opponents of the forthcoming regulation argue that the EPA should not have powers to set industry-wide regulations on power plants, but only to set regulations on individual power plants–undercutting the already weak federal authority to implement significant emissions reductions.

To reach the Biden administration goals of 50% emissions reductions below 2005 levels by 2030–which scientists urge is necessary to keep below 1.5 C warming –will take herculean efforts. The Biden proposal for meager climate actions that stalled out in Congress last year lacked a clear path to achieving this level of reductions, and would be further undermined if the West Virginia case wins. In general, this Supreme Court case would have far-reaching implications toward a future diminishing of the already insufficient powers of the EPA and other regulatory bodies.

The broader question is, how can the United States–which is responsible for the largest share of emissions globally based on historic and per capita contributions–ever achieve the reductions needed to stem climate catastrophe when corporations and their government backers have the power to undermine regulatory authority and legislation? Time and again we see fossil fuel corporations use their bottomless coffers to bully and buy off legislators and regulators through lawsuits, lobbying and campaign contributions. And at the same time, these corporations have spent billions of dollars on PR campaigns to spread disinformation about climate change and their role in creating this crisis.

Capitalism not capable of resolving the crisis

The weak regulatory mechanisms under capitalism and the lack of authority of the UN IPCC to hold countries accountable to their commitments fall far short of meeting the challenge that humanity faces. We need a socialist planned economy that can implement a long term plan to make the transformations that are needed for our very survival: a rapid and just transition off fossil fuels and a restoration of ecosystems to draw down carbon from the atmosphere, restore the water cycle and cool the climate.

We can see glimpses of what is possible in Cuba’s 100-year climate change adaptation plan and China’s rapid reductions in particulate pollution and massive investments in renewable energy that far surpass any other country. Only through a socialist planned economy can such comprehensive shifts occur in the rapid timeframe that is crucial.

Under free market capitalism, the government can only give incentives for corporations to implement technologies that aid in emission reductions through penalties or subsidies, in hopes that enough corporations will “do the right thing.” This haphazard, piecemeal approach to emissions reductions–that can be undone with a new administration, a midterm election, or a Supreme Court ruling–is a far cry from the urgent action that is needed and what is possible for humanity to achieve.

This is why it is crucial that we continue to build a broad people’s movement–a movement of the working class–to force concessions from the top, and in the end, to overthrow the corrupt and irrational system of capitalism and build a society that is based on the needs of the people and the planet.

Climate change is not some crisis that will happen far in the future. It is happening now. We collectively have the tools and knowledge needed to transform society from one that is based on a degenerative relationship with the planet to one that is regenerative and for the benefit of all life. This is what is needed for humanity’s survival. And the time to act is now.

Tina Landis is the author of the book Climate Solutions Beyond Capitalism.