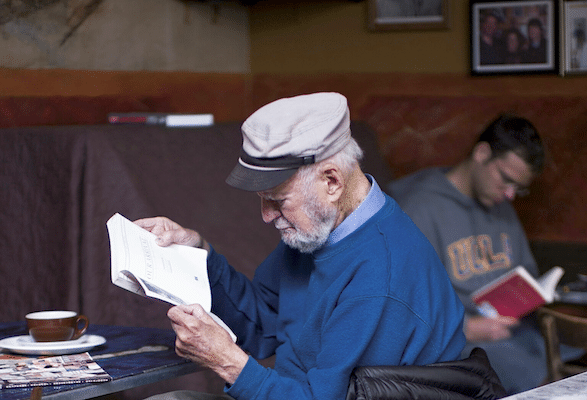 Pity the nation whose people are sheep

And whose shepherds mislead them…

Who allow their rights to erode

and their freedoms to be washed away

In the past few months, the United States has undergone a kind of transformation that one only reads about in history books–from a nation which imperfectly, yet stolidly, embraced the promise, if not principle, of freedom, especially when it came to that most basic of rights–the freedom of expression. Democracies live and die on the ability of an informed citizenry to engage in open debate, dialogue and discussion about difficult issues. Freedom of speech is one of the touch-stone tenets of American democracy–the idea that, no matter how out of step with mainstream society one’s beliefs might be, the retained right to freely express opinions thus derived without fear of censorship or repression existed.

In the aftermath of the Russian invasion of Ukraine, the Russophobia which had taken grip in the United States since Russia’s first post-Cold War president, Boris Yeltsin, handed the reins of power over to his hand-picked successor, Vladimir Putin, has emerged much like the putrid core of an over-ripe boil. That this anti-Russian trend existed in the United States was, in and of itself, no secret. Indeed, the United States had, since 2000, pushed aside classic Russian area studies in the pursuit of a new school espousing the doctrine of “Putinism,” centered on the flawed notion that everything in Russia revolved around the singular person of Vladimir Putin.

The more the United States struggled with the reality of a Russian nation unwilling to allow itself to be once again constrained by the yoke of carpetbagger economics disguised as “democracy” that had been prevalent during the Yeltsin era, the more the dogma of “Putinism” took hold in the very establishments where intellectual examination of complex problems was ostensibly transpiring–the halls of academia which in turn produced the minds that guided policy formulation and implementation.

Outliers like Jack Matlock, John Mearsheimer and Stephen Cohen were cashiered in favor of a new breed of erstwhile Russian expert, led by the likes of Michael McFaul, Fiona Hill and Anne Applebaum. Genuine Russian area studies was supplanted by a new field of authoritarian studies, where the soul of a nation that once was defined by the life and works of Dostoevsky, Tolstoy, Gorky, Lenin, Stalin, Sakharov, and Gorbachev was distilled into a shallow caricature of one man–Putin.

We had seen this play before, in the buildup to the U.S.-led invasion and occupation of Iraq, when the national identity of a people who traced their heritage back to the Biblical times of Babylon was encapsulated in the person of one man, Saddam Hussein. By focusing solely on a manufactured narrative derived from a simplistic understanding of one man, the United States papered over the complex internal reality of the Iraqi nation and its people, and in doing so set itself up for defeat. It was if Iraq’s long and storied history ceased to exist.

The impact this erasure of context and relevance from the national discourse was felt in the lead up to the decision to initiate what was, by all sense and purposes, an illegal war of aggression–the greatest war crime of all, according to U.S. Supreme Court justice and U.S. chief prosecutor during the Nuremburg War Crimes Tribunal, Robert H. Jackson.

My own personal experience serves as witness to this reality. As a former chief weapons inspector in Iraq from 1991-1998, I was uniquely positioned to comment on the veracity of the claims made by the United States that Iraq retained weapons of mass destruction capability in violation of its obligation to be disarmed of such. When my stance was deemed convenient to a narrative attacking a Democratic president, Bill Clinton, I was readily embraced. However, when my fact-based narrative ran afoul of the regime-change policies of Clinton’s successor, George W. Bush, I was cast aside as a pariah. 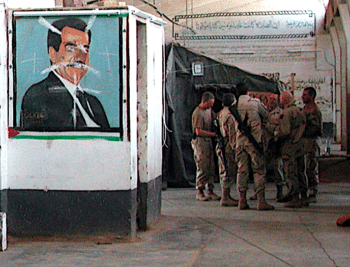 The politics of personal destruction were employed in full, and I was attacked for being a shill of Saddam and, perhaps worst of all for someone who served his nation proudly and honorably as an officer of U.S. Marines, anti-American. It didn’t matter that, without exception, the fact-based arguments I made challenging the case for war with Iraq proved to be accurate–at the time and place where the arguments could have, and should have, resonated greatest (during the buildup to the invasion)–that my voice had been effectively silenced.

I see the same template in play again today when it comes to the difficult topic of Russia. Like every issue of importance, the Russian-Ukraine conflict has two sides to its story. The humanitarian tragedy that has befallen the citizens of Ukraine is perhaps the greatest argument one can offer up in opposition to the Russian military incursion. But was there surely a viable diplomatic off ramp available which could have avoided this horrific situation?

To examine that question, however, one must be able and willing to engage in a fact-based discussion of Russian motives. The main problem with this approach is that the narrative which would emerge is not convenient for those who espouse the Western dogma of “Putinism,” based as it is on the irrational proclivities and geopolitical appetite of one man–Vladimir Putin.

The issue of NATO expansion and the threat it posed to Russian national security is dismissed with the throw-away notion that NATO is a defensive alliance and as such could pose no threat to Russia or its leader. The issue of the presence of the cancer of neo-Nazi ideology in the heart of the Ukrainian government and national identity is countered with the “fact” that Ukraine’s current president is himself a Jew. The eight-year suffering of the Russian-speaking citizens of the Donbass, who lived and died under the incessant bombardment brought on by the Ukrainian military, is simply ignored as if it never happened. 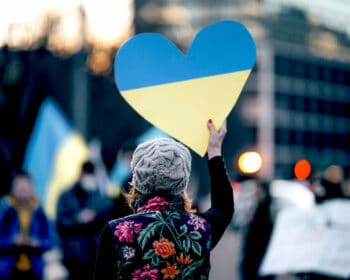 The problem with the pro-Ukrainian narrative is that it is at best incomplete, and worse incredibly misleading. NATO expansion has been consistently identified by Russia as an existential threat. The domination of the hate-filled neo-Nazi ideology of the Ukrainian far-right is well documented, up to and including their threat to kill the incumbent president, Volodymyr Zelensky, if he did not do their bidding. And the fact that the former president of Ukraine, Petro Poroshenko, promised to make the Russian-speaking population of the Donbass cower in the basements under the weight of Ukrainian artillery fire is well documented.

Unfortunately for those seeking to have an informed, fact-based discussion, dialogue, and debate about the complex problem that is Ukraine-Russian relations is the reality that facts are not conducive to the advancement of the “Putinism” dogma that has gripped American academia, government, and mainstream media today.

The Saddam-era tactics of smearing the character of anyone who dares challenge what passes for conventional wisdom when it comes to Russia and its leader is alive and well and living in the land of the free and the home of the brave. The age-old tactic of boycotting such voices by the mainstream media is in full-swing–the so-called news channels are flooded with the acolytes of “Putinism,” while anyone who dares challenge the officially sanctioned narrative of “Ukraine good, Russia bad” is excluded from participating in the “discussion.” 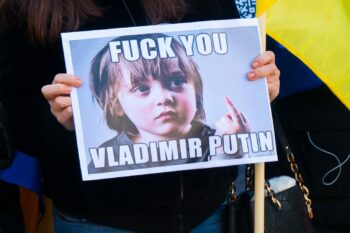 Demonstration in Stockholm against the Russian invasion of Ukraine in 2022. (Photo: Frankie Fouganthin, Wikimedia Commons)

And, in this age where social media has, in many ways, supplanted the mainstream media as the source of choice for most Americans, the U.S. government has colluded with the commercial providers of the major platforms used to share information to label anything that deviates from the official line as “Russian misinformation,” going so far as to label data derived from Russian sources as “state-sponsored,” along with a warning that supposes the information within is somehow flawed and dangerous to normal democratic discourse.

The ultimate sanction, however, came when the U.S. government pressured the corporate internet providers to shut down all Russian-affiliated media, leading to the closure of RT America and other media outlets whose accuracy and impartiality, upon examination, far exceeded that of their American counterparts.

Now America is taking it to the next level when it comes to the pandemic of Russophobia that is sweeping across the country, purging everything Russian from the national discourse and experience. Russian books are being banned and Russian restaurants boycotted and worse, attacked. The massive economic sanctions enacted against Russia and the Russian people has extended to what amounts to an erasure of all things Russian from the American experience.

Where will this stop? History shows that America is capable of healing itself–the national shame that was the treatment of Japanese- Americans during World War II is a clear demonstration of this phenomenon. However, the politics of cancellation which has emerged in the American body politic has never carried with it the kind of potential blow-back that exists in the case of Russia.

In the pell-mell rush toward cancelling Russia in the name of defeating Putin, emotion has replaced common sense, to the point that people are ignoring the fact that Russia is a nuclear power willing and able to use its Armageddon-inducing arsenal in defense of what it views as its legitimate national security interests.

There has never been a time when a national discussion has been more essential to the continued survival of the American people and all humanity. If this discussion could occur armed with the full range of facts and opinions relating to Russia, there might be hope that reason would prevail, and all nations would walk away from the abyss of our collective suicide. Unfortunately, the American experiment in democracy is not conducive for such near-term embrace of sanity and reason.

“Pity the nation,” Ferlinghetti wrote, “whose leaders are liars, whose sages are silenced, and whose bigots haunt the airwaves.”

Scott Ritter is a former U.S. Marine Corps intelligence officer who served in the former Soviet Union implementing arms control treaties, in the Persian Gulf during Operation Desert Storm, and in Iraq overseeing the disarmament of WMD.