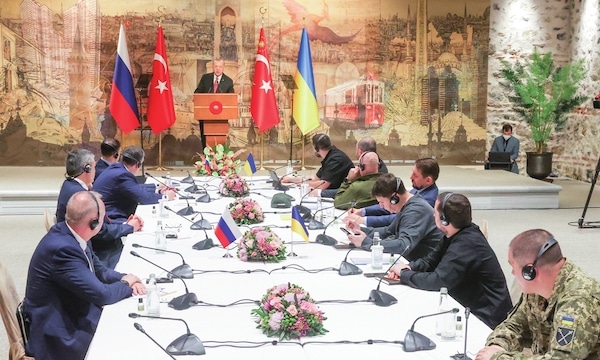 Turkey’s President Recep Tayyip Erdogan (center) speaks during a round of Russian-Ukrainian talks at the Dolmabahce Palace in Istanbul, Turkey. (Photo: VCG)

The latest round of Russia-Ukraine talks, held in Istanbul on Tuesday, have seen a “progress,” as the Russian delegation said Russia has decided to reduce military activities near Kiev and that they have received Ukraine’s proposal to become “neutral,” though observers said the most difficult part of the talks is the sovereignty issue and the two sides are still far off from a ceasefire.

After the three-hour meeting in Turkey, Russia said it has decided to drastically cut back its military activity near Kiev in order for peace talks to progress. According to TASS, top Russian negotiator Vladimir Medinsky said the talks were “constructive.”

Ukrainian negotiators told reporters that Kiev would agree to a neutral status if a security guarantee system is put in place, and they said Israel, Poland, Canada and Turkey could be among Ukraine’s security guarantors, according to Deutsche Welle. It is unclear whether the negotiations will continue the next day.

The Associated Press quoted Ukraine’s military as saying it had noted Russian troops’ withdrawals around Kiev and Chernihiv.

Medinsky said after the talks that Russia suggested a meeting between Putin and Zelensky could be arranged concurrently with the initialing of a bilateral treaty by the two countries’ foreign ministers, according to TASS.

Yang Jin, an associate research fellow at the Institute of Russian, Eastern European, and Central Asian Studies under the Chinese Academy of Social Sciences, told the Global Times that the words of Ukrainian and Russian negotiators, as well as the latest remarks from officials and diplomats on both sides, demonstrated both parties have a strong will and urgency to resort to a political solution.

Russia has now concentrated its troops in the Donbass region and Yang predicted that in the next phase, Russia will seek to solve the conflict mainly through political channels with a military method as a supplement.

Ukraine, after suffering enormous losses, also understood pledges NATO and the US made were unreliable and their assistance was far from enough to enable Ukraine to confront Russia, Yang said.

In a Sunday interview, President Zelensky said Ukraine was carefully considering “neutrality” as long as third parties can provide security guarantees for Ukraine, stressing “sovereignty and territories are priorities” in the talks.

The latest progress of the Russia-Ukraine talks has surprised some observers to some extent, but Chinese analysts also said a final ceasefire is too ambitious a goal to achieve, and they remain cautious since the matter about sovereignty is the most difficult part.

Cui Heng, an assistant research fellow from the Center for Russian Studies of East China Normal University, told the Global Times on Tuesday that “Since Zelensky’s remark of neutrality and non-nuclear status for Ukraine is based on sovereignty and territorial integrity, that would mean Russia’s withdrawal from the Donbass region, including Lugansk and Donetsk, which Russia had recognized as independent states.”

A compromise about the sovereignty matter on either side is unlikely in the near future, Cui said, citing the U.S. and the EU’s new round of sanctions on Russia.

During U.S. President Joe Biden’s Europe visit, the two sides agreed on a deal on liquefied natural gas (LNG) amid a new round of sanctions mainly on Russian energy, despite the   hefty bills for the EU.

Financial Times, citing four individuals briefed on the discussions, said the draft ceasefire document did not include three of Russia’s initial core demands – “denazification,” “demilitarization,” and legal protection for the Russian language in Ukraine.

A significant progress can only be made when there is an arrangement for the status of Lugansk and Donetsk that both sides can accept, Cui said.

Yang said there is a lot of work to be done on how the neutrality of Ukraine will be realized, which country will be the third-party guarantor, and what kind of mechanism will be established to ensure Ukrainian security.