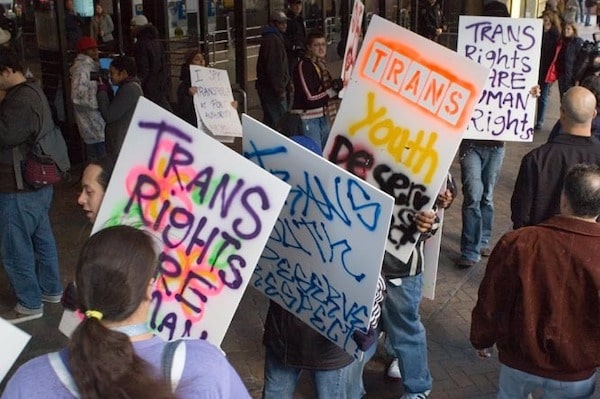 Donald Trump has been out of office for over a year now. But to many Americans directly threatened by the authoritarian Republican Party’s anti-minority, anti-immigrant, anti-woman, anti-LGBTQ and, well, downright anti-democratic agenda, this last year hasn’t represented much of a reprieve.

According to the Human Rights Campaign, 2021 was the worst year in recent history for state legislation attacking LGBTQ equality. A total of 268 anti-equality bills were filed, 27 of which were signed into law, including 13 that specifically targeted the rights of transgender youth. Even though 2022 is still relatively young, it’s already shaping up to be similar to 2021 in terms of discriminatory state legislation.

We’ve seen a spate of new 15-week abortion bans proposed in state legislatures, and an ongoing moral panic around the teaching of ‘critical race theory’ in public schools, which has helped fuel numerous book bans and even threatens to destroy the state university system in Texas.

America’s political system is structured so that a minority of the population (mostly white, mostly Christian, mostly right-wing) inevitably amasses disproportionate power at the federal level–for example, through equal representation by state in the Senate. This means that solidly Democratic California, with around 40 million residents, is represented by the same number of senators (two) as solidly Republican Wyoming, which has a population of around 600,000, less than 2% of the population of California.

At the same time, U.S. federalism allows individual states to set policies in a wide variety of areas, within limits set ultimately by the Supreme Court. Since Republicans have stacked the court with radical right-wing justices, politicising and, arguably, rendering illegitimate an institution that is supposed to be non-partisan, Supreme Court decisions cannot be expected to uphold equality or human rights protections for the foreseeable future.

And since the Supreme Court looks like it will allow states to pass all sorts of oppressive laws (but will not compel them to do so), state and local political battles are more important than ever.

As was the case last year, transgender minors are a key focus of state legislative attacks on LGBTQ rights this year. Most bills introduced so far have focused on two areas: banning trans schoolchildren from joining sports teams that align with their gender identity; or banning trans minors from accessing gender-affirming healthcare.

Arizona’s bill blocking medical care for trans youth has been narrowly defeated–for now–but Alabama and Tennessee legislators are considering similar bans. The Alabama bill stipulates that a violation would be an imprisonable offence, while an Oklahoma bill seeks to deny public funds to healthcare providers who offer gender-affirming care to minors, in addition to subjecting those providers to disciplinary action.

Meanwhile, the Arizona state legislature is yet to vote on a bill that would force public and charter school employees, including teachers, to disclose to parents any information a student may have confided to them about their “purported gender identity or requested transition if the student’s purported gender identity or expression is incongruous with the student’s biological sex”.

Parents would have the right to sue the school district for any failure to disclose. Such an extreme approach to parents’ rights might be compared to the UK’s infamous Section 28, which barred teachers from voicing support for queer pupils for 15 years (1988–2003), and was sold to the public under the slogan “parents know best”.

In choosing this enforcement mechanism, state lawmakers in Arizona and Florida seem to be taking a page out of the Texas GOP’s playbook. Texas pioneered this method of private enforcement last September when it banned abortion after six weeks.

Reproductive rights advocacy organisation Planned Parenthood says the new law “bans abortion after about six weeks of pregnancy–before many people even know they’re pregnant–and creates a bounty hunting scheme that encourages the general public to bring costly and harassing lawsuits against anyone who they believe has violated the ban.” A successful suit could net the plaintiff $10,000.

Late last year, the Supreme Court allowed the Texas law, including its private enforcement mechanism, to stand while a legal challenge makes its way through the court system–a highly unusual decision, as such laws are usually prevented from going into effect before the courts reach a final decision.

Texas is also responsible for one of the most horrific attacks on trans youth in the entire U.S.. Last week, governor Greg Abbott, following an opinion issued by the state’s attorney general Ken Paxton, called on teachers, medical professionals and the public to report any instances in which they suspect a child is receiving gender-affirming healthcare to the authorities as “child abuse”.

Failure to comply could result in criminal penalties. In theory, the governor and attorney general do not have the authority to so radically reinterpret existing law, and some Texas officials are already saying they will not comply. The Texas state legislature considered, but did not pass, a bill along these lines last year.

However, this move will undoubtedly make life a living hell for many Texas families who have trans or gender-nonconforming children, or who are merely suspected by their neighbours of doing so.

In pursuing initiatives such as these, the radicalised American Right is fostering a culture of censorship and denunciation that will have a chilling effect on speech in critical public institutions–in addition to doing severe harm to the groups that these bills and laws target, notably LGBTQ people.

Republicans have long understood that, in the U.S., state and local battles are often where significant amounts of power are gained and lost. Democrats and progressives will need to show up in force to push back against this authoritarian onslaught, in order to protect human rights in what looks like an increasingly bleak short- to mid-term future–especially for Americans who aren’t straight, cisgender, white, male and wealthy.