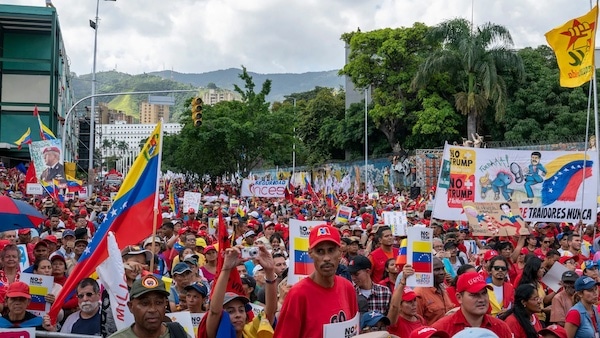 A protest against US sanctions in Caracas, Venezuela in August 2019 (Photo: Benjamin Norton)

The major Switzerland-based bank Credit Suisse has predicted that Venezuela’s real GDP growth will be 20% in 2022.

The prominent Western financial institution also forecasted that Venezuela’s real GDP will increase by an additional 8% in 2023.

These predictions come despite an illegal U.S. blockade imposed on Venezuela, which has starved the government of revenue, locked it out of the international financial system, and fueled an economic crisis.

The top United Nations expert on sanctions estimated that the Venezuelan government lost 99% of its revenue due to the Western unilateral coercive measures, which are illegal under international law.

“Unilateral sanctions increasingly imposed by the United States, the European Union and other countries have exacerbated the [economic crisis],” stated Alena Douhan, the UN special rapporteur on the negative impact of unilateral coercive measures on the enjoyment of human rights, after she took a two-week fact-finding trip to Venezuela in February 2021.

“The Government’s revenue was reported to shrink by 99% with the country currently living on 1% of its pre-sanctions income,” Douhan wrote, adding,

Remittances from abroad have decreased due to the blocking of state assets and the complexity of–and impediments to–bank transfers.

“The hardening of sanctions faced by the country since 2015 undermines the potential positive impact of the current reforms as well as the state’s capacity to maintain infrastructure and implement social projects,” the UN expert warned.

Venezuela has the world’s largest oil reserves and its economy is heavily dependent on production, but the U.S. blockade has made it very difficult for Caracas to export its crude. Many countries, even U.S. allies, fear being hit by Washington’s secondary sanctions if they trade with Venezuela.

Yet despite these suffocating and illegal Western sanctions, Venezuela’s economy is back on the path toward growth.

Ecuador’s leftist former president Rafael Correa tweeted a screenshot of an April 6, 2022 Credit Suisse report on Venezuela, which appears to be private, predicting 20% growth in 2022 and 8% growth in 2023.

“These are not typos!” the Swiss bank wrote.

If we are accurate, these might end up being among the strongest growth prints globally for these years.

In addition to being an influential politician, Correa is a renowned economist, with a PhD in economics.

Correa and some of his former officials have provided economic advising to the Venezuelan government during this difficult period under blockade by the United States.

In 2015, President Barack Obama signed an executive order declaring Venezuela to be a supposed “unusual and extraordinary threat to the national security and foreign policy of the United States.”

This executive order opened the floodgate for the U.S. government to impose grueling sanctions on Venezuela.

In 2019, President Donald Trump escalated the already existing U.S. sanctions on Venezuela into a full-on embargo. Washington and several European capitals also illegally froze and/or seized all of Caracas’ foreign assets, worth billions of dollars.

This brutal economic warfare supplemented a coup attempt that the United States was leading in Venezuela, forcing allies to recognize unelected right-wing opposition politician Juan Guaidó as supposed “interim president” of the country.

But the relentless U.S. economic war on Venezuela did stoke a crisis of runaway inflation.

The Chavista government has managed to rein in this hyperinflation. Venezuela’s inflation was just 1.7% in February 2022–lower than other countries in Latin America.

Credit Suisse’s prediction of 20% Venezuelan growth in 2022 and 8% more in 2023 shows that the worst of this U.S.-fueled economic crisis has passed.

Part of this recovery can be attributed to the massive rise in the price of oil.

Venezuela’s economy is very dependent on oil exports, and has been for a century, since well before leftist Hugo Chávez became president in 1999 and subsequently launched the Bolivarian Revolution.

Credit Suisse said its forecast “is largely based on the expectation that [Venezuela’s] oil GDP will rise more than 20%.”

But the Venezuelan government has put significant energy and resources into diversifying its economy beyond oil production.