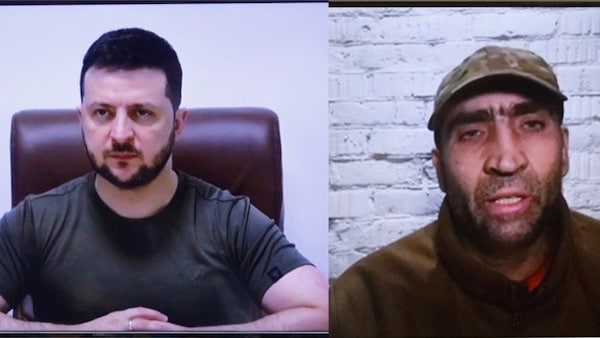 Ukrainian President Volodymyr Zelensky addressed Greek parliament on Thursday April 8 via video conference and provoked outrage after he shared a video byte of a neo-Nazi soldier from the notorious Azov battalion. In the video, the Azov soldier of Greek origin requested Greece’s solidarity to the Ukrainian government in the ongoing war with Russia. The Azov battalion is notorious for its neo-Nazi beliefs and practices.

The testimony of the Azov soldier was widely condemned by progressives in Greece. Parliamentarians from the Communist Party of Greece (KKE) boycotted the parliament session. The All Workers Militant Front (PAME), Communist Youth of Greece (KNE), and other Antifa groups also denounced the event stating that Greece’s solidarity with the people of Ukraine must not be taken as support to NATO’s puppet regime in Ukraine led by Zelensky and the neo-Nazi regiments it supports. They also asserted that by giving an opportunity to a neo-Nazi to address the Greek parliament, the New Democracy (ND) government in Greece had betrayed the goodwill of the Greek people and their solidarity towards Ukrainians.

In his speech, Zelensky asked the Greek parliament to extend full support to his government and tighten the sanctions on Russia. Later, in a short video, a member of the controversial Azov regiment defending Mariupol city, who self-identified himself as a person of Greek descent, testified against the Russian actions in the city.

In response to the speech, the KKE central committee stated,

the KKE from the first moment and in a clear way opposed the effort of the ND government and all other parties to identify solidarity with the people of Ukraine with the support of the reactionary President Zelensky, who is responsible, as well as Russia with the unacceptable and reprehensible invasion, for the suffering of the Ukrainian people. This support, with the blessings of the Euro-Atlanticists, also led to the disgrace that the parties of the NATO arc welcomed and applauded Zelensky and the representatives of the Nazi Order of Azov in Parliament.

“The ND government has huge responsibilities, as do the other parties that supported the choice for Zelensky’s speech in the Greek Parliament… mainly because of what is known about Zelensky and especially his relationship with the Nazi assault battalions. It is these battalions that are terrorizing the people of Ukraine and the minorities living in that country, including the Greek ones. In the Parliament, the official ‘unveiling’ that Zelensky and Azov ‘are together’ took place,” added the KKE.

Following the developments in the Greek parliament, the Progressive Party of Working People (AKEL) in Cyprus decided to boycott Zelensky’s address to the Cyprus parliament scheduled on the same day.

In response to Thursday’s events at the Greek parliament, Greek economist and the founder of the MeRA25 movement Yanis Varoufakis stated,

“President Zelensky disrespected Greece’s Parliament by ushering into it a Nazi. Likewise with the Cypriot Parliament–where he refused to engage with its Speaker’s comment that Cyprus too is a victim of an illegal invasion–even switching off his Skype in her mid-sentence…”, he added in his tweet.

Progressive sections in Greece have a history of fighting neo-Nazis. In October 2020, a Greek court delivered a historic judgement by declaring the Greek neo-Nazi Golden Dawn party a criminal organization and called for its ban while convicting Golden Dawn members for the murder of Greek musician Pavlos Fyssas and other hate crimes.