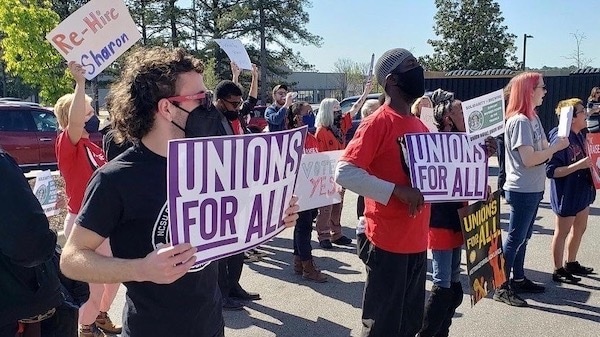 Labor organizers and trade unions hold a protest outside a Starbucks outlet in Raleigh, North Carolina, for firing a pro-union worker. (Photo: ThriveNC/Twitter)

The unionization drive forges ahead in Starbucks outlets in the United States. On Monday, April 11, workers at two outlets in the State of Massachusetts voted unanimously in favor of forming a union. Workers voted 14-0 and 16-0 in outlets in Brookline and Allstone in the Boston area.

The two new unions will be the first in outlets in the State, bringing the total of unionized outlets of the coffeehouse chain in the U.S. to 18. Another Starbucks outlet in Kansas City voted 6-0 in favor of forming a union but is awaiting a ruling on challenged ballots to officially declare a union. All these votes have been organized by the Starbucks Workers United, an affiliate of the Service Employees International Union. Dozens of other outlets across the country have either initiated a vote or are close to conducting one.

According to the group, since December 2021, when the first outlet in Buffalo voted to unionize, all stores in Ithaca in New York State, along with other outlets in different parts of New York and Kansas States, have unionized so far. This is despite large-scale union-busting attempts and hostility towards unionization from the top management of Starbucks.

On April 9, a barista working at a Raleigh outlet in North Carolina State was fired for allegedly breaking a sink on purpose. The barista in question, 20-year-old Sharon Gilman, was fired just days after workers in the outlet began sending their ballot votes to the National Labor Relations Board (NLRB) for a union vote.

Gilman is an organizing committee member for the unionization efforts in the store. She began working at the outlet in May 2020 and also trained baristas. Gilman claimed that she was being targeted for her union activities and that the allegations of purposeful damage leveled against her by the management were false.

Responding to Gilman’s expulsion, labor organizers and trade unions in Raleigh held a demonstration on Monday outside the Starbucks outlet where she worked.

Union busting is 🤢 We deserve better wages & workplace treatment. Is that so hard?

On the same day that Gilman was fired, Bloomberg reported that National Labor Relations Board prosecutors had held that the firing of seven workers in Memphis, Tennessee, in February was illegal and in retaliation to their announcement to form a union at the outlets. The terminated workers, who became known as “Memphis 7,” were an integral part of the union organizing committee at an outlet in the city.

The labor board prosecutors will be going ahead with a formal charge against Starbucks on the Memphis 7. According to reports, there are dozens of such cases filed with the NLRB where pro-union workers alleged that retaliatory measures were being taken by the corporate chain.

Workers at the two recently unionized outlets in the Boston area had also alleged retaliation from the management after they filed for a union vote. These retaliatory measures included drastic changes in work schedule, significant reduction of paid working hours, and increased reprimands for arbitrary offenses, along with other pressure tactics. Workers alleged that such moves were to intimidate them or force them to leave.

The allegations of union-busting have only grown after the return of Andrew Schultz as the interim CEO of Starbucks. Schultz has been on a tour to hold “collaborative sessions” with workers in different outlets to persuade them against unionization.

His anti-union hostility was made apparent during the tour last week in a confrontation with a pro-union organizer at the Long Beach Airport where he reportedly said,

If you hate Starbucks so much, why don’t you go somewhere else?

The unionization drive is nevertheless going strong. According to Starbucks Workers United, workers from over 200 of the over 9,000 Starbucks outlets have already approached the NLRB expressing their interest in conducting a union vote. Over 1,000 workers across these outlets have also become part of different organizing committees.